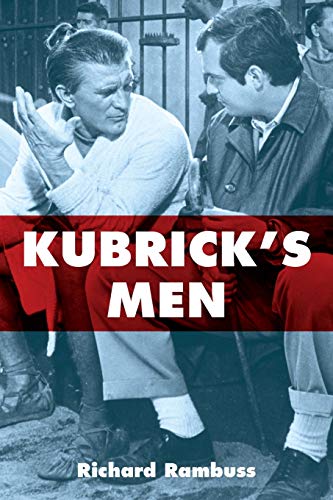 “There is more to say about war than it is just bad.”

Through their control of social institutions—a control based primarily on physical strength and the myth of male gender supremacy—men have structured the world we all live in. Have they (we) done a good job? The evidence, most incriminating our planet’s state of disease, suggests we have not.

For an explanation of why this has come to pass, one could not do better than to view and study the films of Stanley Kubrick. And this is what Richard Rambuss has done in his detailed critical analysis of Kubrick’s career as a visual artist, beginning with his work as a photojournalist employed by Look magazine, and ending with his final film, Eyes Wide Shut, an examination of how masculinity cannot withstand, or tolerate, an assertive femininity.

Rambuss has organized his study thematically, not chronologically. He opens with images of men that Kubrick delivered to the editors of Look for photographic spreads, notably a portfolio of a middleweight boxer whose social role, violence against other males, becomes a hallmark of Kubrick’s most striking films.

He then considers Kubrick’s films that treat men in war—a larger theater for man-to-man violence. This is followed by two chapters on the role of homosexuality as the shadow haunting masculinity throughout Kubrick’s oeuvre. Rambuss concludes with a chapter and coda devoted to Full Metal Jacket, which he regards as Kubrick’s fullest portrait of the deviations in the masculine character that both lead to and are intensified by war.

In his war films—Paths of Glory, Spartacus, Dr. Strangelove, Full Metal Jacket—Kubrick examines the various ways in which male cruelty and lovelessness is manifested. Generals who have arranged the execution of ordinary soldiers to cover up their incompetence are shown enjoying a full breakfast served on fancy china in the elaborately decorated dining room of a beautiful French chateau, while the men they have framed, over the objections of their field officer, are paraded out for their appointment with a firing squad. The drill sergeant Hartmann in Full Metal Jacket verbally abuses the Marine recruits in his charge with homophobic insults until one of them breaks and murders him. Jack D. Ripper (Sterling Hayden), the rogue Air Force General who has ordered a nuclear strike against the Soviet Union, confides to a befuddled British officer (Peter Sellers) his terror of giving his “life essence” (his semen) to a woman.

A notable feature of Kubrick’s career that Rambuss calls out is the wide range of genres in which Kubrick worked. In addition to the war film genre, his favorite, Kubrick made a black comedy (Dr. Strangelove), a horror film (The Shining), a science fiction film (2001: A Space Odyssey), a dystopian fantasy (A Clockwork Orange), a gangster film (The Killing), a family picture (Lolita), historical dramas (Spartacus, Barry Lyndon), and a romantic drama (Eyes Wide Shut).

Kubrick also made references to the western in two of his war films—the Slim Pickens character in Dr. Strangelove who sits astride the nuclear bomb and rides it to down earth like a bronco buster, and the character named Cowboy in Full Metal Jacket. The western, Rambuss points out, is another genre devoted to the male universe of violence and unchecked individualism.

In Kubrick’s use of all these genres there is a strong element of the grotesque. He distorts the conventions of these genres to emphasize different aspects of male deviation: pedophilia in Lolita, domestic abuse in The Shining, paranoia in Dr. Strangelove, unchecked desire in Eyes Wide Shut, sadism in A Clockwork Orange, homophobia in Full Metal Jacket, betrayal in The Killing. Collectively, these films present a dark, misanthropic view of the male. They also demonstrate Kubrick’s mastery of the film medium.

When Rambuss takes up the subject of homosexuality in Kubrick’s films, his analysis goes a bit off the rails. A self-described “gay romantic,” Rambuss finds traces of homosexuality in scene after scene. All it takes is a man without a shirt, or two men in a bedroom. Even the bare-chested Kirk Douglas in Spartacus is not spared the homosexual lens that Rambuss brings to his analysis. When we reach Full Metal Jacket in the final chapter of the book, we are treated to a digression on the desire functions of the anus, which Rambuss offers up as “the fundamental core” of male individuality. The general reader may flinch at the thoroughness with which this male portal and its input/output functions is discussed. Even HAL, the rogue computer in 2001: A Space Odyssey, is outed.

Rambuss’s narrow focus on the homosexual overtones that murmur throughout Kubrick’s depictions of masculinity yields some provocative insights about men’s behavior. Is war an outlet for men’s suppressed homosexual desires in which killing takes the place of sex? Is men’s violence a renunciation of the feared male embrace?

But this emphasis slights Kubrick’s more profound observation, developed throughout his oeuvre, that men are engaged in ritualized behaviors that have been passed down through the race from pre-history to the present moment. These ritualized behaviors, which Kubrick exposes in film after film, are designed to ensure male dominance in the evolution of the human story. This overarching trajectory of male control is captured at the beginning of 2001: A Space Odyssey in the famous jump cut from an animal bone hurled into the air by a murderous hominid to the spaceship that carries man into his technological future.

The assertion by Kubrick that men have institutionalized their control of humanity through the use of ritual (think the Catholic Church) is perhaps his most profound insight as an artist and may explain his legendary perfectionism (itself a ritual), and his status as an outsider and semi-exile from the American film industry, which distrusted him and honored him more for his technical brilliance than for his vision of fallen man.

And what of women in Kubrick’s films? Rambuss notes their scarcity, and the insignificance of their roles (Lolita, The Shining, and Eyes Wide Shut excepted). In 2001 women are seen only briefly, and in the limited capacity of serving men. But in two of his war films—Paths of Glory and Full Metal Jacket—women appear at the very end of the film and their appearances serve as a counterweight to the male animus that has dominated the narrative. In Paths of Glory, French soldiers gathered in a tavern harass and mock the German waitress who is serving them drinks. Suddenly she breaks into a lovely song. Her voice, her gentleness, shames the men into silence and tears. She humanizes them. Rambuss finds this scene sentimental, and perhaps it is.

The major battle scene in Full Metal Jacket occurs in a desolate urban landscape—the city of Hue. A sniper concealed in a bombed-out building is picking off the Marines one by one. They finally succeed in entering the building and shooting the sniper, who turns out to be a teenage Vietnamese girl whose ferocity and skill in battle is superior to the men’s. These endings underline the imbalances Kubrick finds in men’s psychology that need mending.

In Eyes Wide Shut, his last film, Kubrick shows us a woman, Alice, played by Nicole Kidman, who is the equal of her husband, played by Tom Cruise, who is at the time married to Kidman. This pairing suggests the possibility of human harmony based on gender equity, Kubrick’s final message to his audience.