Kosher Nation: Why More and More of America's Food Answers to a Higher Authority 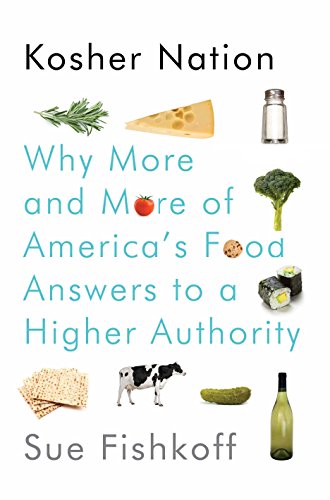 There are many ways to define “kosher.” The Hebrew root of the word simply means fit—food that is fitting for Jews to eat. It can be seen as food that separates Jews from nonJews by following a set of religious requirements. Or food “meant to remind us that we are not alone in the world, that we are part of an intricate, carefully balanced network of life and death,” in one of the explanations Sue Fishkoff offers in Kosher Nation. Food that makes Jewish bodies “into holy vessels,” in another of the book’s definitions.

According to the kabbalistic view, Fishkoff writes, “the Jew releases the divine energy trapped within [kosher food] and sends it back up to God, while the food keeps the Jew alive so he or she can pursue goodness in the world.” But perhaps the best definition is the one given by a young New Yorker who has admittedly strayed in his observance: “an exercise in neurosis.”

Indeed, as Kosher Politics illustrates in fascinating detail, living by—or even tougher, certifying—a kosher regimen can be as nitpicking, time-consuming, and downright irrational as the worst clichés assert. Traveling from New Jersey to California to China, Fishkoff found mashgichim, or official inspectors, peering at romaine lettuce with an industrial light box and a jeweler’s loupe looking for contraband bugs, and collecting the grape crust left in wine barrels to ensure that kosher and nonkosher crusts weren’t mixed. Does the owner of a kosher bakery follow the Sabbath laws at home? Did a nonobservant Jew or a Gentile touch the wine after the grapes were picked? In recent years, the Orthodox community and its official certifying agencies have gotten more and more strict.

Kosher neurosis goes beyond the physical aspects. For instance, Fishkoff describes a widespread, philosophical debate among Jews in their twenties and thirties who have set up independent minyanim, or layperson-led prayer communities: Is it more elitist to insist on kosher pot-luck meals—which means that those who don’t keep kosher can’t bring food—or to insist on nonkosher meals, which means that those who do keep kosher can’t eat?

Then there is the new movement of environmentally conscious Jews who are trying to combine an admirable but mind-boggling mix of ethical values: to eat food that is organic, local, raised in ways that treat animals humanely—and also kosher. Meanwhile, some Reform Jews are upset that many of their synagogues are turning kosher. They consider that “a betrayal of core Reform principles,” Fishkoff writes—principles that shun “ritual without ethical content.”

Well, maybe that’s not so surprising. Kosher Nation repeatedly points out that “it’s not just Jews buying this food.” More than 85 percent of kosher food products in America are purchased by nonJews and nonreligious Jews, according to Fishkoff. The list includes vegetarians, vegans, people with allergies to gluten, and those who are lactose-intolerant—all are in the class of people who keep kosher because they can trust the strict no-dairy, no-meat, no-wheat-at-Passover kosher labels. Similarly, both Muslims and Seventh-Day Adventists follow religious rules similar to the kosher ones. The largest group of all is people who simply believe “that kosher food is cleaner, safer, better.” In other words, the nitpicking has its benefits.

So perhaps (to paraphrase a classic ad for Levy’s rye bread): You don’t have to be Jewish to enjoy Kosher Nation. Certainly, people of all religions can agree that the research is prodigious and the writing easy to read.

The book has its flaws, of course. It doesn’t really look at the cost of this food or the growing doubts about whether traditional kosher slaughter is less painful than other types. Nor does it clearly spell out its main thesis. And please, haven’t we had enough books labeling the United States as a “Something Nation”?

Then again, it’s hard to adhere to the strictest level of glatt or cholov Yisroel kosher all the time, so we can cut Fishkoff some slack. Put Kosher Nation on a nice slice of rye with mustard, a pickle, and a glass of selzer. It’s well worth digging into.