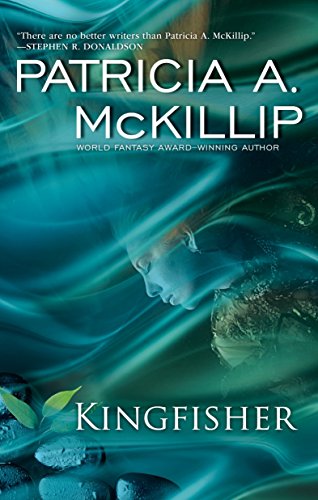 Trying too hard with Celtic mythology and a modern setting in KingFisher, McKillip fails to reach her full award-winning potential (she has won the World Fantasy Award previously), in this retelling of the search for the Holy Grail set in the modern day. Other mythologies are woven into this tale, such as the chef whose magical cooking leaves people hungrier. There is plenty of magic and mystery, but the mystery is more often in understanding the motivations of the characters and the plot points.

Each character has a counterpart in Arthurian lore: Pierce is Perceval; King Arden is King Arthur; the Knights of the Round Table are businessmen in suits who ride in limos and use cell phones; and Merle is Merlin, a shapeshifter living with his unhappy daughter. While naming is important in fiction and can carry with it a large literary past (to live up to or not), the naming the characters Arden, Pierce, and Merle, for instance, smacks of laziness. While the author’s intentions may not have been to hide the legacy of the characters or the tale, naming the characters to be either inclusive of their legacy or to be their own unique characters that thoughtful readers would realize were parallels would have been more satisfying.

Pierce lives with a sorceress mother in a place with the heavy-handed name Desolation Point. Strangers in a limo tell Pierce to visit Severluna at some point, and for some inexplicable reason Pierce decides he absolutely must.

When Pierce arrives at this fantastical place, everyone is preparing for the search for an artifact that is meant to return the kingdom to power. In this version of the Fisher King tale, it is the kingdom in desperate need of healing and only a magical artifact can save it.

King Arden lives in Severluna and turns out to be Pierce’s father. Pierce has a brother he doesn’t know about, and vice versa. Each parent has told the child living with them that the other parent is dead. Then there is a princess who doesn’t know she is a princess and a place called Chimera Bay, where, unsurprisingly, the name foreshadows the existence of an unreal creature.

The story transitions between different characters’ points of view. Each character has a major role to play in Severluna, and this is their story of how each of them plays this part and comes together, though the paths they take are different.

There is more than one story arc going on, but none of these are well done. The writing is too scattered—there is a feel about the novel that there is an urgency to wrap up loose ends by whatever is necessary in order to move the narrative forward (though it ends up feeling like a lurch forward rather than a smooth transitioning).

McKillip didn’t make this story her own, rather this is a badly patchworked version of myths and fairytales. Fans of McKillip’s previous work will be disappointed. The plot fails to be cohesive and the characters aren’t particularly engaging. The ending itself falls flat and leaves questions unanswered; perhaps this is a set up for a sequel, and if so, then one hopes that the next installment will be better edited for cohesion and cogency.

Readers who like their mythology to remain in the realm of “the past” (in no way modern) will be annoyed with McKillip’s conceit. This is an ideal plane or beach read, during which a reader can let her mind wander between passages, trip along the pages, and not miss out on anything necessary—then leave behind when done.