The King of Warsaw: A Novel 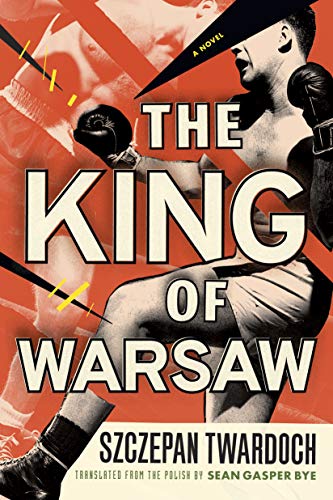 “Almost everything about The King of Warsaw is gripping . . .”

Mix The Godfather with Raymond Chandler’s The Long Goodbye, Leon Uris’s Exodus, and maybe a touch of Rocky, and the result will still not give the full picture of the powerful page-turner The King of Warsaw.

To add one more layer of complexity, the story is told 50 years later by a retired Israeli brigadier general named Moshe Inbar, whose father had been murdered by Jakub on orders from his boss Buddy Kaplica for failing to pay the protection money for his store. But Moshe admits that he is an unreliable narrator, frequently interrupting his reminiscences with comments like, “maybe that conversation happened another time. Maybe they were talking about someone else . . . I can’t remember everything.”

First published in 2016 by the award-winning Polish writer Szczepan Twardoch, the novel has now been translated into English by Sean Gasper Bye.

As the book begins, 17-year-old Mojzesz Bernsztayn—the future Moshe Inbar—is watching a boxing match that pits Jakub against the champion of the Polish anti-Semites. Jakub then takes Mojzesz under his wing, bringing him to meetings and to pick-ups of protection money, buying him expensive new clothes, and inviting the youth to move in with his family, including his wife and twin sons. Mojzesz describes himself as “Jakub’s shadow.”

Jakub is an unabashed hoodlum: When he’s confronted with a problem, his first reaction is to go for his gun or his fist. He drinks, snorts cocaine, and rarely cracks a book. Yet without effort, he is also “criminally charming, warm, sincere, and glowing with an uncertain quality that made every woman feel safe with Jakub. And they all were.”

But if Jakub and Buddy are powerful in their realm, the world beyond their limited neighborhood is turning increasingly dangerous for Jews, even Jews with guns. A Polish fascist faction is plotting a coup against the somewhat tolerant government. Newspapers print articles demanding that “We must simultaneously deprive Jews of full civil rights and impose a poll tax, with obligatory forced labor.” Nor can the bribed police be counted on to respect Buddy’s turf any longer.

Although Jakub’s Zionist younger brother tries to persuade Jakub to emigrate to Palestine, the boxer hesitates. In Warsaw, “I know everyone who walks their cobblestones, and everyone surely knows me,” he thinks. “On those streets I am Jakub Szapiro, policemen doff their caps to me, girls smile, frum [traditional] Jews indignantly avert their eyes, the fascists and market sellers fear me.”

Almost everything about The King of Warsaw is gripping: the range of characters, the rich descriptions, and the plot twists, including one big stunner.

However, this book is not for readers with weak stomachs. It goes into vivid detail about myriad kinds of punching, shooting, stabbing, dismemberment, prisoner abuse, and rough sex. Indeed, the author told a Polish interviewer that the book is about violence, “not about pre-war Warsaw, nor about Poles and Jews or the birth of fascism.”

In reality, it is about all of that, as well as love, guilt, and the way we try to control our memories. It should be required reading for the right-wing Poles today who still insist that their countrymen were never fascists or anti-Semites and that everything was the Germans’ fault.