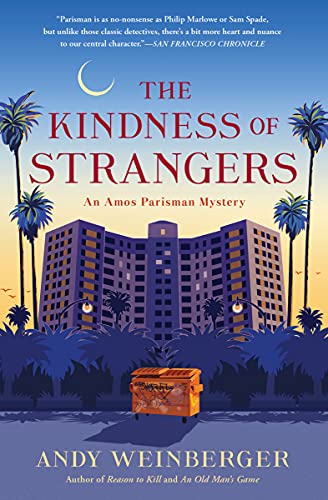 “This fine traditional L.A. crime novel with its Jewish flavor and its quandaries of the elderly provides enjoyable entertainment.”

Amos Parisman is feeling his age—he needs naps, he misses his wife (she’s in a care home with dementia), he has to be careful about remembering his keys. But that doesn’t mean he’s ready to quit the private eye work he’s done all his life. So when a “homeless lady” in is neighborhood is murdered and his police buddy Lieutenant Bill Malloy is open to his help, Andy’s eager to contribute. Anything that will dispel the fog of aimlessness and sorrow in his life is more than welcome.

The lieutenant half apologizes for the collaboration and hopes Amos doesn’t mind. He’s blunt: “Mind? Are you kidding? This is exactly the kind of case I need.” He admits, “It’s a police matter. Only I happen to know a little bit about her. And besides, Bill—this retirement thing?—between you and me, I’d rather be dead.”

Although Amos is not religious, he’s 100 percent Jewish in heritage and outlook, and his thoughts and conversations are sprinkled with scraps of Yiddish and wry comments about his mixed neighborhood in Los Angeles.

And that’s the fun half of this old-fashioned PI tale, because the other half, getting acquainted with a lot of homeless people and the not always pure-minded folks who “help” them takes a lot of Amos’s energy. That energy drain is also part of why his gentle romance on the side with a wealthy Jewish woman is pretty low key, mostly holding hands, kissing, and sharing a bottle of wine (much more for her). Amos has a moral code and he’s still in love with his wife, absent though her mind has become—and yet this new “girlfriend,” Mara, wants him to move in with her, to save money and be less lonely.

This might not be great for Mara’s granddaughter, Amos considers: “She’s a smart girl and has figured out that I’m quietly shtupping her grandma. His effort to hold Mara back isn’t exactly working, since she can point to his efforts to assist the police as being unpaid, so somehow worth less. Amos, on the other hand, says “The poor old woman in the dumpster? The throwaway?” Mara is blunt: “She’s not going anywhere.”

Maybe his PI work soothes his conscience, which is not exactly happy with the situation. Or maybe he’s just stubborn and doesn’t want to let go, the way he hasn’t let go of his wife. But isn’t that a good thing?

This fine traditional L.A. crime novel with its Jewish flavor and its quandaries of the elderly provides enjoyable entertainment, and is the third in Andy Weinberger’s own late-life second career (he’s a bookseller first of all). By the time Amos figures out what’s actually going on in the crescendo of deaths of the homeless, he’s got himself into a risky situation that someone his age should have known better about.

Then again, who should be better at making moral choices than an old Jewish PI who wishes he could always figure out what’s right? When the case finally ends, Amos says, “It’s not a good thing. The only good thing is that it’s over.”