A Kind of Freedom: A Novel 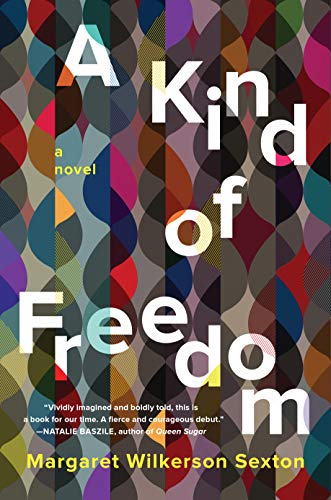 “Given the recent happenings in Charlottesville, Virginia, it’s hard to imagine a more relevant release date for this lovely, important book. This is a book for our time.”

It’s hard to believe that A Kind of Freedom is Sexton’s first novel. This ambitious book looks at three generations of a family in New Orleans: set in the mid-forties with Evelyn and Renard; the mid-eighties with Jackie and Terry; and 2010, post-Katrina, with T. C. and Alicia. While all three stories are deserving and compelling, the Evelyn and Renard love story feels the most crucial, as it leads to all the others.

When Evelyn first observes Renard, finding him attractive, her sister Ruby deems him inadequate because one of his pants legs is slightly shorter than the other.  This notion of unevenness, or of lack, or of any random wrong, runs throughout the book. By referring to this man in the opening scene several times as “the uneven man,” Sexton initiates a tone for the entire novel, in which characters are swimming upstream, fighting for basic rights, struggling against the internalized prejudices of their parents, measuring, always measuring.

With each repetition of “the uneven man,” Sexton asserts that Renard’s socio-economic status is tantamount to disability. He’s uneven. And it’s not a thing that can be fixed with a needle and thread.

When Evelyn’s sister Ruby says, about the man Evelyn is drawn to, “Too brown for most people . . .” we see gradations of racism. Evelyn and Ruby are Creole, and as the daughters of a doctor, they live in a part of New Orleans that Renard’s family would never be able to afford. Every character is aware of these differences and the obstacles they create. Before she’s even had a single date with Renard, Evelyn worries about how she will convince her mother and father that he’s a good man, worthy of her heart.

Readers are immediately on this man’s team; Sexton writes in such a way that makes us yearn for Evelyn and Renard to be together: “It wasn’t what he was saying, but the way he was parceling out his story, like a mother would cut meat for a child, that made Evelyn’s heart feel fragile.”

“Since that day was a Friday, she had to go the whole weekend without seeing him again. That was fine because she had memorized him.”

“From then on, Evelyn woke up each day with a renewed tolerance for the world; the feeling she’d been searching for her whole life had been missing because she hadn’t met Renard, and now that he was here, she could grasp the higher octave of joy her solitude precluded.”

The outcomes in this book unfold as inevitably as does a pregnancy. By reaching into the futures of these characters, into subsequent generations, it’s like Sexton provides readers with a crystal ball: This is what will happen. And by ending the story back in 1945, Sexton brings readers back to the moment before it is all set in motion. Evelyn’s pregnancy equals both potential (her girl will be a doctor!) and burden (something to hide under a wedding dress).

By ending with Renard and Evelyn’s story, Sexton implies that every struggle, every heartbreak, every kept or broken promise in the lives of these people, is embedded or encoded in this single act—this marriage. Readers glimpse at futures the characters don’t yet know. One might wonder at first why the author didn’t go with a straightforward chronological narrative, but closer examination reveals this structure to add such subtlety and purpose—this whole story being a peek inside Evelyn’s womb, its own crystal ball, where all that is to come awaits.

From the Jackie and Terry section:“. . . whatever pain had driven him out had managed to touch her, too, and she didn’t have crack to deliver her from it… She poured her coffee, sat down on the sofa and stared ahead at the TV screen. The Price is Right had just started; someone was betting on a two-seater sofa, a nice leather one Jackie knew she could dress up with pillows and throws from Macy’s, but the woman on the show was betting too much, $999 when a sofa that size, nice as it was, wouldn’t go for more than $500. Jackie wanted to intercede, cry out Don’t set your sights too high, girl, it won’t hold, but she just sat in silence.”

Each of the three sections in this multigenerational novel might be interpreted as warnings against and the repercussions of setting one’s sights too high. Beautiful writing.

When T. C. gets out of prison just in time to see his son born, the situation feels redemptive, like a fresh start. There’s even the possibility of a real job in his aunt’s law firm, a way to get out of growing weed. In the glow and deep love of the moment, T. C. kisses his son’s closed eyelids and says: “This is your mama. And I’m your daddy, and we love you. We gon’ always be here for you, you hear? No matter what.”

A few days later, as T. C. and his friend Tiger are getting their crop ready to sell, T. C. mentions his plans and dreams. Tiger delivers a sobering speech about reality—how things can look one way in the morning, and how they look different later in the day: “You feelin’ yourself, you got the whole day ahead of you, but let’s see what you sayin’ tonight, the world weighing on your shoulder. Shit look different in the twilight, don’t it?” The vow T. C. makes to his infant son Malik—how his mama and daddy will always be there for him—is spoken in the morning of a life. But when twilight falls on that child’s life, that grown kid, where is that parent? That promised love?

Toward the end of the book, Sexton brings us back to the opening detail of Renard’s uneven hem, which, despite someone trying to fix it, still looks off to Evelyn.  Sewn into that off-kilter hem is all her doubt about her choice, about their future, but only a few paragraphs later, Sexton gives us an ending that soars with hope.

Given the recent happenings in Charlottesville, Virginia, it’s hard to imagine a more relevant release date for this lovely, important book. This is a book for our time.