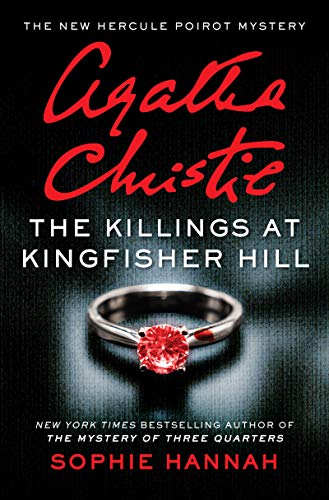 “Close enough to Christie’s own style that the reader could segue from Murder on the Orient Express into this present novel without a stumble.”

Hercule Poirot has been hired by Richard Devonport to prove his fiancée, Helen Acton, already tried and found guilty of murdering his brother, Frank, didn’t commit the crime. With his friend (and the story’s narrator) Inspector Edward Catchpool, he is on his way via Kingfisher Coach to the Devonport estate in Surrey when an odd thing happens.

A woman refuses to take the only seat left, saying she’ll die if she does. In fact, she actually stops the train so she can get off.

“He said I’d be murdered,” the woman wailed. ‘Mark my words,’ he said. ‘You heed this warning or you won’t get off that coach alive.’”

Poirot himself has an even odder experience. The woman sitting next to him in the coach tells him she has committed a murder, going into great detail and how and why she did it.

“I loved him very much. Moe than I ever loved anyone, and I murdered him.”

“What person who has deliberately taken the life of another would describe her crime in such detail to none other than Hercule Poirot, who is known to bring murderers to justice?”

Apparently, he has no answer, for he doesn’t tell Catchpool to arrest the self-confessed murderess.

Once arriving at Kingfisher Hill, however, the two women are forgotten, but not for long. When Poirot is introduced to the Devonport family, he discovers his homicidal seatmate is none other than Daisy Devonport, Richard’s sister, who readily admits the man she murdered was her brother, Frank.

“Let us suppose that both women are innocent: Your sister and Helen Acton. Each confession cancels out the other and there would be no way to discover what really happened.”

In a little while, a body is discovered and it turns out to be Winnie, a Devonport servant, who is revealed to be the frantic woman who insisted on leaving the train.

How does she fit into the case? Or is her death completely separate?

By now, Poirot has discovered the Devonports to be a truly dysfunctional and complicated family.

Brother Frank had embezzled money from his father’s company to help out a friend with a terminally ill father. That friend, Oliver Prowd, is his sister Daisy’s’ fiancé. Helen, convicted of killing Frank, was engaged to him at the time, but she gives her motive for killing him as that she actually loves Richard. After his death, though she is imprisoned, she agrees to marry Richard.

Daisy’s excuse, incidentally, is that she loved her brother but couldn’t countenance that he’d committed a crime.

Richard characterizes Daisy as someone who acts outrageously when she becomes bored.

“She loved to shock and be the center of attention.”

Did Daisy confess to her brother’s murder simply because she wanted to create confusion? If so, why confess to Poirot before she learned he was going to Kingfisher Hill? Everything Daisy and Helen says seem to contradict each other and actually cancel out each other.

Both women seem desperately eager to be found guilty.

All this should distract Poirot from his original intention. Namely, to prove Helen Acton innocent of the crime, but it doesn’t.

It merely slows him down a bit.

Newcomers to the Christie franchise, unfamiliar with the process of Poirot’s “little grey cells,” may be more difficult to please, as this case unfolds and is by turns, bewildering, confusing, and repetitious.

Throughout the story, Poirot makes a statement, then explains and repeats it before asking Catchpool his opinion. Whereupon, the inspector repeats what was told him, ending with the fact that he has no opinion and no idea what happened. This occurs again and again until the poor reader may not recall what the original intent of the investigation is about. When the final unveiling of the murderer is made, it may seem much ado about nothing, for the reason for the crime seems very weak indeed.

It might not be a bad idea to read some of the other Poirot novels written by this author to get into the manner of presentation before taking up this one.

Nevertheless, the flow of the story is suitably Christie-like and the narration by Catchpool, now stepping into the role formerly held by the ubiquitous Hastings, as well as Poirot’s own turns of phrase and presentation, are close enough to Christie’s own style that the reader could segue from Murder on the Orient Express into this present novel without a stumble.

This novel is as circuitous and complicated as any classic Christie novel and Christie fans will applaud.