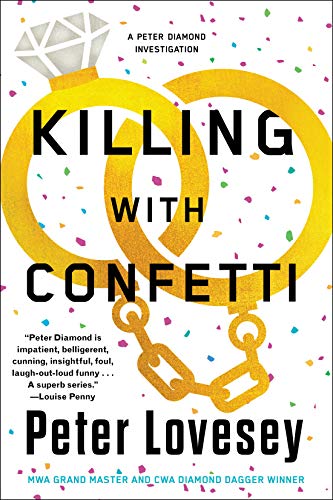 They say crime doesn’t pay. Well, neither does being good at stopping crime and being well known for it inside your police force. Because then you get the plum assignments—in this case, a rotten plum. Or, as Peter Diamond says, “A handsome invitation to the shittiest assignment ever.”

Diamond is head of the CID in Bath, England. His rotten assignment is to bodyguard a notorious criminal, fresh out of prison, at the high-profile wedding of the criminal’s daughter. The rotten part is: The groom is son of the Deputy Chief Constable, a high-ranking, politically sensitive law-enforcement position.

It’s a twist on Romeo and Juliet, in that the lovers are destined to live happily ever after, but their fathers are direct, hostile enemies on opposite sides of the law.

And then there’s another twist: The criminal is so hated and feared by so many people that there’s a good chance someone will take a potshot at him while he’s a perfect target during the wedding’s very public moments. Nobody can anticipate who, or from what direction he’s coming, making a security nightmare for Diamond and his team.

In the final twist, the assassin gets assassinated himself, so that the crime Diamond expected to be investigating turns out to be something altogether different.

Readers are led into this scenario through alternating viewpoints. The story opens with a prison riot, which seems to be a story unto itself. Unbenown to us, the key players are being introduced before they go offstage to tie up things later.

Finally, at chapter seven, the series lead character Diamond enters the picture. But not for long: the narrative viewpoint changes back to the assassin, building suspense because the reader knows what’s happening that Diamond must find out from a position of disadvantage.

Then the assassin goes silent, and a whole ’nother story begins.

These twists characterize the misdirection that makes the mystery interesting and page-turning. They keep going to the surprise ending, at which point all the clues become obvious in hindsight.

The crafting of all this is superb, and consistent with the author’s handling of the series. Killing with Confetti is book 18 in Lovesey’s Peter Diamond mystery series, and it has yet to let readers down. This volume can be read on its own, or as the latest case in the series. Either way, it delivers the same satisfaction as all of its predecessors.