Killers of a Certain Age 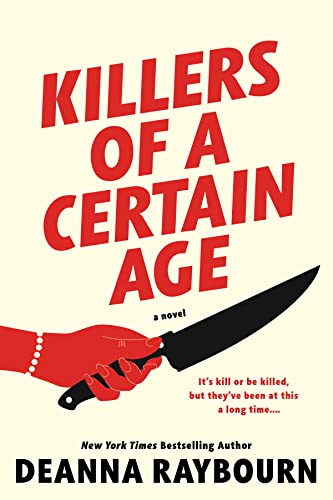 To understand and appreciate this novel, you need to move past any aversion you might have to the idea of female killers. Women as paid assassins, murderers for hire . . . what a switch from the norm! So often, women in fiction are nurturers, victims, or supporting roles. It’s rare to find them as lead characters on the action end of fatal weapons, with ice-cold hearts.

But this story gives us a look at how you can be ice cold without losing your soul, and otherwise be a normal woman who happens to be in the killing business. In fact, exploration of that paradox is what makes this inversion of a typical thriller work.

Four young women—Billie, Mary Alice, Helen, and Natalie—are recruited by a secret organization, code-named the Museum, to fight evil by eliminating its perpetrators. But the organizers understand that it takes one to know one. “That is rather that point,” says the recruiter. “We don’t make killers. We simply find them and point them in the right direction.”

The Museum harnesses a new strategy by employing only women, training them in all forms of death-dealing and maneuvering outside the system. These women become almost superhuman, and successfully ply their trade for 40 years.

Over those decades, though, the organization changes and its elite lady assassins become obsolete. They are offered, as a retirement gift, a luxury cruise—only to discover it’s a trap intended to knock them off in one grand swoop.

Fortunately they are trained too well, and just because they’re not young and sexy anymore doesn’t mean they don’t know how to fight back. So the story becomes a kill-the-killers tale, where the team is forced to remove the evil in the very organization that created them.

Off the story gallops into a nail-biting thriller, a high-end cat-and-mouse game around the world. The simplest mistakes have nigh-deadly consequences for the women, and often deadly consequences for their adversaries. Everyone’s cleverness is mind-boggling (aided by the unlimited funds that always seem to underwrite such capers in fiction). Meanwhile, allies prove to be enemies, and enemies allies, in a constant whirl of turnabouts.

Readers of Deanna Raybourn’s historical romances, particularly the Veronica Speedwell series, will recognize the author’s voice in this contemporary change of pace, along with the lead character’s intelligence, verve, and individualism. This book, however, differs not only in content from the author’s other works but also in its structure from almost every author’s works.

The narrative shifts between backstory written in first-person present tense, and the current storyline in third-person past tense. This is so uncommon in modern fiction that it takes a few chapters to get used to and creates both positive and negative effects.

On the upside: We get emotional immediacy in how and why the team is recruited, making the character motivations comprehensible and allowing reader sympathy. When the viewpoint and tense switch, we get the intellectual comfort that comes from the familiarity of conventional narrative for action novels.

On the downside: It’s hard to remember that the ladies are senior citizens. In the current storyline written in past tense, their dialogue or internal thoughts remind us that it’s harder for them to run and jump and fight. But that doesn’t come across on the page convincingly, because we really get to know them during the backstory in present tense, when they’re in their twenties.

Their reflections or regrets at 60, while adding important depth to the novel, almost jar sometimes because the youthful energy carries all the way through.

That’s a minor flaw in the technical success of this gutsy novel. It’s hard to think that the book won’t be a commercial success, too, given how well it’s crafted and how many reader types and age groups will find interest and entertainment between its covers. The big question is whether it will continue in a series. If so, a goodly number of readers will follow along.