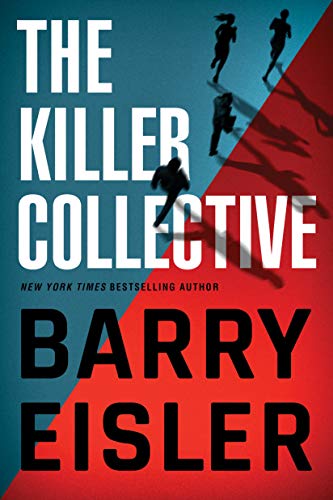 “The Killer Collective binds it together into a blazing adventure of espionage escape fiction, perfect to start the new year.”

Master of suspense Barry Eisler links two of his series together in the hard-hitting and compulsive thriller The Killer Collective and uncovers much more than a plot to kill a police investigator. Emotions ride high, and ironically, in the midst of explosions of all sorts, Eisler’s two unusual protagonists tangle with matters of the heart.

Readers of Eisler’s long-running Rain series will eagerly see the half-Asian John Rain discover he’s not really happy with retirement; when he gets a job offer, he sniffs the wind like a fire horse called back to the station. But the assignment involves killing a woman, a violation of his set-in-stone and well-known rule. Why would anyone think he’d accept such a job?

Soon both Rain and Livia are in touch with a former asset they’ve worked with, Dox, himself a former marine sniper. When the team expands to include Rain’s estranged lover (a Mossad agent), a pair of black-ops soldiers, and a formidable former commander, Special Operations legendary Colonel Scott Horton, the mixed motives and conflicting agendas make every planning session into a potential minefield of harsh opinions and strong actions.

Rain can see the dangers clearly—it’s part of his expertise, watching for clues into how people operate, and finding a way to get his goals met. Here, he’s assessing the interaction between SpecOps professionals Larison and Treven:

“Larison was watching Treven. The irritation was gone from Larison’s expression, replaced by an odd flatness. I could imagine his calculus: If you’re not with us, you’re against us. And I could imagine the destination to which that logic must have already led him.

“As formidable as he was, that was Larison’s one weakness: you could read the danger he radiated. If I had decided to kill Treven, there would have been no changes in affect. I would have kept trying to cajole him right up until it was done. But when Larison made a decision, if he wasn’t ghosting up on you from your flanks, you’d have a chance to know his intent before he acted on it.”

Dangerous as these allies are, Rain and Livia are at least as dangerous to those around them, each in pursuit of a different form of justice. And each is someone you need to stand well away from, if you’re having to wake them up, because they always come awake fighting.

And if, afterward, the notion seems unlikely, the collective too dangerous, the odds of success against it—that part won’t matter. The fun of Eisler’s super thriller is in the excitement, the chase, and the survival. The Killer Collective binds it together into a blazing adventure of espionage escape fiction, perfect to start the new year.