To Kidnap a Pope: Napoleon and Pius VII 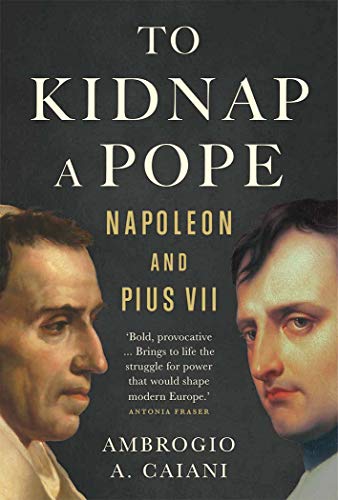 “Historian Ambrogio Caiani’s riveting new book To Kidnap a Pope deftly explores the test of wills between the French emperor and Roman Catholic pontiff in the aftermath of the French Revolution and in the midst of the Napoleonic Wars.”

Napoleon Bonaparte conquered much of Europe in the late 18th and early 19th centuries, but he could not conquer the Catholic Church, thanks largely to the courage and willpower of Pope Pius VII. Historian Ambrogio Caiani’s riveting new book To Kidnap a Pope deftly explores the test of wills between the French emperor and Roman Catholic pontiff in the aftermath of the French Revolution and in the midst of the Napoleonic Wars.

The seeds of this conflict were planted during the French Revolution. The leaders of the French Revolution had nationalized church lands, closed seminaries, and required bishops and priests to take an oath to support France’s Constitution. Bishops and priests were among the thousands of victims of revolutionary courts. Caiani calls this an attempt “to extirpate the church of Rome, and to create an alternative secular culture” and a “war against God . . . [and] religion.”

The revolutionary Terror was succeeded by the Directory and later the Consulate. French armies were on the march throughout Europe, including Italy, where the Papal States were invaded, the College of Cardinals were exiled from Rome, and Pope Pius VI was taken prisoner (he died as a prisoner in Valence in August 1799).

Napoleon returned to France from Egypt in October 1799 after suffering one of his rare military defeats, though Caiani notes that “he was feted in the press as a new Alexander the Great.” Napoleon was made First Consul. In March 1800, Cardinal Barnaba Chiaramonti was elected Pope, taking the name Pius VII.

Napoleon was determined to make peace with the Catholic Church, but on his terms. Napoleon, Caiani notes, was not anti-religion or anti-clerical. After his great victory over the Austrians at Marengo, Napoleon in a speech in Milan at the Duomo told the city’s priests that “Without religion one walks constantly in darkness,” and he pledged to preserve the Roman Catholic religion. “[O]nly religion,” he continued, “can give the state firm and stable support.”

Pius VII was equally determined to reestablish papal control over church lands and clergy. He understood, also, that papal independence depended on the Pope’s control over the Papal States.The pope was (and is) both the head of a universal church and a head of state. In the early 19th century, the pope’s state was controlled by French arms, and his church in France was divided between so-called Gallicans who supported a “national church” and supporters of Rome.

The test of wills between Napoleon and Pius VII continued virtually unabated between 1800, when the negotiations for a Concordat began (which was finalized in 1801), and 1815, when Napoleon suffered his final defeat at Waterloo and was exiled to St Helena. Napoleon wanted the church to be subordinate to the state in France and throughout his growing empire. Pius VII wanted the church to be independent of state control everywhere.

It became increasingly clear that Napoleon viewed the 1801 Concordat, in the author’s words, as “the blueprint for French imperial hegemony over religion.” Napoleon, especially after he crowned himself emperor in 1804 (with the Pope watching), Caiani writes, “wanted to bend Catholicism to [his] will.” When Pius resisted, the Napoleonic state became more repressive and assumed more authority over the church.

Caiani notes that Pius VII and his closest advisers prepared contingency plans for passive resistance and governance of the church in 1806 and 1807 in the event that the pope and members of the Curia were arrested or exiled from Rome. Pius, in other words, had the church prepared for the worst.

And the worst happened on July 5–6, 1809, when French soldiers under Napoleon’s orders kidnapped the pope from the Quirinal Palace, which overlooked St Peter’s Basilica. French forces occupied Rome. The papal flag was lowered from Castel St Angelo and replaced by the French Tricolour. Caiani calls this “one of the greatest miscalculations of [Napoleon’s] career” and “one of the great turning points in history.”

Pius VII would be Napoleon’s prisoner for nearly five years (in Savona and later Fontainebleau). During those five years, his health deteriorated, but his courage and willpower remained firm despite periods of complete isolation from the outside world. He refused to accept Napoleon’s various proposals for state control over the church. And Napoleon’s persecution of the pope, writes Caiani, resulted in transforming a “broadly sympathetic French Church . . . into a breeding ground for opposition.”

Napoleon’s imperial ambitions ultimately led to his downfall, the freedom of Pius VII, and the reestablishment of papal authority over the French Church and other lands that Napoleon had conquered. Napoleon’s disastrous invasion of Russia in June 1812, the subsequent retreat of his armies from a burning Moscow, and his defeat at the Battle of the Nations in October 1813, effectively sealed his fate. He was deposed as emperor in March 1814, and exiled to the island of Elba, off the coast of Tuscany. He escaped from Elba, reformed his army and suffered his final defeat at Waterloo. He would not escape from St. Helena.

Pius VII’s imprisonment ended in January 1814, and he reentered Rome on May 27, 1814. He went immediately to St. Peter’s Basilica to give thanks to God for his deliverance. He created a special inquiry called the Congregation of Disorders to identify those members of the church who had collaborated with Napoleon. After Napoleon was exiled to St. Helena, Pius intervened with British authorities to improve the former emperor’s living conditions. Pius, writes Caiani, “pleaded in favour of the very man who had persecuted him unremittingly for five years.”

Caiani concludes this important and wonderfully written book with the observation that in depriving the pope of his temporal power, Napoleon led the Papacy “to its undisputed and infallible mastery over the Catholic world.”