The Kid: A Novel 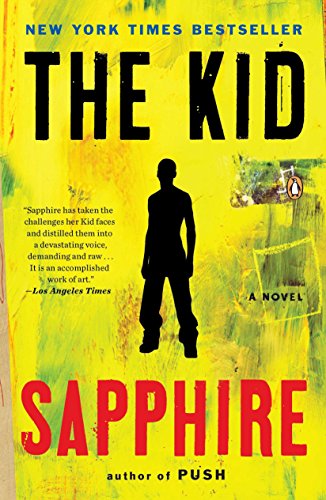 “. . . brilliant and gritty and urban . . . the most brutal coming of age story imaginable.”

The Kid is by far the most disturbing novel I have ever read.

When we first meet Abdul, he is nine, and it is the occasion of his mother’s funeral. His mother was the main character Precious of the landmark novel Push. She has died of AIDS, and her son is orphaned. It is a beginning that would seem to hint nothing worse could possibly happen to this child and yet, each time in this tragic book that Abdul seems to sink to his lowest point, something even more horrendous drags him further into the abyss.

In many ways, the story of Abdul Jones seems unreal, but it is gritty and devastating, a sad social commentary on many broken social systems such as child welfare—and not just in the neighborhood of Harlem. Sadly, while I believe Sapphire may have exaggerated character and plot to make a point, for an AIDS orphan in America Abdul’s story is probably not that far off the mark.

While it appears initially to the boy that he might, in his confused state, be taken into the care of his mother’s friend, Rita, a woman he calls Aunt, the social services system quickly puts an end to that childish naivete. The foster home he is moved to is horrific beyond description and from there on Abdul, also known as J. J., travels deeper into a hellish cycle of physical and sexual abuse that seems unending. Abdul is moved like a pawn through so many homes and institutions it becomes dehumanizing, ultimately searing away all remnants of his innocence.

Eventually he is moved to a school run by Catholic Brothers, and he begins to blossom as a young, intelligent soul who has had some hard breaks and yet, naturally, he is targeted for more abuse—again and again. It is here that he grows large enough physically and tortured enough mentally to become warped into a predator.

The Kid is another brave novel just as Push was. But what happens here in this novel when the topic is male violence and male abuse and the abused turns into abuser, is beyond pushing the envelope: It is alienating and much too challenging—or perhaps it’s just me. Regardless, this character is one of the most tragic and complex characters I have ever encountered.

While Precious had much drawn into her character that was redeeming, allowing her to seem to triumph—at least spiritually—over her circumstances, especially by dint of her writing, Precious’ son is unable to use his creative side to move past that which has been done to him. He starts out such a bright young student, full of potential, but that too just makes him a target—prey.

Fifteen years after the publication of Push, after the Academy Award-winning film adaptation, Sapphire breathes the son to life. This is a sequel that is graphic and brave. It is compelling even as you want to throw it down in disgust. Sapphire’s style is still brilliant and gritty and urban, borrowing heavily on Virginia Woolf’s stream of consciousness technique. At times, when Abdul is claimed by a distant grandmother of sorts, it is difficult to tell where dream and reality begin and end.

The Kid is not a novel I would recommend to many outside the field of child welfare. It is the most brutal coming of age story imaginable.