A Key to Treehouse Living 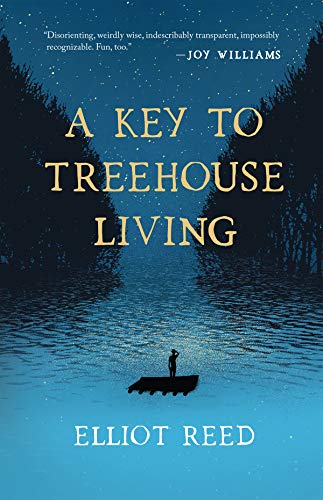 One who examines his tattered life by bringing together seemingly disparate elements from his past, both real and imagined. See REALITY.

Reality is often painful. Better at times to retreat to a raft . . . or a treehouse. Huck Finn would understand.

No, these are not excerpts from Elliot Reed’s debut novel, A Key to Treehouse Living, but they very well could be. The book, not quite a dictionary, is a compendium of observations by reluctant narrator, William Tyce, that takes readers alphabetically from ABSENCE to YONDER, THE WILD BLUE.

After reading the first few entries, you might turn to the cover to confirm that you are in fact reading a novel. It feels at first as if you’ve found yourself in the middle of Ambrose Bierce’s Devil’s Dictionary. Or that you’re reading a series of footnotes by David Foster Wallace, strung together to form a narrative.

You’re compelled to ask, Where’s the story? But the voice is whimsical and engaging, so you plod ahead and soon catch on: the narrator, a young boy, orphaned, a novice to the world, is awash with wonder. The first entry begins, “A woman becomes a mother when a baby comes out of her body.” The short entry ends with this chilling line: “Not all mothers want to be with their children.”

Instead of exploring the pain of such abandonment, the narrator immediately turns to the workings of ALPHABETICAL ORDER and how this system doesn’t always make sense. Once you realize that such digressions serve as buffer to his pain, the novel becomes much less mystifying and more satisfying. Rather than trying to tease out the narrative, best to just enjoy the ride.

And what a ride it is. A treatise on philosophy, nihilism, science, nature, physics, kinetics, shamans, ghosts, gambling, photography, and yes, sex. Under MATING: “Nobody knows why animals mate in such dark and secret places, but it’s probably born from a desire to be alone. Dogs, however, are an exception, and they love to mate in public.”

These light entries are often followed by deeper musings, which arise from the most mundane of observations. The narrator describes a nihilist named Butch: “the only time he cared about anything was when Elmer Fudd came on TV,” which ultimately—and satisfyingly—evolves into a captivating discussion on morality. If you “see the universe as a chaotic soup…that no matter how you act . . . you have no control,” then you will, for example, steal.

Ultimately, the book is about the journey of a vulnerable young man, searching for home, for family, for connection. A young man who has to rely almost entirely on his own perceptions and convictions. A young man open to possibilities, who will open your own world.