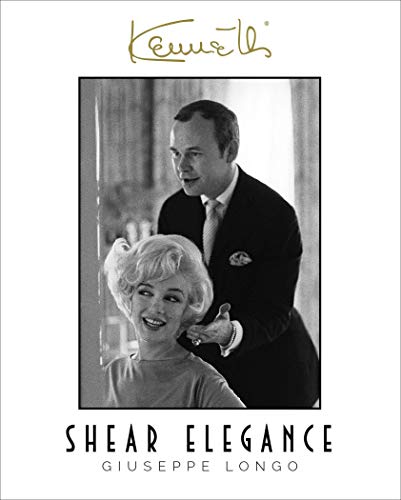 This is one of those books that requires a thirst for the past glories of what life was once all about for a small-town boy who “made good” in New York City. If you are not familiar with the name KENNETH or Kenneth Battelle, then get that Google googling because you’re in for a treat—especially if you are not cognizant of the glamour and styles of the glory days of NYC in the ’60s and ’70s.

KENNETH, as his salon was known, was a phenomenon or a symbol of having “arrived” within a small cult of women who came from the world of blue bloods, politics, high society, celebrity, royalty, fashion, media—the elite strata who relished in saying they had their “hair done” by Kenneth.

Suga, Ara Gallant, Rick Gillette, Carita, Harry King, Christiaan, Vidal Sassoon, Alexandre, and Michel Kazan came from this status driven group of hair designers, rather than hairdressers, since they were all geniuses in their own way. But there was only one Kenneth Battelle.

Reputations were built on integrity and skillset of their work and in most cases were due to humility, generosity, wit, a tight lip, and their work ethic. These artists were what dreams were made of. Kenneth was responsible for so many looks that withstood the test of time and are styles that elevated the profession from just hairdressing to trendsetting.

Kenneth: Shear Elegance is the biography of the trajectory of a man whose singlemindedness, creativity, loyalty, and innovations catapulted him to the top of the list when it came to hair. His brownstone on East 54 street was like a sorority house or private girls club of what it was like to be a pampered woman a la George Cukor’s The Women. It was a universe unto itself as well as possibly thought of as a rite of passage for women of a certain station. It wasn’t just a salon, it was the world of Kenneth Battelle, and it was a world that included Babe Paley, Marilyn Monroe, Jackie Kennedy, Joan Rivers, Farah Diba Pahlavi, Lauren Bacall, Marella Agnelli, and Gloria Vanderbilt.

In these days of media and attention whores, Kenneth: Shear Elegance can serve as a primer that one’s skills can speak for themselves and that cream always rises to the top. The biography is just a reminder of how glamorous and refined life once was when there were women of great taste and culture inhabiting a social circle that didn’t rely on the size of one’s breasts or how much Botox has been injected into their faces. They were the ladies who lunch who knew that looking perfect from head to toe was a full-time job and that Kenneth was the man who started at the top.