The Kennedy Withdrawal: Camelot and the American Commitment to Vietnam 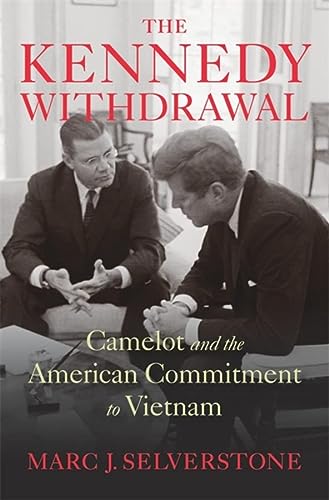 “Silverstone’s The Kennedy Withdrawal . . . does give us greater insight into the motives of Kennedy and his advisers in their efforts to ‘succeed’ in Vietnam.”

Ever since the political left in this country turned against the Vietnam War, partisan and scholarly debates have raged about whether President John F. Kennedy, assuming he had not been assassinated and won a second term, would have escalated U.S. military involvement in Vietnam like his successor Lyndon Johnson did. Marc J. Silverstone of the University of Virginia’s Miller Center begins his new book on this subject by calling this debate “The great ‘What If?’”

Unfortunately, Silverstone’s The Kennedy Withdrawal does not definitively answer that question, but it does give us greater insight into the motives of Kennedy and his advisers in their efforts to “succeed” in Vietnam. And success was defined as preventing South Vietnam and the other Southeast Asian “dominoes” from falling into the hands of the communists.

Silverstone depicts Kennedy and his national security team as believers in the “domino theory” that was first explicated by President Eisenhower in the 1950s. This theory held that if South Vietnam fell to the communists, other nations in the region would also fall like dominoes—one after the other. And in the “long twilight struggle” (Kennedy’s words) known as the Cold War, the fall of those Asian dominoes would undermine American credibility throughout the world.

Silverstone challenges what he calls the “Camelot” view of the Kennedy withdrawal—the notion promoted by Kennedy court historians and partisans that Kennedy was determined to withdraw U.S. forces from Vietnam, thus avoiding the quagmire that President Johnson supposedly created in the wake of Kennedy’s assassination. Very little in history or politics, and very little about the machinations of the Kennedys, is that simple.

As a Senator from Massachusetts, Kennedy, Silverstone notes, took public positions that “were sharply critical of the Truman administration--for its handling of the Chinese civil war . . . and for its handling of the Korean War.” Senator Kennedy was a foreign policy “hawk” who criticized Eisenhower for not spending enough on conventional defenses and for negligently allowing a “missile gap” to develop in favor of the Soviet Union. Kennedy ran to the “right” of Vice President Richard Nixon on foreign policy issues during the 1960 presidential campaign.

As President, Kennedy in his inaugural address promised to “bear any burden” and “pay any price” to defend liberty, and he significantly increased the numbers of U.S. military forces in South Vietnam. Kennedy and some of his advisers characterized the defense of South Vietnam as a “vital” or “significant” U.S. interest. Silverstone identifies the considerations that shaped JFK’s approach to Vietnam as “modernization, foreign aid, counterinsurgency, . . . flexible response . . . [and] general concerns about credibility and falling dominoes.”

Domestic politics was never too far away from Kennedy’s consideration on Vietnam or, for that matter, any other issue. And it was here that Kennedy and his advisers formulated plans for a symbolic withdrawal of 1000 troops for sometime in 1964 or 1965. But Kennedy did not want to be the president who “lost” Vietnam the way Truman “lost” China. Truman suffered politically both for the “loss” of China and the stalemate of the Korean War.

Silverstone notes that the key national security document on U.S. policy toward Vietnam produced by Kennedy’s task force on Southeast Asia was NSAM 52, which “pledged the administration ‘to prevent Communist domination of South Vietnam; to create in that country a viable and increasingly democratic society; and to initiate, on an accelerated basis, a series of mutually supporting actions of a military, political, economic, psychological and covert character designed to achieve this objective.’” Pursuant to this plan, the Kennedy administration sent U.S. servicemen “streaming into South Vietnam.”

Silverstone criticizes the Kennedy team for their “reluctance to distinguish between peripheral and vital interests” and for developing a habit of using U.S. military forces to “send signals” of American resolve. Kennedy’s military “advisers,” Silverstone notes, were engaging in combat, regularly accompanying South Vietnamese forces into the field against the Viet Cong.

Kennedy consistently portrayed his administration’s actions as helping South Vietnam “win its own fight.” Kennedy understood the political danger of over-committing American forces in a country most Americans knew little about. But he also understood the political minefields of the “falling dominoes” and another Korean War-like stalemate. Kennedy was nothing if not politically cautious.

Silverstone provides plenty of evidence for a token Kennedy withdrawal of forces, but very little evidence—other than self-serving recollections of Kenneth O’Donnell, Arthur Schlesinger, Jr., and the egregious Robert McNamara--that Kennedy intended to withdraw U.S. military forces from Vietnam. The “Camelot” version of the Kennedy presidency is as fictitious as the English legend.

The best Silverstone can do is to speculate about JFK’s real intentions in Vietnam. And he suggests that Kennedy and his national security team would probably have acted on the basis of the military situation on the ground as it evolved over the next several years. And it is worth remembering that most of the people advising Lyndon Johnson on Vietnam after Kennedy’s death were Kennedy’s people.

“Rather than signal an eagerness to wind down the U.S. assistance effort,” Silverstone concludes, “the policy of withdrawal—the Kennedy withdrawal—allowed JFK to preserve the American commitment to Vietnam.” The rest, as they say, is history.