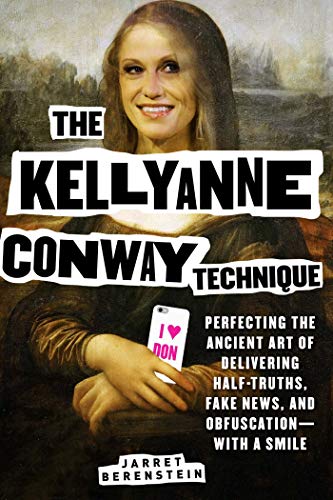 “one can only hope that many more writers will tackle the methodology of untruth—well beyond Conway’s technique—during this bizarre and perilous political era.”

The Kellyanne Conway Technique is a very funny book on a gravely serious topic. In a wider perspective, it’s about the erosion of truth in our political discourse. It’s about how easily dishonest people can trick the media into allowing the spread of lies for political purposes.

But the book focuses on a narrower perspective, uncovering how one political operative, Kellyanne Conway, practices the art of dishonest spin in service to her boss, Donald Trump.

A quick question to start: Why does Berenstein single out one of the few women associated with Donald Trump? There are so many ripe male targets—Trump himself, Pence, Kushner, Flynn, Manafort . . . it goes on. Only Berenstein can answer that, and it even seems at times that he has a bit of a crush on Conway. But, whatever her gender, Conway surely deserves having her extreme use of political spin analyzed for “accuracy” and tactics of deception.

The Kellyanne Conway Technique is certainly not for everyone. It’s not for Trump supporters, surely, or for anyone else who might want to give credence to anything uttered by Conway. But is it for all anti-Trumpers? Some of them might say they can’t stand being exposed to Conway any longer, even in a parody. Others might insist that the current politics of dishonesty comprise a weighty topic, so they don’t feel there’s anything funny about Conway’s deceptions and evasions.

These skeptics should reconsider and give the book a chance. It’s funny in the rapid-fire style of a stand-up comic. Just about every paragraph contains joke material. Some of it laugh-inducing, some worth a chuckle or smile, and a small amount, inevitably, that falls flat.

Also, it’s a fast and easy read that can be knocked off in one or two sittings. It might even be a catharsis for some readers, as Berenstein deftly expresses some of the things readers might have been yelling at the television during Conway’s interviews.

More importantly, though, amid the humor—readers might not take a comic seriously if he weren’t joking—Berenstein provides the beginnings of truly good analysis. He takes an insightful look at Conway’s methods of evading the truth and flummoxing supposedly skilled interviewers into letting her get away with it—and letting blatant deception float out there in the vapor for all to consider. “Hmmm, if Bill Maher/Chris Matthews didn’t bust her on that, maybe there’s some truth to it.”

Every writer, even a humor writer, needs a structure for his or her book. In The Kellyanne Conway Technique, Berenstein has chosen to claim—with irony—that this is a book for people who want to learn to lie better. (It isn’t.)

In each Chapter he explains another Kellyanne technique of lying, obfuscating, or confusing interviewers and the general public. Then he ends the chapter explaining, again with irony, how the reader can use the same technique in many everyday situations, such as getting out of a traffic ticket or getting away with marital infidelity.

The structure helps the book flow, but it doesn’t always work. It seems to get less funny and less believable as the book progresses, making the reader want to skim or skip those parts. And since he sometimes rails angrily against Conway’s deceptions, Berenstein himself often violates the logic of that structure anyway. (But, of course, rules of logic don’t always apply to comedy.)

About the book’s Conclusion: Sometimes a writer gets near the end of a book and feels extreme burnout. “I can’t think another thought about this topic.” That may be what happened to Berenstein here. The Conclusion is weak and even ends with a comic’s last resort—unnecessary obscenity. It continues the by-now tiresome sidebar of irony that the reader wants to use the Conway Technique in everyday life. That’s too bad, because, in spite of the requisite of being funny, Berenstein has provided some important analysis of political spin—spin that goes beyond Orwellian.

A more satisfying conclusion, while remaining funny, might have summarized and clarified Conway’s deceit, maybe even synthesizing some lessons to be learned. But that’s a task Berenstein leaves to the reader.

After reading The Kellyanne Conway Technique, one can only hope that many more writers will tackle the methodology of untruth—well beyond Conway’s technique—during this bizarre and perilous political era.