The Keeper of Lost Things: A Novel 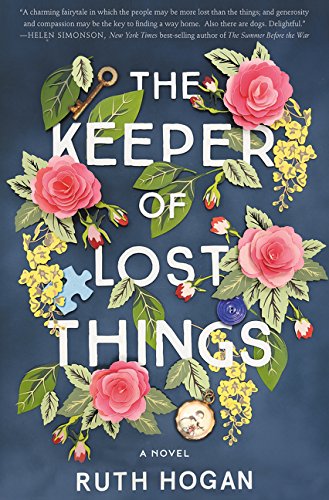 “a feel-good debut novel that’s hard to walk away from.”

This book might hold the record for number of storylines contained in one novel—wheels within wheels within wheels. It starts to feel a little trippy after a while, especially when the ghost steps in, and a girl with Down syndrome named Sunshine shows extrasensory perception.

It starts with the original keeper—Anthony Peardew—a broken-hearted soul who tries to atone for losing an object. Its preservation was the only promise he failed to keep to his beloved, Therese, and he believed that his failure caused her to die just before their wedding. Consumed by grief, he devoted the rest of his life to reuniting lost things with their owners, because you can never know how important a seemingly useless item can be to someone else.

Knowing he would fail to achieve those reunions before he died, he prepared for someone to follow: Laura, another heartbroken soul, who begins as his assistant then carries on after Anthony passes. She finds her way back to life through service to his mission and unknowingly paves the way for the next keeper.

Each of their stories comes across in cycling chapters, which are interspersed with the story of Eunice and Bomber, an unlikely pair in the publishing biz who seem to have nothing to do with Anthony and Laura. Yet they prove to be key players in the lost things finding their ways back home.

Anthony, earlier in his life, was a noted short story writer. His imagined tales of the lost objects’ histories are also woven through the narrative, slowly but surely linking the things and the people together.

The novel’s trigger event is Anthony finding a box of human cremation ashes abandoned on a seat in a train. This scene is an eyebrow-raising, attention-getting opening paragraph that serves as a mini-prologue impelling readers into the story.

The author pulls us along not only with the uniqueness of the characters’ circumstance, but also with delightfully fresh phrasing, such as:

a train that “juddered to a halt”

“the tinnitus of technology”

“sky the color of blue curaçao”

“the sad salmgundie of [stuff]”

“an inelegant zigzag of nose, elbows, and knees”

“an old-woman-shaped vessel of vitriol”

someone having the “constitution of a concrete cockroach”

another who feels “etoliated rather than invigorated by his walk”

one with “tanzanite eyes”

The story is interesting and complex enough to carry itself in a realistic setting (contemporary England). However, it enters the realm of fairy tale by involving the supernatural. Sunshine’s convenient ESP works with Therese’s ghost to drive the earthbound characters to fulfill Anthony’s mission down to the last object, as well as to resolve their own affairs.

That none of the myriad stories are allowed to remain unclosed creates the wheels-upon-wheels effect of the narrative. The turnings create a gentle tale about kindness and redemption, wherein lost souls and lost objects get rejoined in unusual ways to restore people’s happiness and even lay ghosts to rest in a feel-good debut novel that’s hard to walk away from.