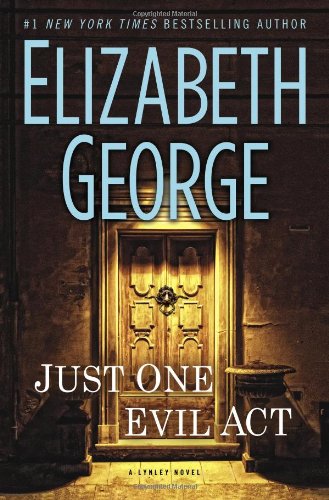 “More is not less here; more is just more.”

There is a long tradition of great sidekicks in detective fiction: Watson and Holmes, Hastings and Poirot, Hawk and Spenser. The role can range from comic relief to a dark reflection to an alter ego of the hero. Sidekicks are often the only true friend of the main character and act as an interpreter for the reader, explaining what the Great One is thinking.

Elizabeth George broke the mold with Detective Sargent Barbara Havers in the Inspector Lynley mysteries. Havers is the opposite of Lynley in every way: personality, gender, and class. Thomas “Tommy” Lynley—aka the Eighth Earl of Asherton—could leave Scotland Yard at any moment to take up to his earl duties.

Working class Havers has doggedly pursued policing and has risen through overwhelming sexist male ranks. Both are outsiders in Scotland Yard and are therefore looked upon with suspicion. The connection between the duo is as important as the plots themselves. Both are straight, and refreshingly, there is no chance of a sexual relationship between them.

Look for what inappropriate T-shirt Havers will wear—there’s an especially good one involving Keith Richards in this outing.

Havers gets the spotlight in this book, a development for which fans have been clamoring.

But be careful what you wish for. Just One Evil Act starts with the disappearance of nine-year-old Hadiyyah, the daughter of her friend and neighbor Taymullah Azhar, both of whom Havers loves, even if she can’t admit it. The child has been taken away by her mother Angelina.

It’s not kidnapping for Azhar never divorced his first wife to marry Angelina, and his name isn’t on the birth certificate, so he has no legal claim. The private detective Havers and Azhar hire offers little hope.

Months go by and it Azhar seems to be beginning to accept the loss, when Angelina shows back up in London with news Hadiyyah is missing, kidnapped from her new home in Tuscany.

Is the Evil Act of the title the “kidnapping”? Or is the evil act Azhar sleeping with Angelina and completely discarding his first family? Perhaps it’s Angelina’s family who despise Azhar and Hadiyyah because they are Pakistani.

And that’s just on the England side of the channel. The Italian contingent is not untainted by evil even the wannabe nun flagellates.

Clearly Elizabeth George was inspired by the real life Amanda Knox case, where the American college student and her former Italian boyfriend were found guilty of murdering her housemate in picturesque Perugia, until an appeals court overturned the decision.

Unfortunately in these 796 pages Elizabeth George throws the proverbial kitchen sink at the reader. The book reads like every detail she researched is put in from how the Italian prosecution is involved very early on with the police, how corrupt Italian police taint cases, how beautiful the walled city of Lucca is in the sunny Italian spring . . .

There are way too many pages here full of too many characters, too much travelogue, too many of Havers’ crazy schemes merely plotted to get her thrown off the police force.

In the second half of the book Lynley is a wasted character, rushing around trying to balance a new romance and saving Havers from herself.

Elizabeth George is too talented a writer to distrust her readers. Her plot tries the reader’s patience, evidenced by the placement of the death well into the book, by which that time it seems superfluous.

More is not less here; more is just more.

As Havers herself would point out: Got it! Move on.