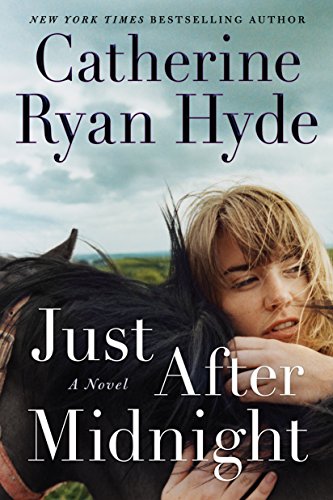 “Hyde is a master at mining the emotional depths of her characters and bringing them out the other side.”

Catherine Ryan Hyde is the author of more than 30 books. She burst on the scene as a New York Times bestselling author of Pay It Forward, which was later adapted into a major motion picture. Her latest book, Just After Midnight, is another great addition to her collection of wonderful, emotionally charged novels.

Faith, Sarah, and Constance find themselves in a tenuous relationship of survival, friendship, and keeping hope alive for each other. Faith has just left a marriage that she describes as verbally and emotionally abusive, but at least he was never physically violent. Still, she runs and goes into hiding at her father's beach house just in case. Constance is Sarah's grandmother. Sarah's mother has just died and keeps hinting that her father might have had something to do with it. Constance does blame her father and takes Sarah in to stay at her beach house. After the father tries to trick Faith in order to get to Sarah the three women hatch a plan that will quiet possibly save them all.

Catherine Ryan Hyde is an avid hiker, traveler, equestrian, and amateur photographer and it shows in this book. Her extensive knowledge of the equestrian arts shines through. The center of Sarah's world is a mare called Falkner's Midnight Sun. Her father sold it after her mother's untimely death. Sarah convinces Faith there would be no better place to hide them with the mare. Sarah needs the horse to restore her hope. Faith needs time on her own to regain her sense of self after her marriage. Constance needs to see her granddaughter's world restored to some semblance of normalcy. Hyde guides all three of these characters to this end while also keeping the suspense of an unsolved mystery.

The author has weaved a brilliant tale where each woman has a wonderful arc to travel from personal tragedy to finding their balance again. The relationship between the three is ad hoc and unplanned and yet it still rings true as realistic and authentic. Hyde is a master at mining the emotional depths of her characters and bringing them out the other side.