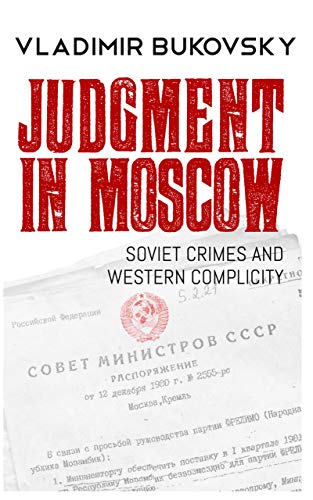 “This book will be a hard pill to swallow for many in the United States and the West. It raises uncomfortable moral dilemmas and exposes Western weaknesses. . . .”

The principal contention of Valdimir Bukovsky’s Judgment in Moscow is that the West’s victory in the Cold War was incomplete and temporary because the communist ruling class or nomenklatura clung to power in Russia even after the Soviet empire collapsed.

This happened, he argues, because the victorious Western powers failed to insist on a Nuremberg-style reckoning that would have held the perpetrators of Soviet crimes accountable for their misdeeds. Indeed, the book’s title is taken from the film Judgment in Nuremberg.

There were no such trials in Moscow. As a result, Russia is currently ruled by a former KGB officer who has imposed “neo-bolshevism” on the country. It brings to mind what Winston Churchill wrote about an earlier lost peace: “The crimes of the vanquished find [in] their background and their explanation, though not, of course, their pardon, in the follies of the victors.”

Bukovsky’s book is about not only the follies, but also the complicity, of some of the victors in what he calls “the failure to finish off the Soviet system conclusively.” The follies were committed by Western statesmen—even anti-communist statesmen (Reagan, Thatcher)—who misunderstood the purpose of Soviet leader Gorbachev’s glasnost and perestroika. The accomplices were Western socialists who shared communism’s ideological vision even as they recoiled from communist methods to bring about Utopia.

The author, a prominent Soviet dissident who suffered imprisonment in labor camps and “psychiatric hospitals” for his outspoken opposition to the Soviet regime, wrote this book in 1995–96 after gaining access to Kremlin archives for a brief time period in the early 1990s. Although published in Russia, France, Poland, Germany, Italy, and Romania in the mid-to-late 1990s, it has taken more than 20 years for an English version to appear.

Bukovsky is unsparing in his criticism of what he calls “the treacherous role of the American left” in the Soviet Union’s survival in the 1970s and 1980s and Russia’s reversion to autocratic rule in the post-Cold War world.

He traces the left’s complicity with Moscow to the 1930s and 1940s when pro-Soviet progressives infiltrated U.S. government agencies and even committed espionage on behalf of Stalin’s regime. In the 1960s, some on the American left veered toward anti-Americanism in their opposition to the Vietnam War. This complicity, he believes, manifested itself again in the left’s commitment to détente, which the author claims “prolonged the life of communist regimes . . . for at least ten years.”

In Germany, the central front in the Cold War, détente was called Ostpolitik and led by German socialist Willy Brandt. While for American political leaders such as Richard Nixon and Henry Kissinger détente was about “easing tensions” and “peaceful coexistence,” for European socialists detente was about hoping that the Soviet regime would practice “socialism with a human face.” Bukovsky writes that the Western socialist hope was always a chimera rooted in an intellectual failure to understand the evil of communism.

He compares Western socialists to Russian Mensheviks whose “eternal dream” was to “return the Bolsheviks to the bosom of social democracy, the wish of an idiot for a hybrid of kindergarten and a labor camp.” Kremlin archives show again and again how easy it was for the Soviets to manipulate what he calls the “leftist intelligentsia” both in Russia and abroad.

Bukovsky recounts détente’s dismal record: the communization of South Vietnam; genocide in Cambodia; Soviet-supported governments in Angola, Ethiopia, South Yemen, Somalia, Mozambique, Nicaragua, Grenada; Soviet attainment of strategic nuclear superiority; the widespread notion among Western elites that there was “moral equivalence” between the United States and the Soviet Union; and “the loss of the will to resist [Soviet encroachments] that afflicted the West.”

The Kremlin archives reveal Soviet manipulation of Western “peace movements” and Western media to spread Soviet propaganda. Soviet delegations in the West were instructed to “further contacts with liberal and opposition circles that are promoting normalization of relations on the basis of the USA’s rejection of the policies of the ‘cold war’ and the arms race.”

The USSR’s Academy of Sciences reached out to influential Western scientists who shared the Soviet’s desire for “peace.” “The Soviet ‘struggle for peace’ campaign that swept across Europe at the beginning of the 1980s,” Bukovsky writes, “would not have had even half of its success if it were not for the participation of social democrats, socialists and their subservient trade unions, and youth, women’s and similar organizations that chose to cooperate with communist parties . . .”

Bukovsky and other Soviet dissidents understood that “the ‘struggle for peace’ formed an integral part of the Soviet ideological battle with the outside world.” “Peace” was only possible, in Soviet terms, when socialism achieved victory throughout the world.

There were some in the United States who fought against détente—Sen. Henry Jackson, AFL-CIO President George Meany, future President Ronald Reagan, and others. These leaders understood that there were no “doves” in the Kremlin and that the Cold War would not end until the Soviet empire collapsed.

Such leaders gained power in the West in the 1980s. Bukovsky credits President Reagan and British Prime Minister Margaret Thatcher for making “the dismantling of socialism the foundation of their [policies].” Reagan in particular understood that the West could bankrupt the Soviet Union and he implemented policies designed to do just that. And those policies worked.

Bukovsky rightly points to the manipulation of the oil market by U.S-Saudi agreement as the most important aspect of this economic warfare. In 1985–86, alone, the Soviets’ hard currency income decline by a third. This coincided with the massive Reagan military buildup, which placed further strain on the Soviet economy.

Gorbachev’s glasnost and perestroika were reactions to this economic and political dilemma. Bukovsky compares Gorbachev’s program to Lenin’s New Economic Policy (NEP) that was designed to rescue the socialist system after the ravages of revolution and civil war in Russia.  Bukovsky ridicules the widely accepted notion that Gorbachev intended to fundamentally reform the Soviet system.

This “Gorbachev myth,” according to Bukovsky, led to the West letting down its guard and attempting to rescue the Soviet empire as it was collapsing. “There is no other explanation,” he writes, “of the absurdity of the next five years, when communism was suffering obvious agonies while the whole world tried to prolong its existence.”

Bukovsky believes based on certain Kremlin archives that the “Velvet Revolution” of 1989 in Eastern and Central Europe was a Soviet operation designed to bring “reformers” like Gorbachev to power in the satellite states who would save socialism in those countries. Soviet leaders hoped that this revolution from above would persuade American and European leaders that American arms could safely be withdrawn from Europe.

Instead, what happened in the satellite states was a “revolution from below” that the communists could not contain. It happened, he writes, “not because of, but despite Gorbachev and his accessories.”

Gorbachev the “reformer,” the “liberal,” the “democrat” was a myth, he writes, invented by Soviet disinformation and accepted by Western elites, even Reagan and Thatcher. Because this myth took hold in the West (and survives to this day), Bukovsky laments, “the world sank into ‘post-totalitarian’ absurdity instead of recovery from the communist plague.”

Russia’s moment of freedom, Bukovsky writes, “was not a revolution.” “The new political elite that . . . floated to the surface turned out to be the old nomenklatura which had time to adopt itself to new conditions.” The “new” elite, he continues, “did not want any radical changes, nor did it need old ideology, because it held on to the ‘commercial structures, and property, and fictional parties, and the mass media as well as former ties with ‘old friends.’”

This all could have been avoided, Bukovsky believes, if the victorious Western powers convened a Nuremberg-type trial to make those who were responsible for Soviet crimes face justice as some Nazis did after World War II.

One wonders how that would have been accomplished. Unlike Nazi Germany, the Soviet Union was not defeated in battle, its cities were not turned into rubble, and its territory was not occupied by four other great powers. Moreover, the Nuremberg trials were morally compromised from the outset by having Stalin’s judges sitting in judgment of others. Finally, the demands of realpolitik ensured that not all Nazi criminals faced justice.

Western statesmen in the aftermath of the Soviet collapse had greater responsibilities than simply bringing Soviet criminals to justice, even if they had the ability to do so. Stability and the balance of power often trump morality in the conduct of foreign policy.

It is understandable and laudable that Bukovsky, who suffered personally and observed his fellow citizens suffer under the Soviet criminal regime, seeks justice and a government that respects human rights and the dignity of the individual. Western statesmen don’t have that luxury. Their first priority is and should be the welfare, security, and peace of their own citizens.

This book will be a hard pill to swallow for many in the United States and the West. It raises uncomfortable moral dilemmas and exposes Western weaknesses. In one section of the book, Bukovsky criticizes Americans for their lack of culture, their feverish conformity, and their pursuit of material success at any price. American intellectuals, he writes, suffer from “overweening narcissism, belief in their ‘enlightening’ mission, and the right to a privileged, elite position.”

For others, this book may shed some light on the nature of the current Russian regime and why, after our apparent victory in the Cold War, we face a Russia seeking once again to expand its influence in Eastern and Central Europe and which denies freedom and liberty to its people.