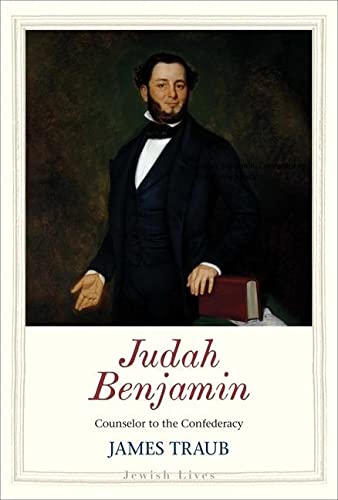 For a century and a half, Confederate statesman and former US Senator Judah P. Benjamin was a source of pride to parochial Southern Jews who longed for regional legitimacy and validation.

Benjamin was once known as “the brains of the Confederacy,” and, retrospectively, as “the Confederacy’s Kissinger.” He served his friend and fellow US Senator Jefferson Davis as the South’s attorney general, secretary of state and secretary of war. His face was on the rebel regime’s two-dollar bill.

Benjamin “was the most politically powerful, and arguably the most important, American Jew of the 19th century,” writes James Traub in Judah Benjamin: Counselor to the Confederacy, the latest concise biography in Yale University Press’s Jewish Lives series.

While he never hid his religious identity, Benjamin was not a particularly good Jew. He was not observant, and he married outside the faith, yet he never took the final step of Southern assimilation by converting to Christianity.

In essence, Traub says, Benjamin seemed to be saying, throughout his life, “I am a Southerner, not a Jew.”

In his 1980 book, A Class by Themselves: The Untold Story of the Great Southern Families, William Stadiem described Benjamin as “arguably the greatest of all Southerners.”

Yet despite his faithful service to the Confederacy, and as much as because of his faith, Traub writes, Benjamin was “the most widely hated [Jew], not only in the North but in portions of the South.”

Although largely forgotten today, Benjamin was and is embedded in American popular culture. He pops up in Stephen Vincent Benet’s poem, “John Brown’s Body,” as well as in contemporary novels, like Dara Horn’s All Other Nights, and Philip Roth’s The Plot Against America.

Over the years, Benjamin has been the subject of more than half a dozen sympathetic biographies, including Eli Evans’ exhaustive Judah P. Benjamin: The Jewish Confederate, on which Traub heavily relies.

Recently Benjamin’s reputation has been in serious decline, largely because of his resolute defense of slavery, and his decision to choose flight and permanent exile from the United States after the Civil War.

Traub, who teaches foreign policy and intellectual history at New York University, and is a columnist for Foreign Policy, reinforces this justifiably revisionist perception. A more accurate subtitle for Benjamin’s biography might be “Unregenerate Confederate.”

Traub is unambiguous in his verdict on Benjamin, who owned 140 slaves on his Louisiana sugar cane plantation, which made him “the largest Jewish slave owner in the United States by an order of magnitude. Benjamin was a man of the South; as slavery was the South’s cause, so too did it become his.”

This, the author writes, defined him.

“We, who recognize in slavery America’s original sin and the source of cruelty and suffering continuing to this day, are inclined to regard the alleged virtues of a man like Benjamin as the mere instruments of a malevolent cause. Charm, brilliance, tact—how can they weigh in the scale against a life made possible by slavery and devoted to the defense of slavery?”

What has made it difficult for biographers, including Traub, to paint a full portrait is that Benjamin was intentionally opaque about his personal life. He left neither diaries nor personal letters and declined to cooperate with a would-be biographer while he was alive.

So profilers have had to rely on the historians’ traditional tools in such circumstances: the public record, contemporaneous newspaper accounts, surviving letters to others, and second-hand recollections. Like them, Traub has necessarily had to rely to some degree on his own informed speculation.

Thus, with a good deal of historical context, this is as much a diplomatic history as a personal one, and as a result Benjamin is sometimes absent for pages. There is also some padding, including more about sugar cane cultivation and processing than most general readers might want to know.

Judah Philip Benjamin was born in 1811 on the Danish Caribbean island of St. Croix, while it was occupied by the British in the Napoleonic Wars. His parents, Sephardic Jews from London, moved the family to North Carolina in 1813, and then to Charleston, SC.

Benjamin’s inclusion in Yale’s Jewish Lives series, which includes Moses and Maimonides, as well as Karl and Groucho Marx, is tinged with irony: Benjamin was admitted to Yale at age 14, but was expelled in 1827 for unspecified “ungentlemanly conduct.” In the wake of the scandal, Benjamin headed to New Orleans to make a fresh start.

A brilliant and likable lawyer and orator, the diminutive Benjamin soon distinguished himself in court and in politics, serving in the Louisiana state legislature. His legal prominence led fellow Whig, President Millard Fillmore, to offer him a seat on the US Supreme Court, which he turned down.

Instead, in 1852, he was elected to the US Senate, one of the first Jews to serve in Congress.

In the Senate, Benjamin’s spirited defense of slavery prompted one of his Abolitionist colleagues, referring to the Exodus, to describe him as “an Israelite with Egyptian principles.”

But when his state seceded and joined the Confederacy, Benjamin left the US Senate. With him went another Caribbean-born, plantation-owning, slavery-supporting Southern Jew, David Levy Yulee, who then represented Florida in the chamber.

Following his devoted and tireless service to the Confederacy, and with the impending collapse of the rebel regime, Benjamin fled South to Florida and then to England, where he had a distinguished legal career.

What accounted for Benjamin’s allegiance to slavery?

One curious episode from Benjamin’s legal career, recounted in Traub’s Introduction, addresses that issue but raises more questions than it answers.

In 1842, Benjamin represented an insurance company that refused to pay a claim of a shipping company over the loss of a cargo slaves. The Africans took over their ship and fled to the British West Indies, where slavery and the slave trade were outlawed.

The previous year, in a similar, successful, case before the US Supreme Court, John Quincy Adams used the argument that the slaves who took over the ship Amistad and fled to a free state could not be returned to slavery.

In Benjamin’s case, before the Louisiana Supreme Court, the lawyer echoed Adams’ argument.

But in his brief, Benjamin also limned Shylock’s poignant speech from Shakespeare’s play, The Merchant of Venice.

“What is a slave?” Benjamin asked the court in his written appeal. “He is a human being. He has feelings and passion and intellect. His heart, like the heart of the white man, swells with love, burns with jealousy, aches with sorrow, pines under restraint and discomfort, boils with revenge and ever cherishes the desire for liberty.”

Slavery, Benjamin concluded, “is against the law of nature.”

Benjamin won his case, yet Traub notes that at the time Benjamin made his argument he was a sugar cane plantation owner with 140 slaves. Was his argument before the Louisiana court entirely cynical? Or did he believe it, and not notice the irony? Did he believe what he said about slavery?

“People commit themselves to causes that we rightly regard as terrible,” Traub writes, “for the most human of reasons—because they are blinded by vanity or ambition, or fired by religious conviction, or propelled by nothing more extraordinary that self-interest.”

Did he pay for this choice? Not really.

“In a universe ordered by our moral imagination, Judah Benjamin’s life would have ended with a terrible reckoning. But the universe is not a movie.”

“Wreathed with success,” as Traub puts it, he died in 1884 at his wife’s home in Paris. He was buried, in a Catholic service, at his wife’s insistence, at the famed Pere Lachaise cemetery there, where Oscar Wilde and Jim Morrison now rest.

There was some minor and belated ignominy. By 2010, Benjamin’s New Orleans home had become a strip club.

In 2020, amid the Black Lives Matter movement, a black granite monument, marking Benjamin’s stay with a prominent Charlotte, N.C., Jewish family while in flight from Richmond and Union pursuers, erected by the United Daughters of the Confederacy in 1948, was removed.

That same year, another monument and nearby historical marker in Sarasota, FL., noting the spot where Benjamin then fled to the British island of Bimini in 1865 were also removed.

Until his death, Judah Benjamin, who “served as an indispensible cog in an evil machine,” in Traub’s words, remained an inveterate racist and white supremacist.

“Benjamin does not deserve our admiration,” Traub concludes, “but like some other figures who have yoked their lives to deplorable causes, he nevertheless deserves our attention.”