The Journeys of Trees: A Story about Forests, People, and the Future 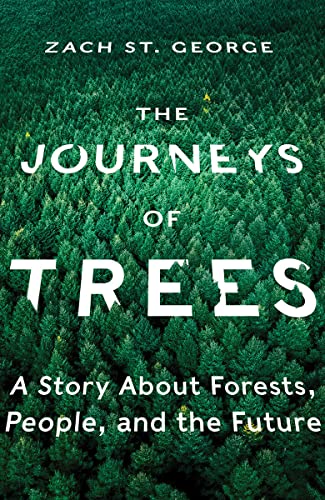 Reading The Journeys of Trees offers a weathered optimism as once mighty Western and Pacific Northwestern forests go up in flames sparked by climate change and mismanagement.

“A tree defines its place, so when the tree dies it can seem like the place is ruined too,” writes author Zach St. George. Trees may be rooted when disaster strikes, but forests can be mobile, and their cause for migration is simple: “The climate changes, and forests follow.”

If they can. And once, a long time ago, forests did journey seed by seed and sprout by sprout across vast, open landscapes to new habitats.

“For a long time, people had mostly assumed that if a plant existed in a place, then that place was where it was supposed to be,” at least in terms of the old conservation models that rested on assumptions of stability in the natural world and veneration of the wild. But what if change comes hard and fast, and the wild is nothing more than an accident, or worse, bad luck?

Today, sequoias are largely confined to specific places in California, but ten million years ago they were a common tree across the temperate northern latitudes. Sequoias aren’t in their best of all possible habitats, but simply in the habitats available after migrating “miles and millennia,” and “dead end after dead end until it was finally just these few scattered groves, growing in the only suitable places they’d managed to reach.”

Now drought and decades-long fire mismanagement threaten their survival, while an all-too-human footprint blocks their journey elsewhere. But what if the sequoia’s future could be assured by moving it farther north to an old habitat? Or even to new habitats in the southern hemisphere?

It’s tempting to say that planting a tree is the answer, but as St. George shows, often it’s just a whole tangle of new questions. Planting the same trees in the same places means the same survival pressures from drought, fire, or other threats. Yet one person’s “assisted migration” of a beloved tree may be someone else’s newly arrived nuisance species that will outcompete the native flora.

Even more troublesome are the species that arrive on their own. No one knows exactly how the emerald ash borer hitched a ride from Asia to America, but in its native habitat that ominous insect was held in check by predators and the defenses trees developed through natural selection. Once free of those constraints, it took the emerald ash borer a mere 30-odd years to turn America’s once ubiquitous ash forests into what may soon be only memories and photographs.

Whether it’s ash or chestnut, Florida torreya or Monterey pine, The Journeys of Trees is as much about the human relationship with trees as it is about botanical migration and climate. When explaining the conundrums of invasion biology and counter-pest strategies, the intricacies of a niche, or the determinants of climate velocity, St. George keeps the science accessible to ground readers in the ethical, logistical, and other puzzles on how or whether to save the world’s forests.

If there’s hope in this story, and there is, it’s in the heroism of scientists and tree advocates who look at the forests disappearing from fires, drought, deforestation, climate change, and other human-induced harms and ask “What can be done?” not in irony or resignation but in a passionate commitment to a future with trees.

St. George closes this thoughtful and comprehensive book with an account of climbing a sequoia high past the “kill zone” in order to collect seed cones, musing how the seeds gathered might become seedlings sent “to places unshaded by sequoias for thousands or millions of years,” where perhaps, one day, “someone would stumble upon them, giants lost in a sea of lesser trees, and gaze up at them and marvel that the world could hold something so big and ancient and changeless.” It’s a future worthy of hope and action.