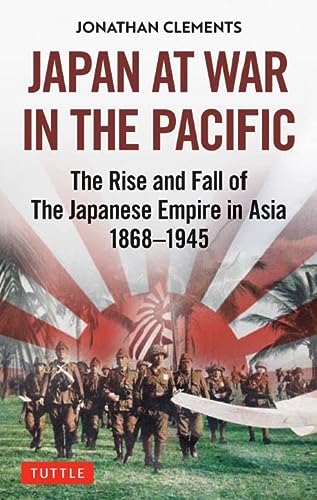 “Jonathan Clements’ new book Japan at War in the Pacific is a lucid history of the rise and fall of militarism in Japan . . .”

Jonathan Clements’ new book Japan at War in the Pacific is a lucid history of the rise and fall of militarism in Japan from 1868 when the Tokugawa Shoguns fell victim to a coup d’etat known as the “Meiji Restoration” to Japan’s calamitous defeat in the Second World War.

Militarism led to imperial expansion and war, as Japan’s rise coincided with a growing struggle for power and influence in East Asia and the Pacific littoral, especially in China. Japan was a latecomer to this struggle and initially eyed Taiwan and Korea for annexation.

Clements writes that Japan’s turn to militarism was caused by an “ideology forged in the rush to lift Japan out of its unequal treaties, and to secure a ‘cordon of interest’ beyond its historical borders.” The “unequal treaties” were foisted on Japan by the United States beginning in the 1850s. And he notes that the military’s rise to power was at times met with resistance by “politicians and pacifists who refused to believe that Japan needed to arm itself against threats real and imagined.”

Clements describes what happened in Japan as a “slow creep of [the] militarist agenda” in the armed forces, the government, the institutions of the state, and ultimately in Japan’s popular culture. By the 1920s, he writes, “Japan was preparing for total war—against an enemy still to be decided, purging itself of any dissenters or doubters, and zoning out territories overseas to be acquired in order to secure the resources for its own protection.”

Japan’s army fell under the influence of Jacob Merkel, a Prussian who was hired to reorganize and modernize Japan’s ground forces. Under Merkel’s influence, Japan created a General Staff that helped to institutionalize the military’s growing power. It was Merkel, Clements writes, that first described Korea as a “dagger pointed at the heart of Japan.” Japan’s navy, meanwhile, took to heart the lessons of Alfred Thayer Mahan’s The Influence of Sea Power upon History.

And in part due to Mahan’s influence, the United States was becoming a Pacific and Asian power by annexing Hawaii and taking possession of the Philippines and Guam as a result of the Spanish-American War. Astute observers, including Japanese and American naval strategists, intuited a coming clash between both of these rising Pacific powers.

But first, Japan clashed with China in 1894, winning a string of victories in Korea, landing at Dalian and Port Arthur, and occupying Taiwan and parts of Manchuria. In this war, Japan’s soldiers committed atrocities, including the massacre of civilians in Port Arthur—a foreshadowing of the cruelties and barbarism of Japan’s army in China in the 1930s and elsewhere during the Second World War.

A decade later, it was Russia’s turn to suffer a string of defeats at the hands of Japan’s army and navy, most famously at Mukden in Manchuria and at sea in the Battle of Tsushima Strait. The Treaty of Portsmouth ended the war, but despite besting Russia on the battlefields and at sea, Japan was dissatisfied with the peace terms and eventually the government of Prime Minister Katsura Taro fell as a result. The peace between Japan and Russia was mediated by President Theodore Roosevelt, giving Japan yet another grievance against the United States.

In the wars against China and Russia, Japan’s resources were stretched to the breaking point, and its military leadership demanded a larger share of the budget. And the army and navy fought each other over resources, influence, and strategy. Clements shows that this trend continued right through the Second World War.

And the growing influence of the military in domestic politics laid the groundwork, Clements explains, for “State Shinto,” which involved “Emperor worship and a martial spirit.” And State Shinto was promoted in Japan’s schools and in popular culture, especially music. Throughout the book, Clements shows the influence of the military on Japan’s cultural and educational institutions.

Japan’s involvement in the First World War was limited. While the European powers waged unrelenting war against each other, Japan increased its influence in China and took possession of former German colonies in the Pacific.

In the 1920s, militarism gained the upper hand in Japanese politics. Clements describes a military hierarchy that increasingly believed it should answer only to the emperor. Meanwhile, civilian officials who stood in the way of militarism and imperialism risked and sometimes suffered assassination. The militarists believed that Japan needed greater resources and more “living space,” and they looked to China, Manchuria, and the Dutch East Indies.

In 1931, Japan manufactured an “incident” to push into Manchuria, eventually establishing a colonial protectorate they named Manchukuo. And Clements notes that the fighting there “spilled over” into Inner Mongolia which heightened tensions with the Soviet Union.

Some historians mark the “incident” leading to Japan’s invasion of Manchuria as the real start of the Second World War in Asia. Others, however, point to another “incident” in 1937 at the Marco Polo Bridge near Beijing when Japanese troops (garrisoned nearby as a result of the Boxer Rebellion settlement) claimed they were fired on by Chinese troops. That led to Japan’s full-scale invasion of China.

What followed was the brutal, violent conquest of parts of China by Japan’s army, and more atrocities, including the infamous Rape of Nanjing. Japan’s aggression brought condemnation from the League of Nations, and the United States imposed a trade embargo, including on oil, which threatened the militarists imperial program and imposed hardships on Japan’s population.

Then in 1939, Japanese and Soviet forces clashed along the Manchurian-Mongolian border. Both sides used fighters, bombers, and tanks, and the Soviets gained the upper hand, but soon settled for a ceasefire. The results of this fight reinforced the Japanese Navy in its “southern” strategy and set Japan on a course to clash with Britain and the United States.

Clements notes that in June 1940, Japan’s leaders issued a policy document that envisioned Japan dominating “Greater East Asia,” which included China, Manchukuo, the South Seas, Southeast Asia, and India. During this same time period, Hitler and Stalin divided-up Poland and parts of central and eastern Europe, while Hitler struck in the west, Stalin attacked Finland, and Italy’s Mussolini surged in Africa. The British historian Paul Johnson in his book Modern Times calls the period from 1939–1941, the “high noon of aggression” involving Germany, the Soviet Union, Italy, and Japan.

Japan’s militarists had a brief period of success after attacking Pearl Harbor, the Philippines, and the Dutch East Indies, but as their great admiral Isoroku Yamamoto remarked, by attacking America Japan had awakened a sleeping giant and filled him with resolve. The militarists brought Japan to utter ruin, as U.S. forces achieved costly victories on several Pacific islands, then destroyed Japanese cities from the air, culminating in the atomic bombings of Hiroshima and Nagasaki. The militarists sowed the wind and reaped the whirlwind.

Many of the high-ranking Japanese militarists were tried for war crimes. U.S. occupation forces under General Douglas MacArthur imposed a new Constitution on Japan that instituted liberal reforms and stripped Japan of its armed forces, except for a “self-defense force.” Militarism was erased from institutions and popular culture, but Clements expresses concern that Japan’s “far right” political parties are a “last bastion of some of the rhetoric and beliefs of the militarist era.”

Today, there is a renewed push in Japan for strengthening the armed forces—supported by the United States—as Communist China threatens to upset the Asia-Pacific balance of power. Japan has been a functioning democracy since the 1950s, yet even today proposals to increase and strengthen its military produce opposition both within Japan and among some of its neighbors. In Clements’ words, “the consequences of Japanese militarism continue to reverberate.”