Jane Austen: Her Heart Did Whisper 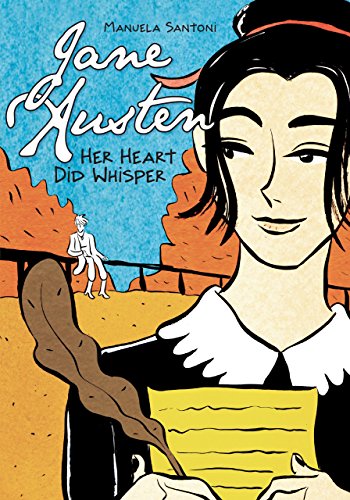 Jane Austen’s books are cultural touchstones, but the details of her life are less public. Most of what we know is reconstructed from letters. Austen’s single romance, an engagement to Tom Lefroy, is even more hidden, as Austen’s sister Cassandra apparently burned most the relevant letters after Jane’s death, at her request. We are left with an intriguing mystery: What was the secret romance in the life of modern literature’s original creator of romantic comedies?

Italian graphic novelist Manuela Santoni’s attempts to “fill in the blanks” of young Jane’s life with a series of black-and-white ink drawings full of wild swirls and playful caricatures. Some scenes, such as Jane’s invitation to a ball, have obvious manga-influences. Otherwise-controlled characters break into exaggerated facial expressions as their emotions overflow. Both joy and fury stylistically rebel against Regency restraint.

Much of the visual design, though, will jangle the aesthetic nerves of readers used to modern film’s refined portrayals of the period. Scholars of Regency dress might protest the mid-Victorian gowns and short skirts. However, the intended audience for the book belongs to neither of these groups. Instead, Santoni seeks to introduce “Jane” to young adults unfamiliar with Austen’s works and life.

The young-Jane protagonist resists feminine accomplishment and needs to be reminded that “Women must marry!” In this role, she is less the historical woman Jane Austen and more an avatar for modern readers unfamiliar with women’s historical status.

Young Jane is passionate. Her artistic drive seems more suited to a Romantic poet than a Regency novelist: “It was a revelation. I felt an energy inside, a feeling of freedom, calming my heart. To write. I wanted only to write.”

Though young Jane wants to write, she lacks the sharp wit and observational skill that characterized historical Jane Austen. Her sister Cassandra (Austen’s companion and auditor through most of her life) lurks in the background, pleased at the idea of Jane writing but not particularly engaged with her work. Jane’s supportive brother Henry, who acted as her literary agent, does not appear, nor do the other five Austen children. The busy family life that shaped her is replaced with a quiet, mother-driven home whose stifling atmosphere makes young Jane long passionate adventure.

Tom Lefroy arrives in the narrative like a pickup artist lost in time. He accosts Jane out walking and informs her that he dislikes her writing: “your own stories lack something. According to me . . . . Your prose is measured and precise. Maybe too measured. What’s missing is unpredictability. More passion! More ardor . . . or a person grows bored! See you soon, Miss Austen.”

This is not Darcy, speaking harshly of Elizabeth Bennet to conceal his own insecurity. Tom never gains such depth or complexity. His seduction of Jane consists of showing her a large private library. The library ploy worked for the Beast in Beauty and the Beast, and it works here, but with little justification. Why are these two drawn to each other? We’re not given much insight. When the romance wanes and Jane chooses writing instead of marriage, it doesn’t feel like a great loss or a difficult decision.

It’s difficult to capture great artists in art. If the tone of their work and the quality of their genius are lost, then little is left. Santori reduces Jane Austen to a bemused and love-struck teenaged girl with little personal agency. She’s an easy avatar for a young female reader but not one who can lead that reader to an interest in Austen herself.

Jane Austen: Her Heart Did Whisper is inoffensive and well-drawn; a reader with no interest in Jane Austen might find it a perfectly pleasing way to spend an afternoon. Anyone wanting to introduce a young reader to Jane Austen’s life and work should pick up something else instead.