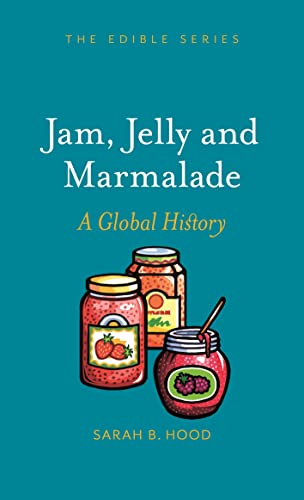 “The long history (and struggle) behind every jar of fruit preserve makes for a gripping read, and this little book will not disappoint neither culinary historians nor home cooks.”

Sometimes little things are full of big surprises. This tiny book is jam-packed (pun intended) with history and information. Award-winning jam-maker Sarah B. Hood has crammed a lot of history, culture, facts, and figures into the 160 pages of Jam, Jelly and Marmalade: A Global History.

There is a small miracle in every jar of jam, jelly, or marmalade, she writes, because instead of moldering away months ago, this particular batch of fruit lives on as preserves, long after the harvest.

The secret to jam-making and preserving is complex, and Hood credits human ingenuity to unlocking the secrets (and chemistry) behind the process. To make fruit gel, three elements are required: pectin, sugar, and acid.

Pectin is a water-soluble polysaccharide (a carbohydrate) that occurs naturally in plants. Some fruits contain more pectin than others. Pectin derived from apples or oranges is added to thicken jams and jellies.

Sugar in the ratio of 1:1 is needed to preserve the fruit and keep the jam from spoiling. This may seem high (think: one cup of fruit to one cup of sugar) but commercial jams and jellies have even higher concentration of sugar.

Acid is important because a low pH (or high acid) environment is inhospitable to foodborne pathogens. In order to gel properly jams, jellies, and marmalades must have a low pH level of around 3.0.  When preserves are heated and sealed in sterile glass containers they will remain shelf-stable for two or more years.

The history behind the jars of jams, jellies, and marmalades is long, varied, and sometimes brutal. Hood is a natural storyteller, and her easy-to-read style packs quite a bit of information in this slim volume. This well-researched book traces the origins of sugarcane as well as Roman and Persian contributions to preserving. From the importance of sweets (and preserves) in banquets of the 1500s to the rise of home preserving in the 1800s, Hood has it all covered in her book.

Preserving and cooking food is our connection to our collective past. Hood demonstrates this connection while explaining the confection known as Spoon Sweets in Mediterranean homes. She writes, “How pleasant to be given a glass of cool water and a shot of strong coffee along with a fragrant spoonful of preserved cherries, bitter oranges or apricots, most likely served from a special glass dish!”

The book has plenty of snippets of enthralling facts demonstrated in the story behind the famous Cotignac d’Orlèans preserve.

The preserve made from the juice of quince was called cidonitum in Latin, a name derived originally from the Greek term for quinces. This word was modified over time where in England it became “quiddony” and in France it was termed condoignac and later changed to cotignac.

Hood writes, “There, it is said, a chef from the town that is actually named Cotignac traveled to Orlèans sometime in the Middle Ages with the recipe, which was enthusiastically received in his new home.”

This preserve is still made from quince juice thickened with sugar and tinted with red food coloring. Legend has it that Joan of Arc was rewarded with some after her exploits in 1429. Today it is considered an artisanal culinary treasure. Cotignac d’Orlèans has been internationally recognized by the Ark of Taste, a project of the Slow Food Foundation for Biodiversity. It is made by just one manufacturer, and only 25,000 little wooden boxes are filled per year to supply the entire world demand. Hood writes that Joan of Arc’s picture is still on the label.

Did you know marmalade was created by Jane Keiller (1737–1813) in Scotland while trying to preserve a shipwrecked cargo of Seville oranges?

History and facts are woven into dramatic tales in this tiny volume. Victorian entrepreneurs such as Edmund Crosse, Thomas Blackwell, Edward Pink, William Hartley, Chivers & Sons, and Wilkin & Sons all left an indelible mark on this sweet industry. Their stories make for captivating reading.

From labor unrest to wartime jam-making, Hood has way of making dry facts come to life. The 21st century saw a decline in food preservation (with exception to the back-to-the-land movements in the ’60s and ’70s) but the advent of the worldwide web would change everything. A slowdown in economic growth along with an interest in earlier practices caused a spike in home canning. Blogs about food preservation helped spread the world. The doyenne of home canning and preservation blogs is Philadelphia’s Marisa McClellan, and her blog Food in Jars has attracted hundreds of thousands of readers since its launch in 2009. Nowadays artisanal preserves can be found in farmers’ markets, fine food stores, and online.

Hood has included some old-time recipes for jams and jellies as well as pastries using the preserves. Recipes range from simple Strawberry Jam or Currant Jelly to unusual ones such as Raspberry Puffs or Apple Pudding with Pistachio Nuts and Apple Porcupine.

The long history (and struggle) behind every jar of fruit preserve makes for a gripping read, and this little book will not disappoint neither culinary historians nor home cooks.