Dance of the Jakaranda 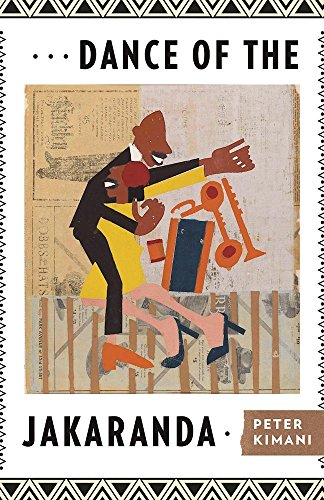 “a compelling story conveying a powerful social and cultural critique along with a marvelous portrait of the beauties and wonders of Kenya . . .”

Colonialism and Imperialism remain two of the major disasters of the last 150 years. It is also the gift that keeps on giving, and not in a good way. The British Empire left a legacy of death and destruction across the globe and created national and ethnic legacies of tragic proportions. This is just the kind of rotting compost from which good literature blossoms.

One of the places of legacy is found in East Africa where the British established their East Africa Protectorate in 1895 and staked their claim to the territory that became Kenya. The notion that anyone had previous claim, except Germany, was irrelevant to all concerned, with the exception of the people who had been living in the region for at least a century and a half.

Some will object that this historical summary overlooks the great economic and political developments contained in the positive impact of colonialism as the British came bearing what they termed “the three C’s:” Commerce, Christianity, and Civilization.

Peter Kimani’s compelling novel draws on this history honing in on the building of the Mombasa to Port Elizabeth Railroad, a project that transformed the economic and cultural landscape and set into place the pieces that facilitated the formation of the nation state of Kenya. The building of the railroad started in 1901 and Kenya became an independent nation in 1963.

Known as the “Lunatic Express” for many reasons that are revealed through the course of Dance of the Jakaranda, the economic impact is no surprise. The cultural impact, although less obvious, was more profound. To build the railroad the British dipped into the vast talent pool of India, another one of those places contributing to the cliché that “the sun never sets on the British Empire.” Some 30,000 Indians, including a large number of engineers and skilled laborers, were recruited from the “Jewel in the Crown.” The Indians stayed on in East Africa after the railroad was built and became the middle layer of capitalist society serving as professionals and merchants.

All of this is central to the trajectory of this novel of cultural misunderstanding and clashing values, ethnic competition and conflict, and the crushing power the British believed they possessed by divine or racial right.

Using the three main population cohorts Kimani triangulates the cultural relations and lays out the misunderstanding (some willful) across the cultural divides.

The time span of the novel from 1901 to the coming of independence in 1963 allows Kimani to reveal the generational divisions within communities. Two of the principal characters within the Indian Punjabi community are a grandfather, Babu, and his grandson, Rajan. The central British character is Ian MacDonald who is known as Master. Members of the indigenous African population serve as both Greek chorus and the source of a number of key characters in the unfolding drama.

Opening with the coming of the British railroad builders and colonial officers the novel moves deftly back and forth between the early and mid-20th century, at times with little warning. Characters appear and disappear, some to appear again, and others not. The intergenerational relationships fan out across time and space, and many of these characters produce irony, contradiction, and a number of surprises.

Character development is rich and the unveiling of cultures comes in waves and layers. Members from each of major groups regard each other as hopelessly primitive. This assessment is a key element and the heart and soul of Peter Kimani’s literary symphony. Readers familiar with the novels of Chinua Achbe will be familiar with the power of this device.

Rajan, the grandson, is a very popular singer at the nightclub in the Jakaranda Hotel and the storyline spins around him. One night before going onstage there is a power outage and in a darkened hallway Rajan is approached by a woman who kisses him. She quickly vanishes into the darkness. Rajan is smitten by the kiss and he sets out to find this woman with the only clues to her identity being her distinctive scent and the fact she was wearing heels.

So it begins, crisscrossing through time and place and at each step along the way the complexity of the story grows, especially after the kissing stranger is found. The characters are often not entirely who they seem to be. Their relationships develop in unanticipated ways. And through it all Kimani uses his skill as a storyteller and social critic to comment on the pernicious nature of the racially stratified society, including its long term consequences.

Events and personalities from Kenyan history are mixed into the story giving it a more authentic feel without it becoming a historical novel. Kimani’s talent in this respect compares favorably with that of E. L. Doctorow.

What Peter Kimani has achieved here is to write a compelling story conveying a powerful social and cultural critique along with a marvelous portrait of the beauties and wonders of Kenya, all punctuated with tragedy.