It's All Relative: Adventures Up and Down the World’s Family Tree 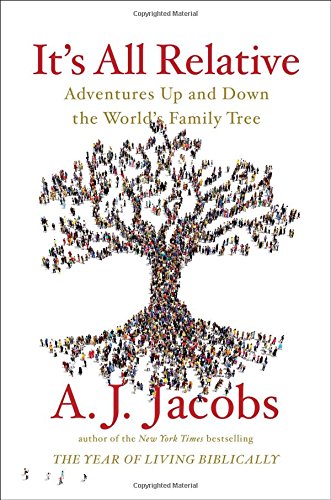 It's All Relative has less to do with America's leading pastime than A. J. Jacobs’ latest sustained adventure in our contemporary world. He chronicles his "adventure in helping to build the World Family Tree."

The oldest human endeavor, because recognizing family defines humanity, genealogy has little respect among formal scholarship due in part to its populism. Familial relationship, however, defines much of history. Jacobs makes that argument with sometimes irrelevant essays "a lot about the pros and cons of assimilation and identity."

The author began his journey when a caller from Israel was informed of his membership in a documented family tree of some 80,000 members by blood and marriage in 160 countries. The encounter brought back memories of his genealogist father's stories of his Polish and Ukrainian ancestors coming to America.

With genealogy "undergoing two revolutions," one in DNA and the other the Internet, the potential now exists to link all human beings together. The author uses those two innovations to discuss family in the broadest sense with no distinction between related by blood and related by marriage. Nature versus nurture does not get a chapter.

Jacobs set out to see what he can see, starting by listing the pros and cons of breaking the record for the largest family reunion ever. It has, he writes, "been the most fascinating, exhilarating, and occasionally frustrating experience of my life."

Often Jacobs had encounters common to all families such as finding where "certain relatives just disappeared" in his mother's records. The author met cousins on every continent including Antarctica, drank a beer with a president, and sang in the Mormon Tabernacle Choir.

"Genealogy has historically been a tool of the elite" and "celebrity genealogy is huge right now," Jacobs writes. He counts as kin Jackson Pollock, Barack Obama, Albert Einstein, and Halle Berry.

The author writes that "our shared ancestor would no doubt be proud." Yet he argues humanity is greater than any single group except for all of us.

Jacobs does not see his book as a research manual. He does discuss basics such as DNA that locates people "to be considered your blood cousins." It's All Relative uses humor to discuss sex, paternity, hereditary organizations, privacy, twins, black sheep, evolution, and the importance of children knowing family history.