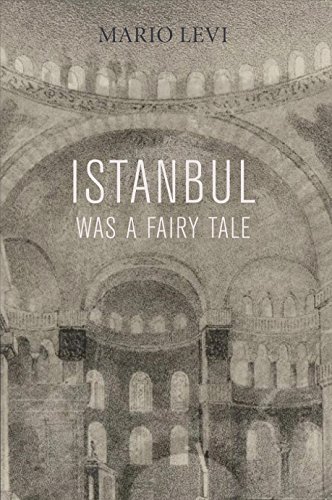 “. . . an engaging, rewarding, and sometimes lyrical search for a lost time.”

With the publication of this translation of Mario Levi’s novel Istanbul Was a Fairy Tale an important work of post-modern, Jewish, and world literature is now available to English speaking readers.

But the combination of its length, the narrator’s discursive ruminations in multipage paragraphs of dense prose, and its nonlinear structure will likely intimidate all but a few dedicated readers, which is a pity. After all, Mr. Levi provides his readers pauses within his long paragraphs by punctuating them with ellipses in the manner of Louis-Ferdinand Céline.

Even so, slipshod copyediting and flawed translations may further deter readers who should be prepared to correct the text’s grammatical and typographical errors on the fly.

The time period extends from the final decades of the Ottoman Empire until the late 20th century. For several generations they remain separate and distinct from their Muslim Turkish speaking (as well as their Christian Greek and Armenian speaking) neighbors. Each generation is better educated and more worldly than its predecessor, many of its members emigrate, and some of those who remain assimilate. They have sophisticated tastes and vices, some are alcoholics, and members of both genders are sexually promiscuous.

Unlike other countries where Ashkenazim and Sephardim formed separate and distinct communities, in Mr. Levi’s Istanbul the newcomers from the north are warmly welcomed and blend into the existing community.

For example, during World War I a Yiddish speaking Austro-Hungarian soldier visiting the city as part of a military delegation to its wartime ally suffers from amnesia. The Jewish community takes him in, finds him an apartment, sets him up in business, and integrates him into the community.

The Venturas are predominantly introverts creating the paradox of a warm inclusive family comprised of individuals who are each isolated in his or her own solitude (two characters are autistic).

Their stories are conveyed by a nameless first person narrator, who is simultaneously both an actor in the drama and an outside observer, and who defines intimacy as the mutual penetration by two partners of each other’s solitudes.

In addition to the nature of solitude, our narrator also ruminates at length on the subjective nature of memory, the imagination, and fiction writing. There is a self-referential aspect as the narrator, a fiction writer, talks about the process of recording his relatives’ recollections and turning them into fiction yielding the very book we are reading.

“It seems to me now more than ever that I’ll be able to transform my text to consist of the accounts of lives transmitted to me over the course of many years by men I’ll eventually, I hope, be able to patch up using all the fragments of their stories entrusted to me despite all the missing elements and prospective imperfections and hiatuses.”

Mr. Levi’s narrator’s ruminations are somewhat repetitive. In his preface he advises his readers to feel free to jump around in the text and read only as many chapters in whatever order they feel like, an instruction reminiscent of Ian Anderson’s first line (“I really don’t mind if you sit this one out”) of Jethro Tull’s album-length song “Thick As a Brick.”

Readers who don’t care for dense prose may feel that album’s title fits this book as well, but as already noted the novel is a poor match for such readers who would do well to heed Mr. Anderson’s disclaimer.

The novel’s cast of characters numbers at least 50; 37 of them are listed, each with a short description, in a section at the start entitled “Who had stayed at whose place for whom?”

With so many characters a family tree in the form of a flow-chart would have been very helpful. The city of Istanbul is also a character.

In an interview Mr. Levi uses the metaphor of a river to represent the narrative as a whole, each character’s story a tributary. The scope of this review leaves insufficient space to discuss individual characters and their stories; prospective readers can get some sense of that by browsing the book’s chapter titles.

The book’s translator, Ender Gürol, usually translates in the other direction, from English to his native Turkish, as indeed it is the normal practice for the target language to be the translator’s native tongue. Reversing direction places the translator on less secure footing, and in this case here and there grammatical errors are found.

Comparing the uncorrected proof with the final edition reveals that the publisher’s copy editor corrected some, but unfortunately not all of these errors.

Mr. Gürol is overly fond of the past perfect tense and employs it when the simple perfect will suffice; all those “had”s followed by participles tend to pile up unattractively.

On the other hand when a character refers to a dream the narrator “held” the night before, “had” would be the more idiomatic verb. There are places where the pronoun “he” is repeatedly used but it is not clear to which male character the “he” refers; it is possible that in Mr. Levi’s Turkish this is less ambiguous, but in English changing some of those pronouns to the names of specific characters would be less confusing. Mr. Gürol often uses an obscure or archaic word when a common equivalent will do: a stronger willed editor would have issued a moratorium on Mr. Gürol’s use of the word “fain.” To his credit Mr. Gürol has a rich English vocabulary and, except for these certain complaints, employs it well.

Istanbul Was a Fairy Tale is recommended to readers who enjoy dense prose and have the uninterrupted leisure and focus its multipage paragraphs demand. A French critic describes the novel in its the French translation as Proustian, and though Mr. Levi lacks Marcel Proust’s minute details (his narrator confesses “At present I am no longer in a position to remember all of this in minute detail”), Istanbul Was a Fairy Tale is an engaging, rewarding, and sometimes lyrical search for lost time.