The Island: A Thriller (The Hulda Series) 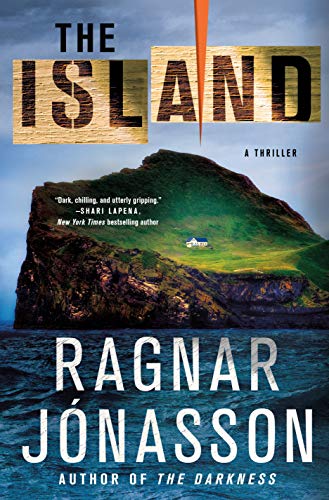 “[I]f you relish seeing how ordinary people of good heart and intentions can get twisted off the right path, and sink deeper into serious trouble while they wrestle with their consciences, then The Island will satisfy your desire to think, feel, and shudder to its logical and somewhat surprising resolution.”

Caveat emptor: If you like plots to be linear and told through a single character’s viewpoint, this novel will drive you batty.

If, conversely, you’re a more relaxed reader and love stories that snatch you up by surprise and carry you along in unrelenting suspense, then this brilliantly woven tale will give all you crave.

The Island is a multiple-murder mystery that moves back and forth from the 1970s to the ’90s, and through many characters’ heads. In the latter respect, it’s hard to figure out who the central character is. However, because it’s ultimately a police procedural, we’re taken through the investigation by Detective Inspector Hulda Hermannsdottir, who works for the Reykjavik police department in Iceland.

The Icelandic setting is appropriate not only for the story but also for its dark tone. A volcanic land unfamiliar to most readers, Iceland is unique in many ways and far enough up there in the northern latitudes to be a dark and desolate place much of the year. Perfect for dark and desolate deeds, and desperate characters.

The book is chock-full of both.

Each character is a decent soul at heart, compromised like most of us by life’s travails: efforts that don’t pay off, family members not providing needed support (or simply dying early and depriving one of guidance and comfort), mistakes so humiliating one can’t bear having them revealed, and/or loving the wrong person and desiring to protect them.

All the characters make a bad choice at the wrong time, with a long string of consequences that helps create the tangled mess leading to, and covering up, two murders ten years apart on a remote island.

The Island is book two of the intended Hidden Iceland trilogy, but you don’t need to have read the first (The Darkness) to comprehend and appreciate the second. Author Jónasson has gained a reputation for “Icelandic noir” through his previous works, and he keeps that noir-ness going here.

The question is, this is a translated book, so . . . is the excruciating suspense a factor of the author’s skill, or the translator’s? Or both?

Regardless, what makes the book’s suspense excruciating is its creepiness. It’s creepy in pace, slowly layering the plot and character elements; and creepy in presentation, suggesting that every situation is more than it seems. Possibilities are left wide open for readers to fill in the blanks through their creepiest imaginings, until all the information is in, and the creepy situation is explained.

The typical thriller structure of closing chapters on a cliffhanger is replaced by a more subtle version. Each short chapter has an ominous undertone, a sense of impending doom, great or small, even if nothing dramatic happens right away; but all those insinuations add up to compulsive page-turning. The author’s trick seems to be hanging every scene on an unanswered question—then abruptly switching character viewpoint for story-building distraction. (This is what will drive linear folks nuts.)

Back to caveat emptor: If you need a shot of light in your recreational reading, skip this book. It is depressing in general and does not end happily, even though the murder cases are tidily resolved. If you strip down through all the layers, you’ll find a story about the power of weakness, which is never inspiring.

However, if you relish seeing how ordinary people of good heart and intentions can get twisted off the right path, and sink deeper into serious trouble while they wrestle with their consciences, then The Island will satisfy your desire to think, feel, and shudder to its logical and somewhat surprising resolution.