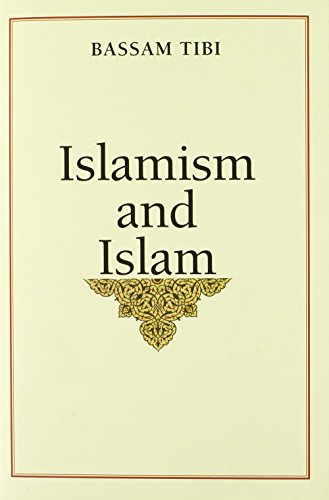 “A reasoned and systematic historical analysis of contemporary Islamic societies is a book still waiting to be written.”

In the preface to this book, its author informs us that the manuscript was submitted to four rounds of reviews and commented upon by eleven reviewers. We are led to believe that this was by reason of its sensitive subject matter, but after fighting through to its last pages, it is apparent there might have also been other reasons.

The main argument of Bassam Tibi’s book Islamism and Islam is that Islamism is a dangerous form of “religionized politics” with strong affinities to totalitarianism and anti-Semitism. By comparison, Islam is benign, even if not entirely beyond all suspicion, but in that it is not different from most religions that entail illiberal attitudes.

The problem in the case of the Muslim world is that since the beginning of the 20th century, Islamism has been on the advance. As a result, it today represents mainstream opinion even among so-called moderate Islamic parties like the AKP in Turkey or the Muslim Brotherhood in Egypt. This is also why Bassam Tibi is pessimistic regarding the outcome of the Arab Spring.

More than ten years after 9/11, there is not much that is novel in Islam and Islamism—and that despite its author’s persistence in viewing himself as an outsider whose concerns are not taken seriously enough. The names of Islamic thinkers tending toward extremism such as Sayyid Qutb, Hassan al-Banna or Yusuf al-Qaradawi are in the meantime commonplace in Islamic studies and political science, and likewise the inherent difficulties of Islam as a basis for a democratic polity. Indeed, Bassam Tibi has contributed significantly to this knowledge through his previous books and commentaries.

It is therefore disappointing that in his latest book, which he also considers his last, thus also a legacy, Bassam Tibi does not succeed in advancing his analysis any further.

The same arguments are reiterated chapter after chapter with little added value in terms of either theory or background material. Indeed, more space is devoted to Western debates about Islamism than to Islamic texts or societies. What is more, Islamism and Islam contains amazingly little information about Islam as opposed to Islamism; and what is frighteningly lacking is solid comparative historical analysis of the societies under investigation.

As a result, Bassam Tibi ends up treating the Muslim world homogeneously with little attention paid to the variation within Muslim countries (and Islamic traditions) or that between social and political trajectories of development.

A reasoned and systematic historical analysis of contemporary Islamic societies is still a book waiting to be written.