Isaac Newton, The Asshole Who Reinvented the Universe 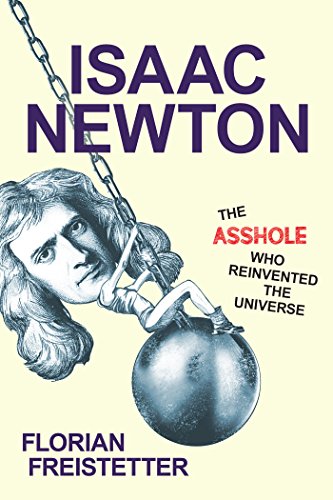 You were drawn to this review because of the bold title, right? The boldness, however, lies not in the expletive, but just before, with the definitive article “The.” Isaac Newton, according to author Florian Freistetter, is THE asshole who reinvented the universe! In the opening paragraphs, Freistetter piles on to add that Newton was also a selfish, “belligerent bully,” and a “jerk,” all of which put him in “a position to change the world the way he did.”

If this were a weighty, scholarly volume, we might be put off by such a burdensome claim. But this is a slim, captivating tribute to one of the author’s heroes, driven by colloquial language, good cheer, and sound advice on how science should work today.

Freistetter offers ample evidence supporting his claim that Newton had an abrasive personality. Whether this abrasiveness inspired his work, as he further claims, is less convincing. At times, it seems that collaboration and compromise might have better served him. Of course, there’s no way to know. And as you get caught up in Newton’s adventures in curiosity, the argument soon becomes secondary. What matters most is Newton’s unquenchable quest for knowledge—and how it sparks our own curiosity.

To study the process of vision, for example, Newton poked himself in the eye. Another time, he stared at the sun for minutes at a time, then locked himself in a dark room for days to recover. Refusing to blindly accept the science of his day, Newton preferred knowledge gleaned through his own such “experiments.”

The breadth of Newton’s interests and achievements are astounding. He was a warden of the royal mint and worked to stop counterfeiting. He studied astronomy, explaining through abstract math how the moon and sun affect the tides. He refined the telescope. He calculated that gravity is a universal force, and not by simply watching an apple fall. He even studied religion, trying to explain God from a heretic’s perspective. Perhaps most important, he wrote Principia, the text that shaped the very language of physics. That Freistetter in such a slim book is able to address each of these pursuits with nuance and depth is nothing less than remarkable.

Freistetter admits that “In the world of science today, Newton’s attitude would be disastrous.” Which is why he devotes several pages at the end of each chapter explaining the importance of understanding science, a warning that seems especially vital today: “Politics and society have to make the appropriate decisions and decide where and how new knowledge gained can or may be used. That can only seriously happen if society, at least to an extent, understands these issues.”

It’s our responsibility then to pay attention, to stay informed, to learn how to parse evidence from spin. And this book is one good starting point in that quest.