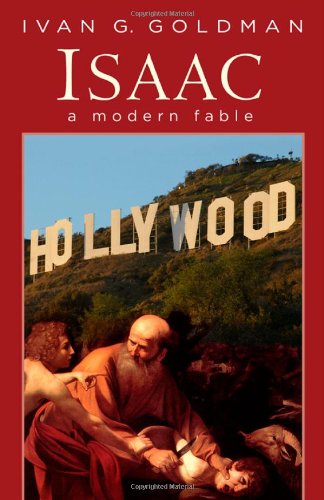 “With works such as Isaac: A Modern Fable under his belt, Ivan Goldman may not be a ‘minor novelist’ for very much longer.”

Heaven, hell, purgatory, God, and the Devil come into play in Ivan G. Goldman’s fabulous—in both senses of the word—new novel.

Isaac is a witty, dazzlingly intellectual story, an exploration of morality in the contemporary world, a true Modern Fable which, as one might expect from the author of such previous works as The Barfighter, pulls no punches.

This is a book which doesn’t shirk from posing tough existential, philosophical, and religious questions. It’s a mature novel, but it is also, by turns, very funny and quite moving. Populated by a cast of engaging characters, stuffed with remarkable Woody Allen-esque description, and searing social commentary, Isaac is at once a fable and more than a fable.

Above all, this is a novel about relationships and identity. It’s about the human condition. About finding a place for yourself in this hundred-miles-an-hour modern world. And about discovering other people who might just understand you.

Meet Isaac, Goldman’s protagonist. You know him. That Isaac. From The Binding of Isaac fame. Goldman’s story picks up where Genesis left off. This modern fable relates what becomes of Isaac after the highly traumatic moment when he was spared at the last from his father, Abraham’s blade. To “compensate” for this attempted murder, Goldman’s Isaac has been granted eternal youth.

Yet eternal youth is not as brilliant a compensation as it might seem; indeed, because Isaac’s life is “measured by its own peculiar clock,” he must keep his eternal youth a secret. He can’t form attachments. He’s been left to wander the earth, rootless and alone, for fear that if his ageless state is discovered, he’d be subject to a terrible fate.

Obviously, Isaac’s unique status has turned him into something of a psychiatrist’s wet dream. He’s angry at his parents, and, in a passage which recalls the English poet Philip Larkin’s memorable opening line to the poem “This Be The Verse” (“They fuck you up, your mum and dad.”) he claims:

“My father’s willingness to spend my young life has been, down through time, persistently mimicked by kings quick to squander the youths in their care. Both the Israeli army and the US Marines—two of the most proficient military forces on earth—prefer recruits no older than eighteen, before their spirit of sacrifice has a chance to be tempered with cold reasoning.”

He feels rather like his “prize” of neverending life places him at the center of some large cosmic, genetic, or practical joke: “Maybe I was that tree that falls alone in the forest with no one to hear. Perhaps a joke of some kind or the subject of a bet between God and Satan—as was Job when they turned his family, servants, and possessions into casino chips while using him as a now-celebrated lab rat.”

When we meet him, he’s taken on the identity of “Lenny.” Lenny works for a private security company and in his free time populates a world made up of coffee shops, Farmers Markets, and jazz. But simply by being in a certain Los Angeles coffee shop at a particular time opens him to a particular twist of fate which will change him forever, because it is there he meets and quickly falls in love with with Ruth Canby.

Ruth, like Isaac/Lenny, has yet to find her place in the world, to reconcile herself to a troubled past. Like Isaac/Lenny, she has parent issues. Abandoned as a child, she “grew up listening wistfully to tales of kids adopted by their foster parents. Eventually I decided these were fairy tales for orphans, or, more likely, that no one chose me because I was a defective model.”

She saw her job as: “to grow up in an Ozzie and Harriet family of never-faltering sweetness and caring, everyone white, suburban, clean, and calm, where any anguish would prove to be short-lived, unjustified, and worthy of one or two small jokes. But I’d failed miserably and shouldered the responsibility like Frankenstein’s creature, who tried to blame his creator yet mostly despised himself for the radically noon-conforming circumstances of his background.”

As well as being in familial limbo, Ruth is also trapped in the purgatory of post-degree academia, along with “forty thousand other English PhDs,” a circumstance this reviewer knows very well. “The hard facts of supply and demand forced us to settle for transitory jobs teaching basic courses to freshmen for part-time crumbs. In L.A., we’d even been given our own nomenclature—freeway flyers—as though we were a local basketball team.”

At the L.A. coffee shop, however, Ruth encounters her kindred spirit in Isaac/ Lenny. They meet in the aftermath of Ruth’s “disaster date,” an excruciating opening scene which involves much spilled coffee and recriminations. And they quickly become inseparable: “Because of the bizarre circumstances surrounding our encounter, there was no casual stage. We’d gone straight to premature intensity.”

But Houston, we have a problem. Because of his very particular personal circumstances, Isaac/ Lenny has made it a rule never to stay “attached” to a woman for more than a handful of dates. Even though he’s already in love with Ruth, he knows that he has to keep his ‘eternal youth’ secret from her at all costs. So he extricates himself from the situation in a messy fashion which might have female readers shaking their heads and muttering typical male.

Bereft, Ruth tries to put a brave face on it, and when a job offer comes in which seems almost too good to be true, she jumps at the opportunity, mainly in order that she can escape Los Angeles and move to New York. But often when things seem too good to be true, it’s because they are too good to be true. You see, the job offer has come from none other than The Beast, and, in accepting it, Ruth succeeds in selling her soul.

Enter The Beast. The Beast is another eternal presence in the novel. Well known to Isaac/Lenny—“There’s a façade to The Beast, a papier-mache quality to his phantom presence that’s like the world’s most obvious toupee, except no one can recognize it but me”—he’s a dangerous, infectious character who has the ability to offer everything the heart may desire. And he has a payment plan which at first seems very attractive. But the APR is hellish.

At first everything goes swimmingly for Ruth. She develops her dissertation (Eroticism and Refractory Currents in the Life and Work of Mary Shelley—a work concentrating primarily on Frankenstein, a book that also centers around the fragile relationship between “parents” and their “offspring”) into a book that sells like hotcakes. She “writes like the devil,” in fact.

But because she’s made her “deal at the crossroads” (another jazz reference here), Ruth must eventually pay. Hell awaits, unless Isaac/ Lenny can rescue her in time (and in the process revealing his true self).

Here, author Goldman posits questions about what hell actually is. “In his sequel to Catch-22, Joseph Heller theorized that hell—not figurative hell but true hell—was New York’s Port Authority Bus Terminal. He was off by a few miles only, because he didn’t live long enough to come through JFK during the post-Nine-Eleven terror.”

Just as in Heller’s work, Mr. Goldman’s hell is a place on earth. And it could also be a call center containing: “about twenty cubicles, each with a computer monitor. Their dim screens were the only source of light. Seated at them were barely human-looking wretches, their faces contorted in various expressions of anxiety, concern, and desperation. I heard a steady whimpering now, an occasional cough. Each specter was attached to the floor by one leg iron. The meat smell was overpowering.” Somewhere I also know well.

Isaac is a serious, intertextual work. Not only does Mr. Goldman create a dialogue with Heller and Mary Shelley, he also speaks to Orwell, Hunter Thompson, and James Joyce to name but a few. But beyond the seriousness, there is also some levity. Mr. Goldman’s writing sparkles with energy and wit. There are some great touches of humor: “The woman was an attractive blonde who looked like she had a black belt in Power Point.” And: “How people who aren’t haberdashers recognize one brand of suit from another I haven’t a clue. Can’t they fill their heads with more critical data? How to identify poison mushrooms, for example.”

Ivan Goldman is an engaging, gregarious writer. Indeed, so gregarious is he, he even puts in a guest appearance in the narrative (a la Martin Amis), showing his face at a glitzy party as “. . . an untroubled man in penny loafers who, I’d been told, was once a boxing columnist. He was also a minor novelist. Ivan something. Goldberg, I think.”

With works such as Isaac: A Modern Fable under his belt, Ivan Goldman may not be a “minor novelist” for very much longer.