The Irrationals: A Story of the Numbers You Can't Count On 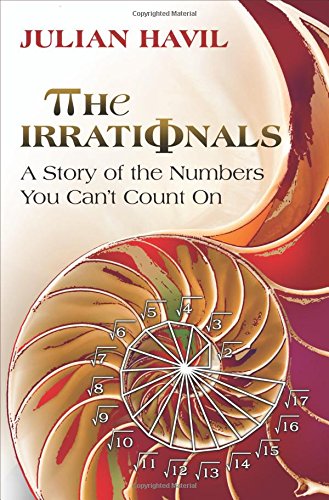 “Surprise! The Irrationals is a true mathematician’s and historian’s delight, not just another pretty book.”

Julian Havil provides the reader with an intense study of irrational numbers, expecting his readers to be fluent not just in mathematics but also in history and culture.

Amid the formulae and geometric diagrams there are quotations in Greek (translated, thank goodness) and references to the likes of The DaVinci Code and King Arthur (Le Morte d’Arthur). Citations are not at the end but woven into the text and footnotes. Julian Havil expects the reader to stretch—and stretching the mind is not a bad thing.

The documented appearance of irrational numbers is fairly well known, more or less. Somewhere around 450 BCE Greece, Pythagoras discovered the need for the square root of two (for measuring the diagonal of a square) without really understanding that the square root of two was incommensurable, that is, not exactly comparable to the sides of the square. As to “more or less,” there is papyrus evidence of Egyptians one thousand years before Pythagoras applying his theorem. Pythagoras’ advance was the use of formulaic relationships, all prior instances being without generalization.

We know very little about Pythagoras himself, and the author tells us what historians believe we can be reasonably sure of given that the first biographer of Pythagoras, Proclus, wrote one thousand years later. Historians tell us that Pythagoras believed in the perfectness of numbers and the presence of irrationals came as a shock, so much so that Hippasus of Metapontum, the discoverer of incommensurability was kicked out of Pythagoras’ school.

In Greece's other schools, those taught by Plato and Socrates, there was recognition of the validity of irrational numbers but no general method for their handling. Greek mathematics was predominantly geometry based and geometry can cope with incommensurability where arithmetic cannot. Incommensurability appeared in Greek arithmetic as contradictions for example, as to whether a particular solution using irrationals would be even or odd.

With the mathematician Euclid, circa 320 BCE, as with Pythagoras, we also have to rely on secondary sources for information. We know almost nothing about Euclid, and there are no surviving copies of Euclid’s original text on mathematics, Elements. Although an appendix to Elements addresses aspects of incommensurability, the first of Euclid’s mathematics “given’s” is universal commensurability.

A great deal of mathematics can be done without the use of irrationals. Euclid knew irrationals existed, but ignored them. Despite this hole, Elements was so good as a mathematics text it bested all others for a thousand years.

Mr. Havil makes the point that irrational numbers are unavoidable with almost any exploration of geometry and walks the reader through the discovery of incommensurability inside a number of geometric diagrams.

Historical evidence shows that although the Greeks did much with mathematics, the Romans did not, so the next advance in the study of irrational numbers had to wait for mathematicians from the Indo and Arabian Empires in the period between 200 and 1200 CE. Their major contribution was the replacement of Euclid’s geometry with irrational magnitudes in order to handle problems that could not be solved with straightedge and ruler.

The Indian civilization not only accepted irrationals as numbers, it also calculated Pi to 11 decimal places.

The Arabic empire of this period has two notables, Al-Khwarizmi whose name and work can be found in the words algorithm and algebra and Abu Kamil who did some very complex arithmetic (point intersections of surfaces) all before the year 1000 CE.

The author refers to irrational numbers in this chapter as “surds” for the Greek word inexpressible translated to Arabic then translated to Latin, surd being the word for mute of deaf. The author uses the word surd frequently from here on in but its repeated use does not make it more familiar. Surd? Absurd.

The European early middle ages brings us poetry, Chaucer, and greater familiarity with irrationals through the works of the greatest theoretician of his age, Leonardo Pisano Bonacci, commonly known as Fibonacci.

Other mathematicians of this period who worked with irrationals include John Duns Scotus, whose name gives us the dunce cap (the cap given for religious sophistry, not for poor math skills), Thomas Bradwardine, and Nicole Oresme.

We also see the first time use of modern mathematical symbols by the German Augustinian monk Michael Stifel, as well as decimal numbering by the Dutchman Simon Stevin.

At the end of the 16th century we come to the well-known mathematicians Pierre de Fermat and Rene Descartes. With these two, arithmetic is put in service of geometry. As each independently invents analytic geometry, they become life-long rivals.

The Irrationals explores the mysterious nature of Pi, which is not only irrational but is also a different kind of irrational, a number constructed by the sum of fractions. Though pi’s continued fraction representation was discovered by Euler, the proof that pi was irrational belongs to Johann Heinrich Lambert, the details of which the author outlines in all its glory.

There are numbers that are irrational and possibly complex and are summations of fractions that are not expressible by roots. These numbers are called transcendental, and are expressed by the zeta function. That zeta(2) is irrational was proven by Euler, but zeta(3) was not proven until 1978 by Greek-French mathematician Roger Apery.

The author identifies Apery’s proof as one of the most significant mathematic events of the 20th century. Apery died in 1994, and the author in a curious appendix provides directions to Apery’s tomb should any reader choose to visit.

Not only can irrationals be formed by continuous fractions, irrationals can also be approximated by simple fractions. Pi may be represented by 22/7, a number that is accurate to three decimal places. Other fractions may have even greater accuracy but in the process of identifying fractions to represent irrational numbers, some will be easier to find than others and the author provides an exploration into the effort of calculating the efficiency of approximation.

Are irrational numbers random? One shouldn’t assume that just because a number is irrational that it is also random. The concept of randomness is subtle and its domain belongs to statisticians whom the author apparently does not consider actual mathematicians (and one hopes this is a typo or editor’s slip, that that the author meant to say that statisticians are not number theorists).

The last chapter “Does Irrationality Matter?” is a tour of various, seemingly random irrational topics. Among them the author explores music theory, calculates the optimal shape for speaker cabinets, and examines Penrose tiles.

From the beautiful cover illustration—a cross-sectioned nautilus shell annotated by square roots—one expects something superficial but respectful on the order of a coffee table book.

The Irrationals is a true mathematician’s and historian’s delight, not just another pretty book.