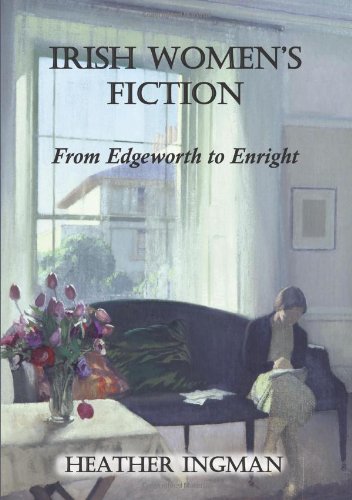 This is a book that with its very title raises eyebrows as well as questions. Can it really be right and proper in these liberated times to pigeonhole writers not only by nationality but also by gender?

Ms Ingman capably justifies this with the observation that ”one must start somewhere and the division of literature by nationality has had the merit of establishing a solid canon of Irish fiction from Jonathan Swift to John McGahern.”

Yet she argues that Irish women writers “repeatedly disappear from Irish literary history.” This book makes a very solid argument that she is correct as well as representing some of these long forgotten gems.

The works of numerous Irish women writers are examined, grouped according to various historic times. But these are not just chronological periods. Cultural and political backdrops are employed to anchor the reader in the Irish literary landscape, and to present the conflicting worlds of Irish men and women, Catholic and Protestant, rich and poor.

Yes, the entire world evolved and changed dramatically over the 250+ years covered by Ms Ingman’s chosen authors. But Ireland, and Irish women in particular, have faced—and still face—unique challenges. Seeing these reflected in the fiction of the day introduces an enticing perspective on social and political history.

The book embraces novelists from the eighteenth century right through to the chick lit era and beyond, with “a good number of smart postfeminist writers who cast a sharper eye on Irish life during the Celtic Tiger era than the authors of chick lit.”

And it considers several authors in the preceding decades, including well-known writers such as Edna O’Brien and Iris Murdoch who not only began to explore female sexuality within the pages of their novels, but also challenged the ideological shackles Irish women still bore.

Described as one of the “literary foremothers”, Maria Edgeworth (1767–1849) was once the best-known and most influential Irish writer. But she was actually born into a wealthy family in Oxfordshire, before moving to Ireland in her teens with her reforming landlord father.

Like Jane Austen, Maria would write in the family sitting room, her prize possession a pen presented to her by Sir Walter Scott. But she too was a trailblazer, and her “ambivalence over the romance plot and the reduced role for women in the emerging Irish nation are all themes that will be picked up and developed subsequently by Irish women writers.”

Ms Ingman’s light touch combines with her in depth knowledge to lift her writing out of purely academic fields and into the realm of a voyage of Irish discovery and insight. The only downfall is it will leave the reader with a very long list of must-read books for the foreseeable future!