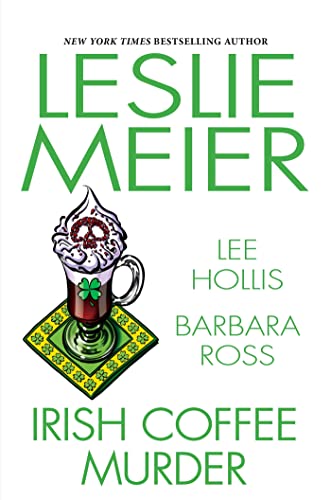 “Each story with its holiday thread will be well received by cozy fanciers.”

Each story is set in Maine at St. Patrick’s Day, and, of course, each has the requisite murder to be solved.

Irish Coffee Murder does not feel like a regular investigation, more an inquiry by accident. At 122 pages, the story has too many characters, and it is difficult to keep them in order. The protagonist, Lucy Stone, is a reporter for The Courier newspaper and the reader goes through over 50 pages (41%) of no heat in the office, a food pantry challenge, and an Irish dancing event before the murder occurs.

Four young girls compete in an event to identify the next one who will move up in statewide competition, and their mothers quarrel over who is best. When the costume of one of the girls falls apart (it was created by the mother of another girl), the arguments ramp up to accusations.

The mother who created the costume is murdered, and the search for the murderer begins. Initially thought to be a suicide, the death eventually is determined to be death by drowning, but the woman did not take her own life.

Lucy’s reporter instinct never quite takes off with the intensity of most cozies. One feels that she is stumbling onto clues that eventually direct her to the killer. There are not a lot of clues for the reader to point a finger at and arrive at the killer just after Lucy does.

Death of an Irish Coffee Drinker by Lee Hollis is a step up from the previous story. Although we get to 109 pages (30%), into the story before the murder occurs, it is well written and stays on track.

The characters are well developed and individualized, although it seems that Hollis has an aversion to last names. The protagonist, Hayley, owns Cleftstone Manor and Hayley’s Kitchen; her brother Randy owns the popular Drinks Like a Fish bar; and Liddy Crawford, real estate agent, Chairman of the Criterion Theater entertainment committee, and Hayley’s best friend, has scooped up the popular comedian, Jefferson O’Keefe to perform at the theater’s fundraising event. Then Randy offers his bar as an “after performance” party location, and Liddy confirms Hayley as caterer.

When Jefferson O’Keefe is murdered at Randy’s bar, clues drop like flies and suspects rise out of the dust of these characters.

Credit to Hollis as she ensures that Hayley knows she is not a detective and questions whether she should even be investigating. “Why can’t I let Sergio [police officer] do his job and just focus on the restaurant? . . . I’m totally incapable of staying out of things like this. I have to know what happened to that poor man.”

Hollis does a fine job of making everyone look guilty, but does not set enough clues to bring anyone to justice. But enough clues for Hayley to piece them together in a logical format and come to the valid conclusion. It is a well-designed cozy that fans will enjoy.

One drawback to the story is that Hollis inserts separate mini-stories with Irish recipes throughout the tale, which is distracting. The recipes are inviting, so perhaps the reader will not be sidetracked, but the side stories would be better removed, and the recipes placed at the end of the cozy.

The final one, Perked Up by Barbara Ross, is the shortest of the three stories at 93 pages, but easily the most likeable and readable of the three.

And here Ross redefines the cozy. As a snowstorm settles in Busman’s Harbor, Maine, an eclectic group of friends gather at Julia’s house, when a power outage occurs, leaving the house in darkness—a perfect setting for ghost stories.

With Julia, her friend Zoey, Julia’s mother and her friend, Captain George, all snuggled in the living room with a roaring fire for warmth, the question of the death of Hugh O’Hara arises. Captain George begins to discuss the cold case over 150 years old.

Just as Captain George is finishing his tale of Hugh’s death, the chapter ends with a knock on the door. Here Ross begins to bring her various characters into the story—characters of present day as well as those at the time of the murder.

Vee and Fee Snugg, neighbors from across the street, enter carrying their famous Irish Soda Bread. The sisters when they learn about the ensuing discussion, offer their own take on the cold case and it does not agree with Captain George, much to his chagrin. More historical characters become suspects.

The chapter ends with a rap on the window, and enter Julia’s previous landlord, Gus and Mrs. Gus. They bring a bottle of Irish whiskey and join the party. They also bring their own sense of Hugh’s murder and who the real culprit is. And yet again—different charges to different characters, different from Capt. George or the Snugg sisters and more historical characters, suspects, and arguments.

Julia’s sister Livvie arrives with her children, and soon her husband Sonny. The tale of a cold case murder tends to grow exponentially! New characters each with the same tellers-of-the-tale, each adhering to their own resolution to the crime.

As the evening wears on, it is apparent that this will remain an unresolved cold case murder of Busman’s Harbor, Maine, but now the information gleaned from each teller’s tale has gotten under Julia’s skin, and she sets out to see what she can learn.

Ross has carefully gathered all the clues and given them to Julia, whose search takes them to other areas of Maine, cemeteries, and town records offices where the clues come together and the story is resolved.

This is an extremely clever way to present a cozy. At the end of this story, Ross shares a recipe for Vee’s Irish Soda Bread. Well placed, not distracting, and a recipe that needs to be followed for any St. Patrick’s Day celebration.

Three short cozy stories presented in one anthology make for good reading, regardless of any of the drawbacks. Each story with its holiday thread will be well received by cozy fanciers.