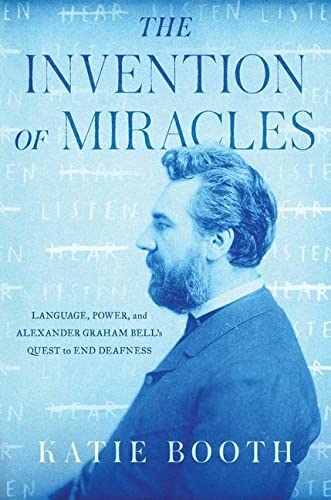 “The Invention of Miracles paints a textured portrait of a man driven not by an entrepreneurial desire to invent a product that changed the world but by a passion to improve the lives of deaf people.”

“What hath God wrought.” With these four words transmitted symbolically over an electrified wire from Washington, D.C., to Baltimore in 1844, Samuel Morse launched the modern era, the invention of the telegraph.

Alexander Graham Bell was born three years later, in 1847, in Edinburgh, Scotland, a true son of the modern era who invented the telephone. Katie Booth, in her biography of Bell, The Invention of Miracles, paints a textured portrait of a man driven not by an entrepreneurial desire to invent a product that changed the world but by a passion to improve the lives of deaf people. Booth interweaves these two themes into a revealing biography that will enlighten readers.

Bell’s father, Melville Bell, was a noted “scientist” who studied and taught “elocution” to the deaf; Bell’s mother became deaf at 12 years of age. Bell the elder pioneered a process known as “Visual Speech” to teach deaf people to speak. Science during the pre-Civil War era was different then it is today. Booth notes that “like much of this age of medical theaters and the budding freak show, Melville’s [Bell] exhibitions [of sounds] had air of the mysterious and mystical.” She adds, “science wasn’t yet separate from entertainment.”

As a youth, Alexander assisted his father at the exhibitions, first in Scotland, then in London and then, following the deaths of his two brothers from tuberculosis and his own ill health, moving with the Bell family to Ontario, Canada, in 1870. Booth follows Bell who, at age 24, moved to Boston taking teaching a position at the Boston School for Deaf Mutes, followed by engagements at the Clarke School for the Deaf (Northampton, MA) and the American School for the Deaf (Hartford, CT).

One of his early students was Mabel Hubbard who had lost her hearing at age five and whom he would eventually marry. Her father, attorney Gardiner Greene Hubbard, supported Bell’s teaching efforts, helping fund the School of Vocal Physiology and Mechanics of Speech in Boston; one of his students was the young Helen Keller. Gardiner Hubbard long opposed the monopoly control then exerted by the Western Union Telegraph Company and backed Bell’s invention as a viable alternative.

In 1873, Bell became a professor of vocal physiology at Boston College, teaching his father’s Visual Speech method during the day and, at night, working on an invention he dubbed a harmonic or musical telegraph. Familiar with acoustics, Bell thought he could send several telegraph messages at once by varying their musical pitch.

On June 2, 1875, while experimenting with his harmonic telegraph, Bell and his assistant, Thomas A. Watson, discovered that sound could be transmitted over a wire. Bell, not unlike Morse, is all-too-often remembered for one famous line—“Mr. Watson—Come here—I want to see you"—considered the first words spoken over the telephone.

On March 7, 1876, Bell secured a U.S. patent covering “the method of, and apparatus for, transmitting vocal or other sounds telegraphically . . . by causing electrical undulations, similar in form to the vibrations of the air accompanying the said vocal or other sound.”

Bell displayed his new invention at the 1876 Centennial Exhibition in Philadelphia. The Emperor of Brazil, Dom Pedro II, exclaimed, “My God, it talks!” Several other demonstrations followed—each successful at a greater distance than the last. On July 9, 1877, the Bell Telephone Company was organized, with Emperor Dom Pedro II being the first person to buy shares. One of the first telephones in a private residence was installed in Dom Pedro’s Petrópolis palace.

In 1885, the American Telephone & Telegraph Company (AT&T) was incorporated as a subsidiary of Bell Tel to build and operate the first long-distance telephone network. In 1899, AT&T bought Bell's assets and became the parent company of the entire Bell system. He spent the resent of his life seeking to address the needs of the deaf.

Much of Booth’s biography carefully details Bell’s personal life and his marriage, she does not spare a careful assessment of his theories and politics. She notes he rejected the use of American Sign Language and supported the eugenics movement, advocating restrictive immigration of what he termed “undesirable ethical elements.” In 1883, he presented data to the National Academy of Sciences indicating that congenitally deaf parents were more likely to produce deaf children and tentatively suggested that deaf people should not be allowed to marry each other.

Booth has exhaustively researched Bell’s long life in preparation for her biography and provides many invaluable insights and information. However, reflecting the aesthetics of contemporary narrative nonfiction, the author repeatedly takes certain liberties in attributing psychological motivations to Bell like sayings, “It must have been dawning on him” and “there must have been that dread.” This is but a small price to pay for an informative and revealing biography.