INSURGENTS, RAIDERS, AND BANDITS: How Masters of Irregular Warfare Have Shaped Our World 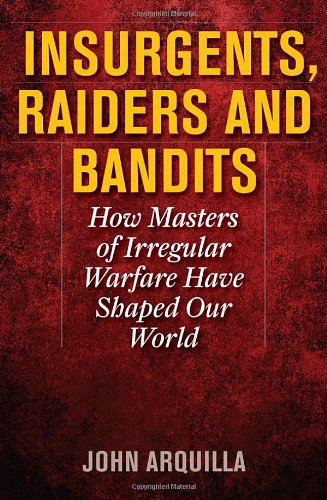 “Mr. Arquilla adds to his academic muscle with an enjoyable work that reads less like history and more like an adventure story.”

Where conventional warfare is familiar as large numbers of forces, squadrons of planes, fleets of ships massed against an enemy with similar attributes, irregular warfare is defined by its small sized units using stealth and ambush as tactics and the land itself for support. Author Arquilla breaks irregular warfare into three parts: small unit tactics; guerilla warfare using small bands of fighters who strike then fade back into the wilderness—or nowadays, the city; and terrorism: the ugly little brother of irregular warfare with its killing of the innocent and ultimate failure.

Mr. Arquilla divides the chapters of the book between the 18 guerilla leaders who did the most to establish and adapt irregular warfare. Starting during the French and Indian War and going up to the Russian incursion into Chechnya, Mr. Arquilla covers a wide range of time, geography, terrain, and forces.

Again and again Insurgents, Raiders, and Bandits entertains and enlightens beginning with Rogers’ Rangers during the French and Indian War (1754–1763). An army fighting on the American frontier among its forests and rivers had to master “Indian-style” style fighting. During the Revolution, Washington all but insisted on a conventional army, even hiring drillmasters such as Baron von Steuben to make them so. Nathaniel Greene did not agree with that idea and his campaign in the South surprised Britain’s General Cornwallis by splitting his forces and reclaiming towns and cities vacated by the British.

Mr. Arquilla continues with Francisco Espoz y Mina and the Peninsula Campaign and Denis Davydov raiding the Grande Armee during the Napoleonic Wars making use of local support and “people’s war” as elements of irregular warfare. Having their own problems with the French, Algeria’s Abd el-Kader and his forces used the vast desert and movement to outfox five different French commanders. More than proving the efficacy of irregular warfare, Giuseppe Garibaldi and his forces built a united Italy.

During the American Civil War, the Confederacy’s Nathan Forest showed the abilities of fast moving troops serving more as light infantry than cavalry and surprisingly giving new perspective to his involvement in the Ku Klux Klan. From that point on every major war and all minor ones had some element of irregular warfare.

The Indian Wars had George Crook hounding Crazy Horse and Sitting Bull. The Boer War’s Christiaan de Wet brought his forces back from near annihilation and used flying columns to leapfrog British forces. During World War I Germany’s von Lettow-Vorbeck and his Schutztruppe in East Africa succeeded in siphoning off 150,000 Allied troops from the Western Front while T. E. Lawrence proved that the same new technologies that helped armies like the telegraph and rail, their disruption can be used as a weapon against them. The inter-war years saw British officer Orde Wingate fighting slave traders in Sudan and later Arab raiders in Palestine by taking the offensive and being willing to use local fighters and local knowledge.

Armed resistance against the Germans, Japanese and their allies spread during World War II, creating smaller irregular wars everywhere: the American submariner Charles Lockwood at sea and Josip “Tito” Broz in Yugoslavia and many others adapted old tactics and invented new ones.

Irregular wars have been the norm since 1945. The 1950s saw Frank Kitson fighting the Mau Mau in the new nation of Kenya and Arab tribesmen in Yemen then in Northern Ireland. During the long Vietnam War North Vietnam’s Vo Nguyen Giap is shown as displaying a mastery of irregular warfare in his defeat of numerically and qualitatively superior French and American forces. Mr. Arquilla finishes with the Chechen leader Alsan Maskhadov and his embarrassment of Russian forces.

Insurgents, Raiders, and Bandits is a great overview of irregular warfare for the student, academic, and lay reader. Mr. Arquilla adds to his academic muscle with an enjoyable work that reads less like history and more like an adventure story.