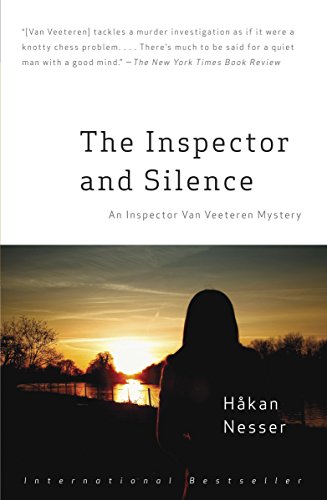 “. . . a nice book to read at a summer cottage by a lake, the sun shining, a couple of bottles of beer in the cooler. . . . Come to think of it, that scenario works pretty well without the book. Maybe that’s the real problem.”

It’s a hot summer. For Sweden, hotter than inside the gates of hell. In The Inspector and Silence—the tenth novel featuring Inspector Van Veeteren—one gets the distinct feeling that after 35 years our protagonist has had enough. He’s witnessed too much death, too much suffering, seen too much of the darkness that lies within others. Even his ex-wife gives him bad dreams. He feels she’s stolen 25 years of his life—and he openly despises her for it. He’s dreaming of taking a vacation to Crete in the hopes of meeting a particular woman, and upon returning, leaving the cop shop and becoming part owner of a used bookstore.

However (and you knew that was coming, didn’t you?), a chief of police from a nearby jurisdiction has gone on vacation and left Sergeant Kluuge, an officer with little field experience, in charge. He is to be acting chief of police—unless something goes wrong—in which case he should call in Inspector Van Veeteren.

And, of course, something goes dreadfully awry.

Sergeant Kluuge receives two anonymous phone calls from a woman who claims a girl has disappeared from a religious sect called Pure Life, a cult founded by a self-proclaimed prophet. After a second call from the same anonymous woman claiming that if nothing is done, more will die (no bodies have been found yet), Van Veeteren is sent to the idyllic town of Sorbinowo to make sense of the situation.

It soon becomes apparent that the cult’s prophet, one Oscar Yellinek, a convicted sex criminal, has three concubines. His camp is attended by pubescent girls and many of their activities on the road to salvation are performed in the nude. The members of the sect attending the camp deny that any girls are missing, but then there is a third call, with the caller giving directions on how exactly to find a girl she claims is dead. The girl is indeed found raped and strangled, and most certainly dead.

Van Veeteren recognizes the girl. He had actually spoken to this particular victim the day before she died, so this couldn’t have been the body of the girl first reported missing by the anonymous caller. The feeling is that a second, unknown girl is missing and presumed dead. But the members of the sect are patently uncooperative when it comes to helping Van Veeteren find or even identify the missing girl.

Van Veeteren is faced with a case of the most horrible nature, in which he has little evidence. He must solve it with a combination of logic and intuition. He has only ever failed to solve one case, for he builds them slowly, contemplatively, patiently. He watches and waits. And this method works for him: the cases are almost always solved. Some readers may enjoy partaking in this grimly methodical manner of deduction. Some may be bored senseless.

One could think of Van Veeteren as colorful and cynical. One could regard him as a bitter eccentric in a boorish way. He often thinks of his cases in terms of chess. But not everyone enjoys watching others play chess. Some may find that the long—albeit well written—descriptions and repetitions of his habits provide atmosphere. Others may lack the patience for it. If the character and pace suit your mood and inclination, snatch up The Inspector and Silence.

Here are the major rubs:

A glut of characters: This is a relatively straightforward case with a surfeit of characters from hither and yon that come out of nowhere but contribute little. It gives the feeling that they’re just popping by from previous books to say hello.

The killer should have been one of the first people investigated—but was not.

Serial killers: Swedish crime fiction sometimes gives the appearance that the country is in the thrall of the sexually deranged and murderous. This is along the lines of science fictions. Pure fantasy. Here are the facts about serial murder in Scandinavia. Serial killers at large in Sweden: none, for there has been only one convicted in recent history. For the curious: His name is Thomas Quick, a child molester who committed his first murder at age 14. Committed to closed psychiatric care in 1990, he confessed to 30 murders and by the year 2000 had been convicted of 8. Serial killers at large in Norway: none. Denmark: none. Iceland: none. Very few exist in the histories of those countries.

To reiterate, despite the complaints listed above, The Inspector and Silence is well-written and enjoyable book—if plodding suits your nature. It’s a nice book to read at a summer cottage by a lake, the sun shining, a couple of bottles of beer in the cooler. . . . Come to think of it, that scenario works pretty well without the book. Maybe that’s the real problem.