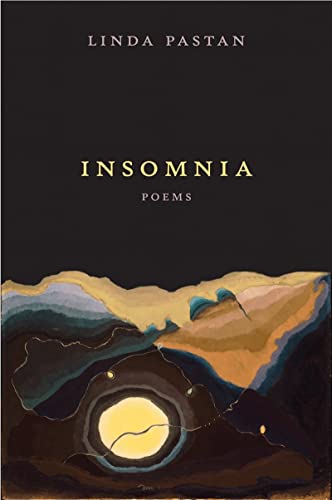 Linda Pastan has been writing poetry for a long time, and her many awards attest to the enduring popularity and critical acclaim of her work. Pastan has served as the poet laureate of Maryland. Among her awards are the Ruth Lily Poetry Prize, the Dylan Thomas award, and the Bess Hokin Prize from Poetry. Pastan is a poet of great feeling and insight. She is her eighties now, so her concern with mortality, evident in many of the poems in her new book, Insomnia, seems appropriate; however, that awareness of the ever-present sting of mortality is nothing new.

Pastan’s poetry is widely read. Is that because it is “accessible:” written clearly, without reliance on an ironic distance? The poetry in Insomnia is more than that. It is poetry that smoothly marries the concrete details of daily life with existential thinking. Along the way are encounters with art and nature, sickness and health, worry and tenderness.

The opening poem is “Insomnia: 3 AM.” It consists of six short, three-line stanzas; the poem is concise. The first stanza: “Sleep has stepped out / for a smoke / and may not be back.” The poem darkens in mood as it progresses, ending with the clock (the narrator’s only company) “ticking / through the dark / / remorseless / stations / of the night.”  The very short lines imitate the tick tick ticking of the clock as a sleepless person listens to it, waiting . . .

The book ends with “Musings Before Sleep,” a poem that is not as tight as the beginning poem. The thoughts seem to wander a bit as thoughts do when someone is at the edge of sleep. Still, the poet’s control over the piece is clear. A comparison is set up between the way some older women “revise their faces with rouge or stitches” to the efforts of the speaker (or the poet herself) in the work of revising lines of poetry. Two kinds of vanity: in personal beauty and in a writer’s language. The poem opens with the narrator unhappy about her looks—she is beginning to “look like photographs / of Auden in old age.” She wishes her lines of poetry could be as incandescent as his.  At the end of the poem she achieves a sort of union with Auden “for the length of a dream at least.” And isn’t the length of a life comparable to the span of a dream?

“First Snow” seems to be a typical Pastan poem—very brief, with lovely imagery combined with a little metaphysical pondering. It begins: “The clouds dissolve in snow—/a simple act of physics / or the urge to just let go?”  A poem that might seem at first glance to be simple and light presents a little meditation. It also adds to the narrative arc of the book.

A number of poems focus on violent forces of nature, and on some of the terrible effects of humans on nature. In “Cassandra” the speaker is the Cassandra who warns of greater destruction to come. The poem begins with gentle images of butterflies, likely monarchs—or the surprising lack of the butterflies. “No one worries,” but the imagery gradually intensifies in violence until the warning at the end.

The poem “Root Ball” offers a marvelous description of a tree upended in a windstorm. “An asteroid has landed in our garden, / or a giant brain, ripped from its skull—”

“At the Edge” is another affecting poem. Once again the vastness and unimaginable territory of the eternal, of death, sit alongside the daily: tea and biscuits and someone’s loving hands. Isn’t that the way we live our lives, among the ordinary knick-knacks of a home, a street, a life, while we are never far from the edge of the precipice.  Her awareness of that cliff illuminates what so many of us forget to notice in the midst of our hurried and scattered daily existence.

In a poem called “River Pig” the speaker regrets her instincts to choose safety over risk. “. . . As if I want to arrive at death / quite safe from harm, and innocent, locking the coffin lid / behind me so nothing dangerous can get in.” Brilliant!

In one of the last poems in the book, “Ah, Friend,” the narrator makes friends with death and invites him in.

Linda Pastan’s poems are tight and clear. Nothing extraneous seeps in. She doesn’t use language to show off. She looks around, describes things most of us have seen or experienced, and weaves in a golden thread of illumination. When is a person most reflective? When does one consider the seasons of a life? Often, it is at the end of a day, when sleep has not yet come calling. What a perfect motif for this collection of poetry, written late in a fine poet’s career.