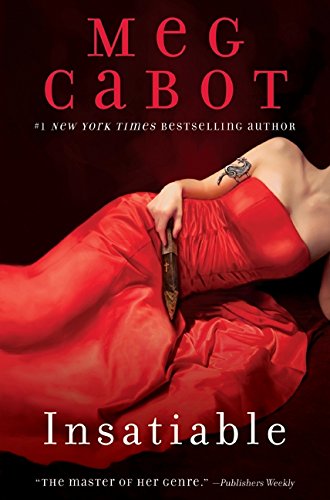 When I first saw the name Meg Cabot, I immediately thought this was a new young adult book by the prolific author of such titles as The Princess Diaries series and the Allie Finkle’s Rules for Girls series. I was surprised to discover that Insatiable is an adult paranormal novel.

As the literary and cinematic world is awash in all things vampire, Meg Cabot has thrown her hat into the ring and written a gothic, yet humorous take on the trend.

The tale follows the escapades of Meena Harper, the writer of a soap opera named “Insatiable.” What better way to climb in the ratings than to give the people what they want, and what do they want? Why, vampires of course. It may be in vogue, but Meena is sick to death of it. It’s not like they really exist after all, but what her boss wants, her boss gets—no matter how Meena feels about it.

Mary Lou, Meena’s pesky neighbor, insists she meet her brother-in-law, a rich prince from Europe named Lucian Antonescu who owns a real castle. A girl has to do her job to the best of her ability. Lucian could possibly serve as a perfect research subject and provide some great ideas for vampire story lines. Her neighbor left out one important fact: Lucian also goes by a few other names, one of which is the Prince of Darkness. He takes more than a passing interest in Meena and life is about to get more complicated—way more.

An impending war between vampire factions adds to the mix. Oh. And let’s not leave out Meena’s own supernatural powers: she knows when someone is going to die. A lot of really nasty vampires would love to have that ability. It would give them the heads up and allow them to circumvent the future. All they have to do is imbibe Meena’s blood. Simple enough—unless there’s a renegade vampire hunter on the loose and a furious vampire ruler intent on making her his mate.

Meg Cabot puts her own humorous spin on the trend of the moment. You can almost see her winking as she makes fairly obvious—though unnamed—references to Twilight and other of-the-moment vampire cinematic and literary fare. It’s like she’s sharing an inside joke with the reader and one can’t help but smile and chuckle as the story is read. She makes several direct references to popular culture that take an ancient storyline and imbue it with a modern and current sensibility.

In addition to telling a vigorous story with a rousing and often breathtaking plot, Cabot gives her readers a history lesson, interspersing the story with true historical facts that provide the foundation for Dracula, the vampire character.

There were a number of characters in the book and this reader found herself having to look back and reread sections to recall who was attached and connected to whom. This in no way took away from my great overall enjoyment of the story. The book comes to a firm conclusion, but the author has written the ending such that the story could continue with a sequel. I certainly would be eager to read it.