The Innocent One: A Novel 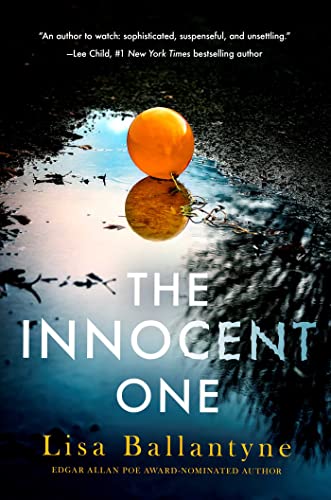 The Innocent One is Lisa Ballantyne’s latest novel, a psychological thriller that features Daniel Hunter as a criminal attorney who assumes the defense of an accused murderer with a darkness that mirrors Daniel’s own internal darkness. This story is both gripping and at times chilling and moves at a pace that will find the reader slowly and inevitably pulled in.

At the outset of story, Daniel is contacted by Sebastian Croll, who is one of several people who may be implicated in the murder of a university professor. Sebastian reached out to Daniel as Daniel was part of Sebastian’s defense team ten years before when Sebastian was accused of the murder of his 11-year-old playmate. In a case that drew vast media attention, Sebastian was branded the Angel Killer. Daniel reluctantly accepts Sebastian’s offer, but then Daniel is blind-sided by the departure of his wife Irene. In her departing note, she tells Daniel she is no longer able to accept the dark side to Daniel’s nature.

“it seems as if the darkness is there all the time—some deep unhappiness that exists in you—a place we (Billy and I) can’t reach.

Daniel is devastated. He desperately wants to reconcile with his wife and improve his relationship was his eight-year-old boy Billy. But his wife’s departing words ring true as Daniel finds himself struggling to maintain his self-control in his interactions with Billy.

Daniel searches for the roots of his past, hoping to find an explanation for this darkness. He was an orphan raised in foster care primarily by a woman named Minnie with whom he had a falling out. She was the closest thing to Daniel that he could call a family, but he was never able to reconcile before Minnie’s passing. This guilt that he holds is part of the reason Daniel carries the anger that he has. Daniel works with an investigator to discover who his father was. Daniel hopes that might provide an answer to why he is the way he is.

Daniel is driven to find a resolution for the tremendous internal unrest he bears of a violent past that he never came to terms with. He must do this for any hope of reconciling with his wife whom he loves dearly. This conflict is the driver for the story. Daniel must admit to himself that the dark nature of the person he represents mirrors the darkness within himself.

The writing is clear and concise, and the story moves at a consistent pace with each chapter pulling the reader deeper into the story. The tension builds slowly as there is much to lay out early on between Daniel’s marriage difficulties, his past involvement with Sebastian Croll’s previous murder trial, and Daniel’s search for his roots. And it is really Daniel’s search for his roots that is the crux of the story: Daniel must come to an understanding of what made him the person he is in order to come to grips with the uncontrollable anger that sometimes seethes up within him.

The pressure builds for Daniel as the media gets wind of Sebastian previous murder accusation. Daniel finds himself assaulted for his involvement in the new Angel Killer case by the swelling of public opinion against Sebastian. And things take a nasty turn when Daniel removes himself as Sebastian’s legal defense, one that not only threatens Daniel but his family. Daniel must find the answers in his own past before he can hope to save his family.

The Innocent One is the latest thriller from Lisa Ballantyne, an international bestselling author, whose debut novel The Guilty One was nominated for the Edgar Allan Poe Award.