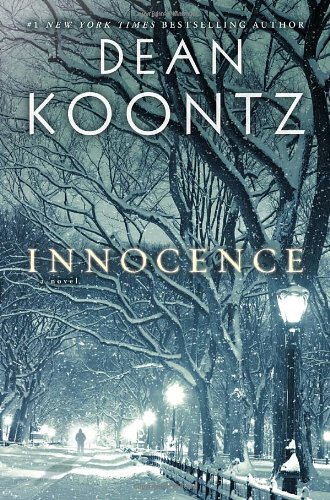 “Mystery and terror, the paranormal and romance—all combine to make Innocence a challenging and emotional experience.”

Dean Koontz's prose never fails to entertain, and Innocence is proof. Written in the first person, Innocence features Addison Goodheart, a child who is almost murdered at birth by the midwife when she sees his physical abnormality.

Addison lives with his alcoholic mother on a deserted farm in the woods for eight years until she banishes him from his home. Though she cannot stand the sight of his deformities and does not want him around her, he still loves her.

Addison traverses the country in the secrecy of darkness, ending up in a city that is far different from the place in which he was born. He keeps to himself, knowing whoever sees him will kill him. "Adopted" by a man who many also consider “defective,” Addison lives in three tiny concrete rooms deep beneath the city and ventures out only under the veil of darkness.

"Father" and Addison share a close bond until one night, when out on an excursion, they are noticed, and Father is brutally murdered. Six long years ensue with Addison living literally underground and in the shadows until one snowy night Addison enters a library through an underground tunnel in pursuit of a book. When a young woman's scream alerts him of intruders, he hides among the stacks until the pursuers leave. Addison has haunted these walls for a long time and knows exactly where she has hidden herself. Used to being scorned if he is noticed at all, he approaches her with caution, letting her know he only means to help her.

The woman, Gwyneth, is an enigma in her own right. Dressed like a Goth to conceal her identity, she informs him she is being chased by a "monster;" she also alerts him that she suffers from a social phobia and cannot stand to be touched. Addison tells her about his deformity and promises no physical contact if she agrees not to look at his face. The two form an unlikely alliance, and Addison discovers a companionship in their common bond: secreting themselves from others.

After a short time together, Addison falls in love with Gwyneth and resolves to defend her from the evil pursuing her. They travel the city amid a fearsome snowstorm in order to keep safe those whom Gwyneth loves and needs to protect. At the same time they seek to expose the man who wants to kill her. This section of the story is written as a night filled with horror, giving the reader the sense that this moment could quite possibly bring the end of the world.

The author frequently uses metaphor to great effect, for instance: "A greater quantity of stars pierced the black sky than I had ever seen before, as though the lamplighter of the galaxy had walked the spaceways overnight and rekindled all the suns that had burnt out during the last thousand millennia."

The sometimes lyrical writing and the fast pacing are a surprising but welcome combination. Koontz's chapters skip from Addison's point of view to Gwyneth's, adding backstory along the way. But Addison as a protagonist whose physical handicap proves so repulsive as to make others want to murder him rings implausible, for many people are born with deformities or physical challenges and manage to lead productive, fulfilling lives aboveground. It is not until the final chilling and unexpected ending that the reader learns the purpose of Addison's underground existence.

Mystery and terror, the paranormal and romance—all combine to make Innocence a challenging and emotional experience.