The Innkeeper's Bride (An Amish Brides of Birch Creek Novel) 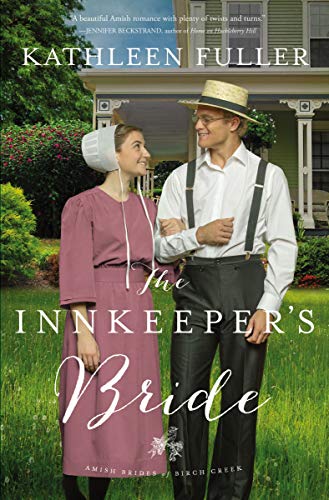 Selah Ropp moves back to her old hometown in the Amish community of Birch Creek, Ohio. While living in New York with her parents, she suffered an experience that left her depressed and anxious. On the advice of her therapist, she goes to live with her brother Christian and sister-in-law Ruby. Though she feels like a third wheel in their home, she does all the cooking and cleaning while Ruby and Christian are at work.

However, Selah, getting restless, wants a place of her own, which she can only accomplish if she can find employment and pay her own way.

While attending the wedding of her friend, she encounters Levi Stoll, who tries to make conversation with her, but she is apprehensive and acts aloof toward him. Levi is a gregarious guy who never meets a stranger, and though he is not interested in having a girlfriend, he is intrigued by Selah and puzzled by her manner.

Levi and his family have renovated their property and are in the process of opening it as an Inn. Though Levi's father Loren, sister Nina, and grandmother Delilah are there to oversee the work needed, when his father falls off the roof after repairing shingles and is laid up with a broken leg, they realize they need to hire outside help.

After learning of Loren's accident, Selah delivers dinner to their household, which is the Amish way. Delilah escorts her into the kitchen of their house for a talk. Delilah mentions hearing Selah is looking for work and offers her a job as the maid and part-time hostess. Somewhat hesitant and fearful of encountering Levi, Selah accepts, as this is her way to become independent.

"After she shooed Selah to the inn, Delilah went back into the kitchen and sat down at the table. She picked up her tea, satisfied. She was often surprised by God's timing, and this was no exception. When she saw Selah standing on their front doorstep with the heavy basket of food in her hands, it hit her that the young woman was the answer to several prayers. First, they did need a maid, and no one had answered the ad. Now they wouldn't have to scramble to find someone at the very last minute before they opened.

"Selah Ropp was also another answer to Delilah's prayers, her private ones. She had promised to stay out of Levi's and Nina's love lives and had fully intended to keep that promise, but that was before Selah moved back to town. She belonged to a responsible family--her brother and sister-in-law were teachers and had the trust of the community with their most precious possession, their children. Quality relatives were of the utmost importance. She knew firsthand how life could be when family wasn't what it was supposed to be.

"Selah's family was a good sign, but Delilah had fully made up her mind to intervene when she caught Levi looking at Selah during the last church service. Her grandson had always ignored female attention, and she had never noticed him paying attention to a particular girl before. Seeing him gazing at Selah had lit a lightbulb in her head. She had to jump at the chance to nudge Levi in the right direction. Of course, any woman would be happy to date her grandson. That was a given. The best way to make sure that happened? Put them in each other's proximity.

"She grinned again, the stress of the past few days finally starting to fade . . ."

Delighted to attain work she desperately desires Selah is somewhat intimated by Delilah, and she is also determined to keep her distance from Levi. There is something she finds attractive about the handsome young man her, yet she vows to remain single and not even think about romance.

As the novel progresses, one can't help but speculate about Selah's past. What happened to cause her such pain and the need for antidepressants? This keeps popping up giving depth and interest to Selah's character.

It is also humorous and charming how Delilah and her best friend Cevilla Schlabach are up to their matchmaking shenanigans. Typical of elderly grandmothers, they want to find romance for the younger set. Though Delilah is concerned with her grandchildren, now grown and still unwed, Cevilla, who's always been single wonders if Richard, her next-door neighbor and the love of her life will ever commit to her.

The crux of this story deals with communication. Selah, always afraid of doing or saying the wrong thing, is a sensitive young woman who has been hurt, therefore, she reads things differently. Levi, somewhat bullheaded and prideful is confused by Selah's demeanor, which has the two of them often at odds.

The same is true with Cevilla and Richard. Because they both are full of pride, they do not talk to each other or really listen, causing their problems. With their strong faith in God and devotion for one another, they demonstrate anything is possible.

The Innkeeper's Bride is a sweet and inspirational easy read sure to offer pleasure in life's chaotic and confusing times.