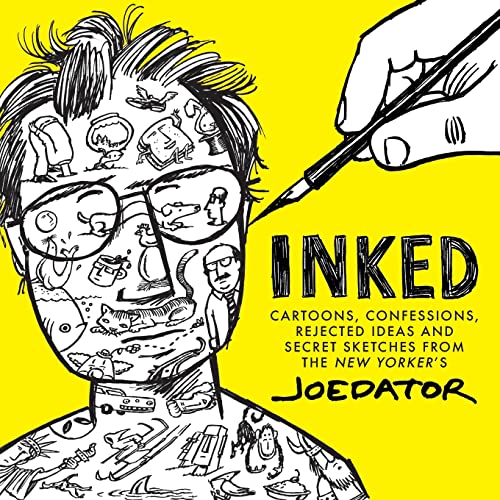 "Our research has proved that the chicken came not just before the egg, but before anything else in the known universe."

Joe Dator has written a cartoon book like no other. Included are his cartoons that were published in The New Yorker as well as those that were rejected. This is not a book on how to become a cartoonist but rather on Dator's own struggles, triumphs, and competitiveness in creating black and white pictures that would culminate in a book with humorous interjections. "In this book you're going to see a lot of my cartoons that have been published, a lot of cartoons that have never been published, and some juicy insider information about how those cartoons got made."

His sketches of the final products and his reflection upon the process that he uses takes the reader on a journey through this creative process. He calls himself a gag cartoonist, rather than a political or editorial one. This means that the cartoons are mainly a satire on daily living events, anthropomorphism, train rides, music, noise, writers, and other idiosyncrasies of everyday life. They are not only humorous, but each conveys a message or makes a statement. For example, the pictures of a tuba, clarinet, kettle drum, and saxophone marching up to an apartment and banging away shows people's angry reactions to noise in their environment. "I'd always wanted to draw anthropomorphic musical instruments, and I'd always wanted to depict them the way they appear in my mind: as a threat."

The cover itself, of a large face, heavily inked with black and white cartoon characters, will peak the reader's curiosity enough for him/her to open this book. The first cartoon of a balloon clown sitting on a couch with people at a party will produce the first chuckle. One cartoon depicts different kinds of coffee makers. But the old drip coffeemaker says to the woman making coffee in a modern bodem: "She'll come back. . . . She always comes back." A message that the tried and true gives us more satisfaction than modern gadgets with too many bells and whistles.

The cartoonist pokes fun at common situations without insulting anybody. Therefore, they are deemed politically correct. For example, he depicts God as a very large man with a beard and long white garment. Dator believes that concepts of God differ but, in most faiths, He is very large and all powerful. In his cartoons, he depicts God as much larger than ordinary people. "God knows I'm impressed."

The most creative pages are those with his sketches and doodles. "Some of my favorite cartoons have started with a doodle. And quite a few of them have ended with one." These pages depict animals, people, and fairy-tale characters in various stages of pencil shading. Some faces and bodies are distorted, and some animals show their skeletons. Great to study if you want to create doodles. (And always carry a sketchbook.)

The cartoon of the chicken and the egg is one of Dator's cleverest. It shows a professor teaching a class. "Our research has proved that the chicken came not just before the egg, but before anything else in the known universe." Then there are those cartoons about the breakfast face. For example, eggs are served as an ugly face. Those are pretty grim. "That's my goal: to simultaneously remind people of a thing and ruin that thing for them forever. If I can make just one person laugh, and thousands cry, my work is done."

Dator states that there is a lot of truth in humor but also a lot of lies. "Ostriches don't really bury their heads in the sand. But, to tell a joke one has to go with the widely held myth instead of the truth." He gives the example of Dustin Hoffman in the movie The Graduate as he asks Mrs. Robinson, depicted with a huge leg and foot on her computer, whether she was trying to get him to listen to her podcast. "In cartoons, you print the legend."

Even cockroaches could be depicted as a people. Kafka's Metamorphosis influenced his idea that humans could be transformed into giant cockroaches, serving food, eating in restaurants, and having sex. "I was not blessed with an overabundance of talent, just with a need to inflict my ideas upon the general public."

His cartoons depict people with food fetishes, and trees with faces and arms. One that conveys a potent message to children is a large father tree with an angry face and a small baby one that has fallen to the ground. The father says: "Were you listening to me?" (This cartoon could also have several other interpretations.) His sketches of faces, although caricature-like are very realistic. Examples are the ones depicting Captain Ahab in the movie Moby-Dick. Dator looked at tons of photos of Gregory Peck in the 1956 film. "In the end, my Ahab didn't look like Gregory Peck at all, proving that sometimes you need to do a lot of work just to figure out that you didn't need to do a lot of work." He also drew caricatures of the late Abe Vigoda, an American actor who played Salvatore Tessio in The Godfather.

One cartoon stands out as relevant to today's society and social media. It depicts a hunter pointing a rifle at a deer. He hesitates when he turns around to see forest animals taking videos with cell phones. A statement on how bystanders today take videos on their cell phones and these are often used as evidence in court. An example is the George Floyd case.

Dator thinks of birds as the dregs of the earth, hanging around garbage dumps, blank, inexpressive, and devoid of emotion and thought. "They are reptiles with feathers. The dregs of a mighty lineage . . . reduced to swinging from perches in pet shops and begging for crackers." (This may offend those who keep birds as pets.)

The examples above only scratch the surface of a book full of quirks and quarks of racy, punny satirical and hilarious gags showing the common idiosyncrasies of everyday life. It belongs on the shelves of every artist, cartoonist, and budding cartoonist.