The Inkblots: Hermann Rorschach, His Iconic Test, and the Power of Seeing 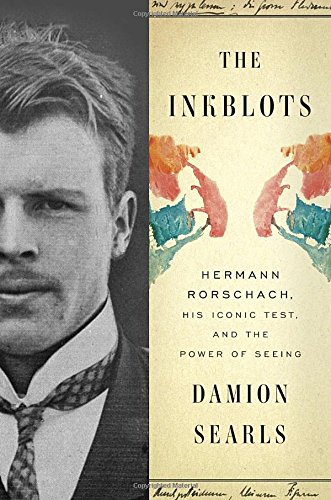 “What might this be?” Such an innocuous question—such profound results. No psychological concept has penetrated culture as much as “the Inkblot test” has.

“What might this be?” That such an innocuous question should tap our collective imagination, reveal the power of perception to both shape and reveal one’s character, and to prove a resilient tool for interpreting the human psyche is nothing short of astounding.

And yet Hermann Rorschach’s ambiguous yet carefully planned inkblot drawings, begun in 1917 and published in 1921, did exactly that. But not without enduring controversy.

In this broad yet richly nuanced book, literary translator Damion Searls gives to English readers for the first time the remarkable story of the Swiss psychiatrist whose iconic test provoked interest and head–shaking everywhere.

Rorschach trained as a draughtsman and visual artist prior to his psychiatric training with Eugen Bleuler, at the time the most respected psychiatrist in the world. It was Bleuler who labeled the disease we call schizophrenia, and coined the terms autism, depth psychology, and ambivalence. He spoke up for Freud in 1904, giving the non-academic doctor a crucial imprimatur.

Rorschach was a colleague of Jung, Freud, and other icons of 20th century psychiatry. More than that, Rorschach was deeply humanistic. His work intersected art, science, literature, anthropology, myth, religion, and popular culture. No psychological concept has penetrated culture as much as “the Inkblot test” has.

As Searls puts it, Rorschach’s discovery—reached empirically rather than advanced from any theory—essentially maintained, “that who we are is less a matter of what we say, as Freud thought, than what we see.” Or what we do and how we act.

While the test eventually fell out of favor in German–speaking countries, it became enormously popular in America following its introduction by Chicago child–psychoanalyst David Levy in 1924 (only two years after Rorschach’s untimely death from a ruptured appendix at the age of 37). It was Levy who invented play therapy, coined the term sibling rivalry, and translated Rorschach’s seminal essay into English.

“In America, it took on a life of its own.” After Pearl Harbor the military, with military zeal, screened soldiers for hidden pathology. It became widely used in school assessments, in employment, in prisons, in the courts. “The test in America was a lightning rod from the start,” pitting as it did the traditional reliance on tests that produced “hard numbers” against the “expert judgment” of an examiner who hands the subject a sequence of 10 ambiguous images, each on a white card, and simply asks, “What is this?” or “What might this be?”

Some idea of Rorschach’s capacious mind can be gleaned from a letter he wrote in his youth to Tolstoy. His dream, he wrote to the intellectual giant,

The inkblot test, unchanged since 1921, reveals a surprising amount about the psychology of perception because a blot “is not just a blot, at least if it’s any good.” His deepest insights were that pictures have meaning, and that “the image itself constrains how you see it.” When test subjects asked for guidance, Rorschach would casually say, “Different people see different things.”

But differences are precisely what are revealing. Controversy continues today about the meaning and reliability of the inkblot test. Searles’ account of Rorschach’s posthumous reputation is equally rich with entertaining and unexpected details.