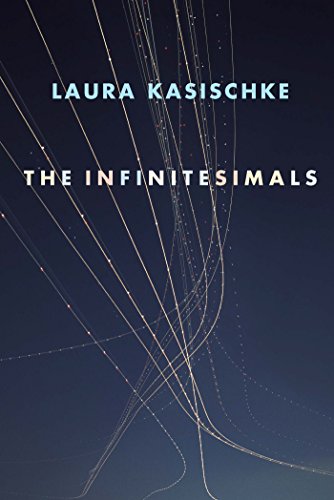 Laura Kasischke, author of nine novels and eight previous collections of poetry, has established herself as a writer of passionate, vivid works of poetry and fiction. Her poetry book Space, in Chains, published in 2011, won the National Book Critics Circle Award.

In her latest book of poetry, The Infinitesimals, she builds her poetic narrative layer by layer, never in a straightforward way. The world in her book is strange and sensual; almost, but not quite familiar. Contradictory impulses keep the poems anxiously alive. Phrases and images recur, but within new contexts, so that moments of illumination keep emerging, although the reader may never completely emerge from the dark forest of the poet’s tale. Or the reader that emerges is somehow different from the one who entered the book.

Perhaps the small child in “This is Not a Poem/Fairy Tale” is emblematic of the experience of reading Infinitesimal. A toddler, abandoned by his parents in deep woods, according to a news story, survives . . . and we the readers have to keep on imagining his survival, the narrator warns, along with the trees, and the moon, and the small mercies: “this summer’s been a warm one. / And someone tied your tiny shoes for you.” We become the lost child, surviving. Who has not felt like that?

The book’s title, The Infinitesimals, leads one to consider what tiny, tiny things are at the center of the author’s attention. Are they the cells in the body, which can form a life or go wrong, causing disease or even death? Are they the glimmering insights that we accumulate as we travel through life?

In Kasichke’s poem “Abel de Larue, 1582,” the peculiar story of a real person, thought to be a sorcerer but probably a schizophrenic, is alluded to. The poem mentions “the impossible forever” and ends with: “Now, just a few of the billions who died before us / at home in their tiny shining places.” Perhaps the infinitesimals are lives that have come and gone, flickering out like stars, or staying with us in some way, as stars do, visible or not.

Throughout the book, illness, suffering, and death are challenged, rather ineffectively, by sorcerers, doctors, and lovers, as well as masks, spells, and religion. In “Nine Herbs,” the poet devises an incantation against modern scourges. She refers to nine illnesses and announces battle against them:

We curse your many sacred names!

We boil and blast and bathe and salve and sing!

In “Masks” she mentions “the beautiful hallucinations of December,” dressed as angels, wise men, and even as “the Ordinary, the Annoyed . . .” and then focuses on a recovering addict, who alone is not masked, and who really sees:

His eyes have burned

holes in his radiance.

Instead of a mask, he has

This is followed in the next poem, “Game” (which the narrator admits she always knew was “no game”), with

The effect of the book, however, is not one of unmitigated suffering. Some of the images are gorgeous, and most are arresting, but the juxtapositions are unusual. Repeatedly there is that feeling of almost, not quite, recognizing the world in the poems. Images and phrases recur.

There are four sections in the book. Each section is named after the title of a poem that resides in a different section of the book.  The author keeps readers slightly off-balance. Additionally, four individual poems, each in a separate section of the book, refer to a “Beast of the Sea.”

What is this beast? In the last of these poems the sea seems to be oblivion, or a world with its tragedies unremarked upon, or the act of love that leaves behind—nothing:  “Or a kid//picking all the flowers in my garden / to give to me.”

The fourth section of the book is called “The Dog, About to Pounce, Looks Back,” which is also the title of a poem in an earlier section of the book. In that poem, Kasischke compares life to “the table / set for celebration / on a glacier melting a little more every day,”  a metaphor that is fearless, original, apt.  In the last section of the book the poet does pause, look back. She reconsiders a little, like a person thinking over what was actually a good life after all.  The penultimate poem “Over” ends with

The world, small and full of love.

And even better never to have understood this until now.

in which we all

have, at one time, lived

in terror, in safety.