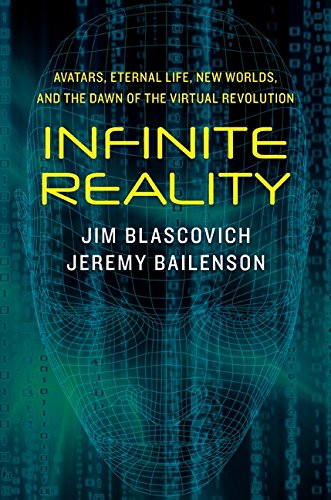 There was some hubbub recently about an IBM supercomputer beating two “Jeopardy!” champions. Though “Watson,” Big Blue’s new heartthrob, doesn’t meet the strict definition of Jim Blascovich and Jeremy Bailenson’s Infinite Reality, its brainiac powers could power a regiment of avatars and web trolls to do . . . what?

Well, pick your poison. Virtual reality is the latest alternative universe, not unlike Disneyland or the Shaker communities of earlier eras. It is the ultimate synthetic experience, a trawl down the remote rapids of the internet—a river in which you don’t drown if you fall overboard.

The bleeding edge of our society has already taken advantage of this electron revolution. Why else all those persistent Hollywood rumors about certain stars who’ve had their entire bodies digitally scanned so that, long after they’ve departed this hallowed orb, they will remain box-office catnip and swell the coffers of their estates. This makes perfect sense. After all, Tom Cruise isn’t an option, he’s an essential element in our lives, like B-vitamins.

One wishes a greater seriousness toward this subject, to poke and prod the ethics of personality downloads, life after death, and the trade-offs between living in the world and its broadband facsimile. Alas, it is not to be.

Messrs. Bailenson and Blascovich, professors at Stanford and the University of California respectively, must know their topic . . . they simply must. But the book they’ve produced is so randomly patched together that the hapless reader’s overarching question is “What creature are they writing for?” It contains neither thesis nor message, and there’s little to catch our attention. We jog from topic to topic with our friendly authors, who seem to know so much they’ve decided to tell it all to us—like that uncle who just won’t shut up after the first toddy at Thanksgiving.

This is an odd circumstance to say the least because life on the web lends itself to provocation at one end and vigorous debate on the other. Yet Professors Bailenson and Blascovich have taken their topic and injected it with Demerol. If it were a student thesis, one doubts whether either would give it much of a grade, stitched as it is with examples from magazines, newspapers and journals but no real viewpoint.

There is the invisible gorilla at least, the sine qua non of perceptual subjectivity experiments.

In it, people were asked to watch a video and count the number of times people pass a basketball back and forth. A person in a gorilla suit walked into the middle of the players, stopped, beat its chest and exited. Roughly half the viewers never saw the gorilla. It’s one of the keys to sleight of hand.

Similarly, there are many events, anecdotes and happenings in Infinite Reality. If there was a theme in the book, it passed me by—like the inconspicuous simian.