Indian Sun: The Life and Music of Ravi Shankar 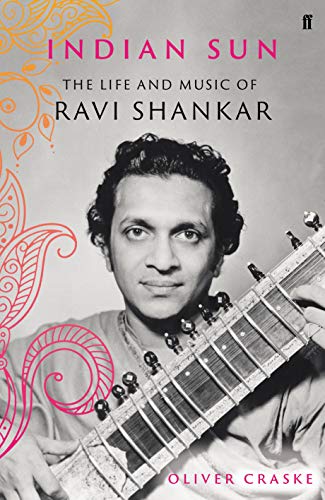 Near the end of his intimate biography of Ravi Shankar, the author, Oliver Craske, describes his first meeting with the famed sitar player, global ambassador for Indian music and culture and for more than half a century a veritable bridge between East and West.

Invited to help write Shankar’s autobiography sometime in the 1990s, Craske found himself in a state of awe that doesn’t seem to have dissipated since then. “Ravi shared some of his deepest confidences with me,” he writes. He adds that some of the information Shankar disclosed would have to wait until after his death.

Craske, the author or Rock Faces, doesn’t disappoint readers. He goes back to Shankar’s earliest days, traces his epic journey from 1920, when he was born in Benares, India, until 2012, when he died at the age of 92 in San Diego, California.

Indian Sun is the first biography of Shankar. It will probably be the definitive work for now, though it may not be the best introduction to Shankar’s life and work.

For a stunning and heart-warming introduction to Shankar, go to FaceBook and watch the master musician play at the Monterey International Pop Festival in 1967, when he held the crowd spellbound and received a well-deserved standing ovation.

Craske suggests that Shankar’s fame peaked in 1967, the year his autobiography was serialized in Playboy, and also when his first U.S. album, The Sounds of India, was released. Shankar actually wrote three autobiographies, as though one wasn’t enough to cover his travels, recordings, concerts, and his role as an icon for peace on the world’s stage.

Indeed, one autobiography wasn’t enough. After he’d write one book, he would go on creating new chapters, giving more performances and recording more of his music.

Craske allows Shankar to speak for himself and to analyze himself. Shankar is surprisingly insightful about the emotional pain caused by his absent father, his many relationships with women from all over the world, and his complex interactions with his two daughters, Norah Jones and Anoushka, from two different mothers, both of whom went on to become successful musicians.

He also had a son, but his son didn’t follow in his father’s footsteps, at least not for long.

Craske doesn’t draw ironclad ties between Shankar’s traumatic childhood—he was raped repeatedly by a family member—and his music. But he suggests that his early trauma created the conditions for him to become a great artist.

At the same time, the trauma of rape and his absent father made it difficult for him to stay put for long. His need to keep moving, he felt, had “something to do with my never having a father.” Shankar added, “It’s a case for any psychiatrist to find out why I have been like this.”

Indian Sun is long on psychiatry, but not quite long enough on contemporary history. Still, Craske points out that Shankar’s star began to rise at about the same time that India became an independent country.

Perhaps he couldn't really find himself and express himself until after the nation broke away from the British Empire.

Shankar was also deeply trouble by the 1947 “Partition,” when India was divided into two separate countries and Pakistan was born.

Fifty years after that social and political traumatic, Shankar explained, “I was deeply hurt by the partition of our country and its consequences—the ruthless communal killing of multitudes and the tribulations of the millions of refugees, uprooted from their homes and forced to cross borders.”

Shankar crossed borders willingly and eagerly his whole life. Craske follows him around the world, from India to the Soviet Union and the United States, and to Brazil, Australia, and beyond.

Craske writes a great deal about the sitar—Shankar’s constant companion—about his style of playing and the substantial differences between Indian music and western music.

Some of the time one can’t help but laugh as when The New York Times identified Shankar in 1956, during his visit American tour, as a “Hindu guitar player.” Whatever the sitar was, it definitely wasn’t a guitar, and Shankar wasn’t a rock star, though he rubbed shoulders and more with the likes of the Beatles’ George Harrison, who helped to bring Indian music to the West, a story Craske tells lovingly.

At more than 650 pages, Indian Sun is not a book to be read in one sitting. It offers too many details to do that without mental indigestion. It’s a biography to be savored slowly, like a good curry.

The illustrations enhance the story, especially one that depicts Shankar at the age of 13 in London, with bare feet and a turban around his head. Both hands are on the sitar which looks bigger than the performer, who stood 5’ 3,” but who always seemed much taller than his actual height.

Indian Sun would make Shankar himself proud. The book might also help his two daughters further their understanding of their deeply troubled and amazingly creative father who brought music, love, and compassion to nearly every place in the world. “There is no boundary between the music and myself,” Shankar said. “I am the music.” This biography reveals the truth of that remark.