Indecent Advances: A Hidden History of True Crime and Prejudice Before Stonewall 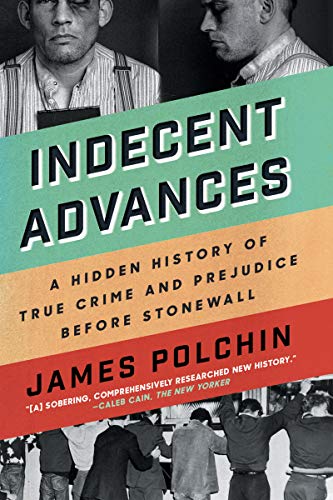 Near the end of James Polchin’s original and revealing book about sex crimes involving gay males, he discusses the artistic scrapbooks of Carl Van Vechten. Van Vechten is a now an all-but-forgotten writer and artist of the mid-20th century. He was a former arts critic at the New York Times, author of Nigger Heaven, a once-scandalous 1926 bestseller, and famously judged many of New York’s grand drag balls during the Roaring ’20s.

Polchin carefully considers Van Vechten’s artistically fashioned scrapbooks. He writes, these “crime story collages . . . constantly echoing each other across time and space, illuminating not just the particulars of the crime, but how such crime stories are connected.” Much the same can be said about Indecent Advances.

Through extensive research, Polchin has collected innumerable long-lost newspaper accounts of anonymous sex crimes involving gay men and, through careful analysis, given them historical and political meaning. He uses the accounts to review the initial police report regarding what allegedly happened and to assess the newspaper coverage, often portraying the incident as a scandalous, headline-grabbing event. He shows that the media report was not simply about one man (or more) killing or seriously injuring another man but gained notoriety because the incident was defined as an illicit homoerotic encounter.

Indecent Advances is a well-chosen title for this book. Many of the sex-related crimes considered were allegedly the result of an “indecent” encounter or advance at a bar, park, beach or simply on a street; many of those involved were considered loiters or “floaters.” The initial public encounter often led to more intimate private follow-up get-together in a hotel room or one of the men’s apartment or home at which the killing, wounding, or robbery took place.

Many of the men involved were either current or former military personnel or married men (often on a business trip) out for some fun. Most striking, many of the incidents discussed involved (apparently straight) men cruising gay men in order to rob them.

The author considers reports of gay sex crimes from across the country to paint a vivid picture of not simply individual crimes and the men who committed—and suffered—them but to illuminate how the nature of homosexuality and crimes involving gay men have fundamentally changed during the half-century between World War I and the Vietnam War era of the ’60s.

The book focuses on a critical period in U.S. history during which the nature or social meaning of “homosexuality” was in transition. Polchin details how the changing characterization of homosexuality by the police, the media, psychologists, and society in general was reflected in the classification and conceptualization of gay sex crimes. He follows the arc of this change in how earlier forms of categorization evolved from “impure” to “pervert” to “psychopath” to—with Stonewall—“social movement.” This shift in classification follows the process of the decriminalization of same-sex relations.

Amid the numerous anonymous stories Polchin reports on, he discusses a series of more “celebrated” or notorious crimes. These include: (i) revelations in 1920 of the gay scene at the Sailors and Soldiers YMCA in Newport, RI, home to the Naval War College, and the outing of a prominent local pastor; (ii) the notorious Leopold and Loeb trial in Chicago in 1924 that involved two wealthy University of Chicago students who kidnapped and murdered a 14-year-old boy in 1924; (iii) the 1944 case involving Lucien Carr, a Columbia University student who killed an older “friend,” and the ensnaring of William Burroughs, Allen Ginsburg, and Jack Kerouac; and (iv) following a 1954 gay killing in Miami, in which revelations followed about a “pervert colony” of homosexuals in the greater city involving 500 to 5,000 then to 8,000 and fueled a police crack-down against gay men at local beaches and nightclubs.

Polchin concludes his valuable study by bringing the lessons he carefully recounts from the 1920s to the critical 1960s and the significance of the gay rights movement. “What happened at the Stonewall bar in June of 1969 when patrons dared to push back against the violence of the police,” he writes, “was as much about the political consciousness of the era as it was a reaction to the forces that had criminalized queer people for decades.” Now, a half-century later, the battle continues.