The Incurable Romantic: And Other Tales of Madness and Desire 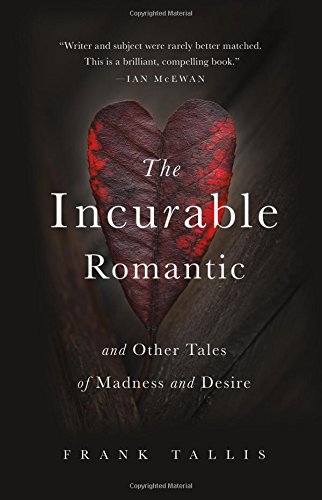 “All You Need is Love,” says the Beatle’s hit song. It promises butterflies and rainbows. But the more interesting aftermath is what happens when “all you need” is denied or, worse, ripped away? The high incidence of depression and suicide following divorce or amorous break ups illustrates how our idealization of love ironically arms its destructive power.

Frank Tallis’ The Incurable Romantic and Other Tales of Madness and Desire is a delicious read about the terrifying, inexorable, and sometimes brutal power of romantic passion—always thrilling, sometimes desperate, shockingly dark. It is a book about the disparity between romantic ideals and our experience of love as it really is. It explores, too, the astonishing ways in which disappointed lovers cope with the disparity.

Tallis is a British psychologist and author of several award–winning books. Here he provides a dozen vignettes of patients literally gone mad with love. They are drawn both from private practice and state institutions where he is a consultant. His characters are sharply rendered and nuanced in the manner of good fiction, but they also show the all too real dark realms of besotted minds. Boundaries dissolve between normal and aberrant.

Lovesickness is well-known in our culture—an illness unique in being curable only by the one who inflicts it. Well into the 18th century, physicians acknowledged lovesickness as a physical malady like having pneumonia or kidney stones. Its symptoms could be fatal (and still can be) as shown by the surprise ending of E. M. Forster’s short story, “The Life to Come.”

Jealous protagonists are sprinkled throughout literature. One of Tallis’s patients is obsessively jealous of her partner. “All right—I suppose I can be quite controlling, possessive—whatever. But so what? If you love someone, isn’t that just natural?” she says, illustrating how love and jealousy are inextricably entangled, and how false inferences inevitably lead to false conclusions.

Jealous love and domestic violence go hand in hand. One in three American couples have a history of domestic violence arising from suspicion, mistrust, and sexual jealousy. One third of murdered women worldwide are done in by husbands or boyfriends, as Aaron Ben–Ze’ev and Ruhama Goussinsky recount in their startling book, In the Name of Love. Love is intrinsically ambivalent and can perpetrate the worst of evils in its name. The Internet has opened up a channel “among young couples eager to explore a ‘polyamorous’ lifestyle, yet many of them confess that overcoming jealousy is a major obstacle.”

One of Tallis’s patients is convinced that her dentist is secretly in love with her. Impervious to rational appeals, her obsessive stalking forces him to flee the country. Another man squanders his considerable wealth on 3,000 prostitutes. He needs them to fall in love with him, but then discards them once they do.

Another character grows increasingly narcissistic and infatuated with his own reflection, eventually dismissing the longstanding companion with whom he had been deeply in love. The story of a man falling in love with himself shows that “Selfie culture and social media have made it clear that human beings are highly prone to self–obsession.” Many celebrities are “completely enabled to step out of role . . . Even in the consulting room,” which makes trying to help them “almost impossible.”

It would have helped readers if Tallis had given a better understanding of how people fall in love in the first place. What psychology calls limerance describes the sap-rising, head-over-heels feeling of buoyancy, of walking on air as we are flooded with intrusive thoughts about the potential beloved and an acute longing for reciprocation while a general intensity of feeling pushes other concerns to the background.

Psychoanalyst Ethel Person laid out the steps of limerance in two excellent books, Dreams of Love and Fateful Encounter and By Force of Fantasy. In addition to fantasies about the ideal beloved we harbor fantasies about romance itself. We ask it to satisfy longings for attachment, dependence, sex, and companionship. Romantic love condenses and conceals a range of subsidiary wishes and makes impossible demands, which is why it can fall apart.

These dozen vignettes reveal times that Tallis is unable to do anything to assuage his patient’s problem. While psychotherapy is sometimes impotent, he seems to be saying that the negative problems of love deserve more serious consideration. High schools provide sex education, so why not love education or relationship education? So many young people who are not yet emotionally mature undergo confusing infatuation, agonizing rejection, and suicidal heartbreak. “If as a society we agree that love is the most important thing in life,” he asks, “shouldn’t we prepare young people for love and help them make the most of it?”